For the Sake of Love: The Jewish Women Left Behind

Home > Egypt > For the Sake of Love: The Jewish Women Left Behind
Diaspora

We never heard these stories. Forgotten stories of Jewish women who lived in Egypt and chose to remain there with the Muslim men that they loved, even though their families had immigrated to Israel. It’s time we shared these stories. 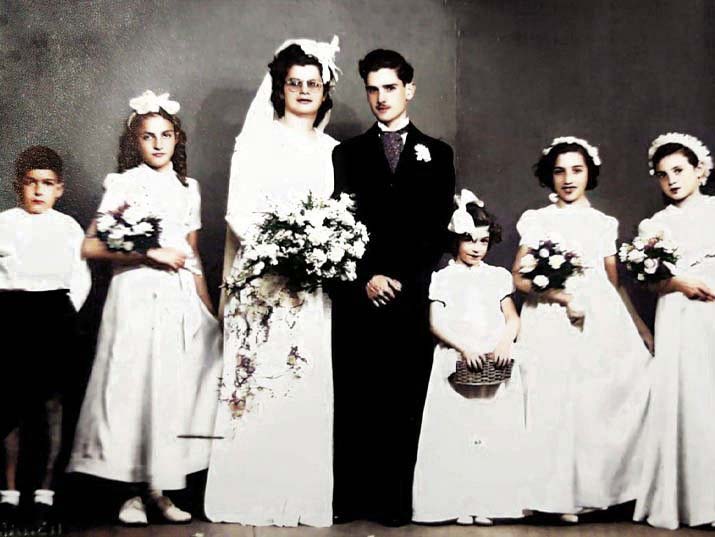 A Jewish wedding in Ayala Deckel’s family, held in the Great Synagogue in Alexandria

She boarded the ship along with the rest of her family. Everyone was excited about the voyage that would eventually bring them to Israel, the journey that would begin the great change in their lives. Yet, her heart was heavy. She didn’t really want to leave Egypt. A few minutes later, she muttered casually, “I forgot my bag by the ship, I’ll be right back.” That was the last they saw of her. She left the ship behind and returned to her lover in Egypt, choosing to stay there with him.

We never heard these stories during our childhood nor later on. The stories, like the women concealed in them, were left behind. Jewish women who lived in 20th century Egypt and who chose to remain there, though their entire families had immigrated to Israel. Women who chose to marry outside of the Jewish faith, who in most cases were expelled from home and family, left alone in a Muslim country. It’s time to tell their stories.

One of them was my aunt, Rachel. I only became aware of her existence a year ago.

My grandfather had a large, warm and noisy family. They were five brothers and one sister. Their pictures always stood on the bookcase in my grandparents’ home. It turned out that someone was missing from the photos. Rachel wasn’t in any of them.

Rachel had fallen in love with a young Muslim man and married him when the family was still living in Egypt. Her father, my great-grandfather, did not approve of the marriage and banished her from the family home. He also demanded that everyone sever ties with her. But one sister refused to comply and kept in touch with Rachel despite her controversial marriage. Her name was Susan, I called her Tante Zuza. She would visit Rachel’s home frequently and even developed a close relationship with her son. Until it came time to immigrate to Israel.

Egypt in the early 20th century had been a cosmopolitan country to which many Jews from the Mediterranean basin had immigrated because of its economic and business potential. The essayist and author Jacqueline Kahanoff describes her childhood in Egypt at the beginning of the previous century thus, “In my youth it was only natural for me that Cairo’s residents understood one another even though they spoke different languages and had names that disclosed their different origins – Muslim, Arab, Christian, Syrian, Greek, Armenian, Italian. . .”

The Jewish community developed within this diverse climate; a traditional community with unique characteristics that set it apart from the others around it. At the same time, it was a community rooted in the local culture. Jews, Christians and Muslims had strong mutual ties of business and friendship. Marriage ties existed as well.

The turning point in the life of the Jewish community came precisely with the establishment of the State of Israel. In 1948, the war between Israel and Egypt reached the streets of Cairo and Alexandria, with a series of explosions and acts of sabotage in Cairo’s Jewish Quarter. The streets were no longer safe and the Jewish community was affected directly, its members began to emigrate from Egypt to Europe, the United States and Israel.

The writings of contemporary rabbis on the issue of conversion suggests that intermarriage was a common phenomenon. They were preoccupied with it and with the dilemma of whether or not to convert a spouse who marries a member of the Jewish community.

In one of his halakhic rulings, Rabbi Ovadia Yosef wrote that in his opinion it was worth converting a Christian woman who marries a Jew even if she does not keep the commandments, arguing that if she was not converted, the couple would be likely to seek comfort among the Christian community. Rabbi Yosef believed that in the interest of keeping members in the community, it was better to convert the Christian spouse than to lose the entire family.

In another case, Rabbi Aharon Mendel HaCohen told of a young woman who wanted a young Muslim man to convert so that they could marry. The rabbis of the community agreed and married the two in a religious Jewish ceremony. However, two days after the conversion, the new convert decided to return to Islam, and took his Jewish wife with him. Since then, Rabbi Mendel HaCohen wrote that he was no longer willing to convert Muslim partners.

The famous actress and singer Leila Murad is another interesting example. She was born Lilian to a devout religious Jewish family. Her father came from Iraq and her mother from Poland. Lilian, who began singing when she was fourteen, was called the “Cinderella of Egyptian cinema.” In 1947, she married and converted to Islam. Her family, who immigrated to Israel, rarely spoke of her, perhaps one reason she is not more known in Israel.

Another was Soad Zaki, a famous singer and actress in Egypt who also married a Muslim. They eventually divorced, and he moved to the United States while she immigrated to Israel. Later, the couple renewed their relationship and he came to live with her in Israel. After both had passed way, they were buried alongside each other here.

Returning to my family—in the 1950s, when it was no longer possible to remain in Egypt, my aunt, Tante Zuza, finally left Cairo and her sister Rachel. For many years, they lived in enemy countries and all communication between them ceased. During the Six-Day War and the Yom Kippur War, they were on opposite sides of the border. While fierce battles were waged between Egypt and Israel, each worried for her family and country, but also for the sister on the other side. During those years, neither one tried to contact the other nor did they speak openly about the other. Both kept the other sister’s existence a secret. In the Israel of those years, it was disgraceful to say that you had a sister who had converted to Islam, a sister who was on the side of the enemy. In Egypt, it was extremely dangerous to say that you were from a Jewish family. Each sister lived her life. The secret remained buried in their hearts and was never spoken aloud.

After the signing of the peace treaty between Israel and Egypt in 1978, Tante Zuza, who lives in Israel, managed to contact her older sister Rachel in Egypt. My cousins ​​who witnessed the first conversation between them said that Tante Zuza sat for half an hour crying and hugging the phone receiver as if it were a human body. I imagine Rachel did the same on the other end of the line, in Egypt.

The discovery of this story shook my world. It was during the COVID pandemic, the whole country was in lockdown, and I found myself sitting at home trying to imagine what had happened back then and what was happening right now with my Muslim relatives in Egypt. I couldn’t stop thinking about how one event completely changed the fate of our family on both sides of the border.

I started researching, asking and gathering every sliver of information and very quickly, I discovered that this story was not unique to my family. Many more women had found themselves in similar situations. Women whose stories had been silenced, women whose voices have not been heard in Israeli society to this day.

Though I tried every way possible to find them, I wasn’t able to contact my Muslim family in Egypt. Instead of meeting them, I sat down and wrote. I let my thoughts travel and in my mind began to weave together the gaps that had emerged among the historical facts. This is how my [Hebrew] book Habaytah Haloch VeChazor (“Back and Again”) came into being. It tells the story of a journey between the present and the past, between secrets and facts. It is a book that strives to give voice to silenced stories and provide a meaningful platform for the women who chose to remain behind.