Thank You for Smoking: Abd al-Ghani Al-Nabulsi and the Ottoman Tobacco Controversy 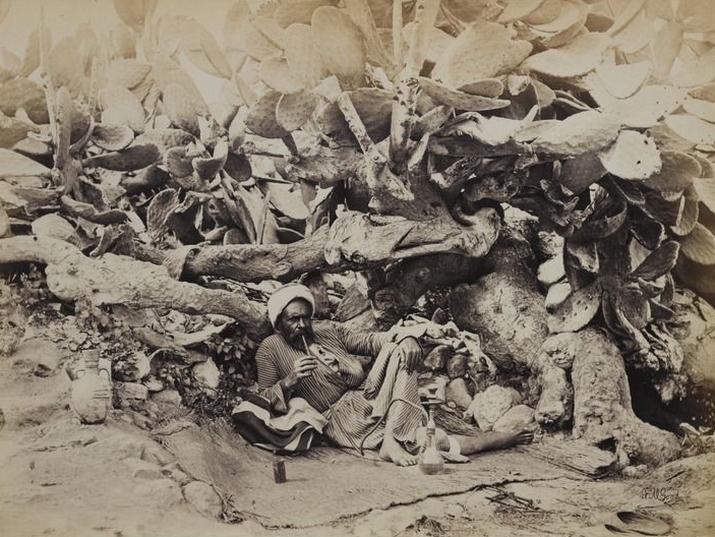 The Middle East is in love with cigarettes. Even as tobacco use is declining globally, in Beirut, Cairo, and Riyadh — as well as in Tel Aviv — smoking remains widespread, and in some countries is even increasing. According to a recent report, Jordan, for one, has one of the highest rates of tobacco consumption in the world: more than 80% of Jordanian men are regular smokers, averaging 23 cigarettes a day.

Although tobacco seems woven into the fabric of daily life in the region today, it was not always so. When tobacco, native to the new world, was first introduced in the Ottoman Empire in the mid-sixteenth century, it was the topic of fierce disagreement. Was tobacco healthy or harmful? Is smoking permissible in Islam, or should it be forbidden?

Preachers, poets, religious leaders, and government officials all weighed in on the debate. But one of the most prominent voices belonged to Abd al-Ghani al-Nabulsi, a unique figure and an influential Damascene scholar, mystic, and intellectual. Al-Nabulsi wrote a treatise in praise of smoking, Al-ṣulḥ bayn al-ikhwān fī ḥukm ibāḥat al-dukhkhān (“Making peace between brothers on the issue of legalizing smoking”); a 1774 manuscript of the book, copied from the author’s own handwritten version, is just one of the many works by al-Nabulsi in the collection of the National Library of Israel. How did this reclusive Sufi come to be one of tobacco’s main defenders?

When tobacco first came to the Middle East via Europe, it was considered an innovative medical treatment for everything from burns to poisoning. However, by the first decade of the seventeenth century, as more and more men and women took up recreational smoking, resistance to the practice also increased. One of the basic issues that tobacco faced, from a religious perspective, was that, as a novel product, it was not mentioned in the Quran, the hadith literature about the Prophet Muhammad and his sayings, or in the authoritative codes of Islamic law.

In the face of this silence, tobacco’s numerous opponents pounced. Reasoning from analogy–qiyas, a common method in Islamic jurisprudence–they argued that tobacco could be compared to that other prohibited substance, alcohol. Tobacco, critics argued, produced similar intoxicating effects, as exemplified by the dizziness suffered by new smokers.

Other than such scriptural arguments, critics claimed that tobacco was detrimental to health: reducing strength, causing bad breath, and dulling the senses. Smokers also were dirty, their clothes covered in smudges and ash. What’s more, this physical contamination, it was claimed, was accompanied by an even more dire moral impurity. Smoking caused idleness, and its newness– “deviating innovation” (bid‘a in Arabic)– was taken as inherently threatening. As James Grehan has written in a comprehensive article on the subject:

In the most extravagant visions, the ﬁre and smoke that accompanied the act of lighting a pipe conjured up hellﬁre and eternal damnation. Critics warned that smokers would appear on the Day of Judgment with blackened faces and hookahs hung around their necks; until that time, they would burn in their graves, like the tobacco in their pipes.

The opposition to tobacco was not limited to intellectual circles and the arguments of the learned. The Ottoman authorities made numerous attempts to prohibit and confiscate tobacco. Though ultimately unsuccessful, these crackdowns were accompanied by brutal and bloody enforcement of the rules.

Nabulsi did not start out as smoking’s premier champion. Born in Damascus in 1641 to a family originally from Jerusalem, al-Nabulsi was a prolific Sufi mystic and scholar who authored over 250 works. Extremely wide-ranging in his interests and expertise, al-Nabulsi wrote commentaries on books by earlier mystics, especially the thirteenth century master Ibn Arabi, as well as poetry, travelogues, books on architecture and agriculture, and law. In his lifetime and for more than a century after his death, al-Nabulsi remained profoundly influential, both through his writings and a wide circle of students. It is no wonder then that the National Library houses manuscripts of twenty-six of his works, as well as several others that he himself copied or owned.

Al-Nabulsi defended smoking against its detractors on multiple fronts; while he only became a smoker himself during the course of his travels to Mecca over a decade later, his arguments were already forceful and fully formed when he composed the book in 1682.

Concerning health, al-Nabulsi denied that there was a link between smoking and illness, and argued that the physicians who prescribed tobacco as a remedy knew their business much better than critics untrained in medicine.

In fact, his book on smoking opens with just such medical arguments. In the first lines of the composition, al-Nabulsi praises God that tobacco is good for the body: drying the humors, removing phlegm, helping the intestines digest food, improving the mind, and all kinds of other benefits. “Apart from these, its usefulness against poison has been demonstrated in the medical literature,” he adds, “especially against the poison of the scorpion.”

But his more interesting arguments touched on tobacco’s status in Islamic law. He countered the claims of those who dismissed tobacco as a “deviating innovation,” saying that they were deluded by prejudice, ignorance, and knee-jerk conservatism. Al-Nabulsi writes that he chose to author the treatise not because he likes smoking or in order to join the debate on tobacco for its own sake, but rather to find the truth of the issue. He rejects the use of qiyas by those who argued against tobacco, and says if no scriptural source explicitly bans the substance, it should be permitted. While the context here only concerns the permissibility of smoking, the distinction between the truth and the law, and between the sublime mystics who perceive the former and the more limited doctors of the law who deal with the latter, is a central and recurring theme of al-Nabulsi’s thought.

At heart, and fascinatingly, al-Nabulsi’s arguments amount to a defense of a value that to us is quite familiar, but which was then a new and radical concept: fun. In making room for smoking, Nabulsi was also arguing that greater space be given to private life and private enjoyment, so long as it did not explicitly violate the strictures of Islamic law.

To a great degree, al-Nabulsi was following in the wake of social changes that were already underway. Tobacco, like coffee before it, became so popular precisely because it was convivial, encouraging conversation and the blurring of social boundaries; this was especially true in the coffeehouse, where members of different classes could meet, relax, and talk, their gatherings fueled by the stimulants in their smoke and drink. Writing on the cusp of modernity, al-Nabulsi was defending not just smoking but a central part of what it meant to be modern itself.