These rare photos offer a glimpse of a monumental Ottoman project, designed to transport "hajj" pilgrims and unite a vast Islamic realm 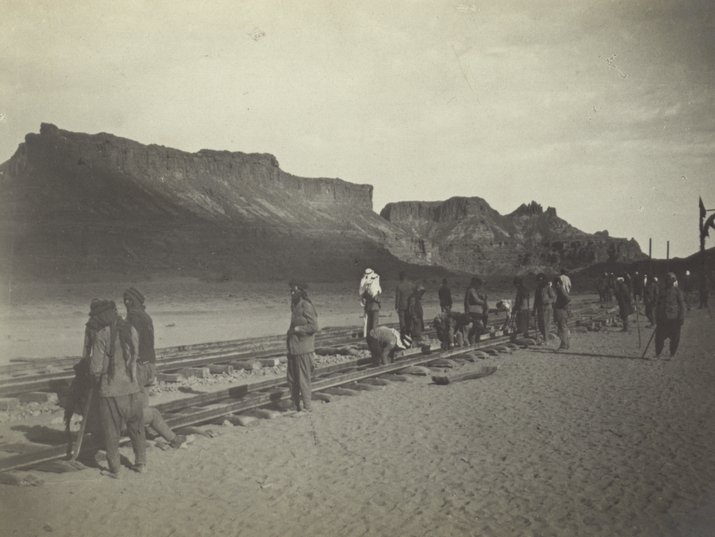 Construction on the Hejaz Railway, 1907. Photo: Karl Lorenz Auler; from the  Pritzker Family National Photography Collection at the National Library of Israel

One black and white photograph shows train cars crossing a low, arched brick bridge in the midst of a desert, passing from nowhere to nowhere between sand and sky. In another, a line of workmen stand next to just-laid tracks. A third picture has been taken from inside the moving train, its shadow falling on the ground. Rails curve into the distance under the hulking presence of a massive desert rock.

These enigmatic photos are part of a one-of-a-kind album housed in the archives of the National Library of Israel. The album includes sixty-eight photographs taken in 1907 by Karl Lorenz Auler, with accompanying handwritten captions, of the famed Hejaz Railway. Stretching between Damascus and the Hejaz region of the Arabian Peninsula, the site of the holy cities of Mecca and Medina, and with a branch line to Haifa, the railway was built by the Ottoman Empire between 1900 and 1908 to connect these far-flung regions of its realm. Auler’s photos are important evidence of the construction in progress.

But what was Auler, a decorated Prussian military general, doing inspecting the Hejaz Railway for the Ottoman sultan? And how did the album end up here at the National Library?

The annual pilgrimage to Mecca, known as the hajj, is one of the most important rituals in Islam, a transformative and transcendental spiritual journey that every able-bodied and financially sound Muslim is obligated to perform at least once during his or her life. When the Prophet Muhammad made his first and only hajj in 630 CE, a few years before his death, he traveled by caravan and on foot across the desert from the first Islamic capital in the city of Medina, just over 400 kilometers away. But as the Islamic empire rapidly expanded over the next century, such journeys became longer and more dangerous. Disease and exhaustion were commonplace and bandits would regularly attack as pilgrims made their way through the desert.

In order to minimize these dangers, during the Middle Ages most pilgrims joined organized camel caravans that traveled on set routes. The caravans from the southern Iraqi city of Kufa, from Cairo, and from Damascus were the most important of these. The introduction of the steamship in the mid-nineteenth century eased the rigors of the journey, especially for pilgrims traveling from India, then under British colonial rule, and points east. However, this greater mobility directly contributed to the rise of a global pandemic. Cholera, native to India, was carried to Mecca by a hajj pilgrim in 1863, and from there spread worldwide. In alarm, European colonial powers imposed strict quarantine regimes on those arriving in and, especially, leaving Mecca.

Bypassing these quarantines, and confronting European colonialism more generally, was a major impetus behind the construction of the Hejaz Railway. In the decades leading up to Emperor Abdulhamid II’s announcement, on May 1, 1900, of his intention to build the line, the Ottomans had lost almost all of their formerly extensive territories in southern Europe. French, British, and Russian interests were vying to break up the empire further, and to expand their rule into its heartland in the Middle East. At the same time, the Ottoman State was deeply indebted to European financiers, and had to rely on European creditors to fund their infrastructure and modernization efforts, including the construction of other railways to connect the vast empire.

On all these counts, the Hejaz Railway was to be different. While the line had little economic benefit—indeed, it only functioned regularly during the hajj season—it had numerous political and religious goals. The project was financed entirely by Muslims, and donations for the “sacred line” were collected around the world. This widely-publicized fact, as well as the construction itself, burnished Abdulhamid II’s power and his pan-Islamic image as the sole independent Muslim ruler confronting European interests. In addition to easing the rigors of the hajj itself, the line would also ensure that the Ottoman military could swiftly deploy troops and supplies to protect shipping in the Red Sea and to defend against colonial expansion and moves towards autonomy by local leaders, especially in Mecca.

While the railway was designed to showcase Ottoman leadership, German engineers and advisors were crucially involved in the railway’s planning and construction. This role built on a decades-long relationship of military and economic cooperation; for a host of reasons, Abdulhamid saw Germany as the empire’s preferred European partner.

It was in this context that Karl Auler became connected to the project. Auler, born in 1854, was a Prussian infantry general who, like many other officers, served as a military adviser to the Ottomans between 1901 and 1908. Appointed to the rank of major general by Abdulhamid, “Auler Pascha,” as he was known, was sent in 1904 to survey the progress on the railroad, and to study local geography and ethnography. Auler focused on two stretches of the line: between Damascus and Ma’an in southern Jordan, including the branch line to Haifa, and from Ma’an to Al-‘Ula in Arabia, 300 kilometers north of Medina. Auler’s reports, which remain among the most important sources on the Hejaz Railway, discuss the topography of the route; the local flora and fauna, including the termites who would eat away at the track’s wooden sleepers; the challenges in providing sufficient water and fuel; and the (possibly stereotyped) reaction of locals to the railway’s construction (in Peter Christiansen’s translation):

“The vividness with which they expressed their joy will remain unforgettable to me. As the men incessantly repeated a salutation in unanimous chorus, ‘May God give victory to our Sultan!’ there was an accompaniment of rhythmic clapping of hands while the women, with their characteristic high trills, produced strong pigeon-like cooing sounds in the highest treble.”

Auler’s reports, published in 1906 and 1908 in the influential journal Petermanns Geographische Mitteilungen, were illustrated with photographs that he himself took along the route. The album in the National Library collection, it seems, contains prints from a later, 1907 journey which, for whatever reason, he deemed unsuitable for publication. While the subjects of the two sets of photos largely overlap, the album includes more portraits—of local Bedouin, workers, officials, and others—providing fascinating glimpses of individuals and daily life.

How did the photographs get to the National Library of Israel? While we do not know what Auler did with the photographs after returning to Germany in 1908—he served in the First World War and then retired to the city of Ulm—somehow they made their way to Gotthold Weil (1882-1960), a noted German-Jewish scholar of Islam, especially Turkish and Arabic, and a former director of the National Library of Israel. Weil taught in Berlin and Frankfurt before immigrating to Palestine in 1934, and though Auler does not seem to be mentioned in Weil’s personal archive, now housed at the library, the two German Turkophiles would have had much in common. The one-of-a-kind album may even have been given by Auler to Weil as a personal gift. He donated it to the library’s collection in 1936.

You can view the rest of the photographs from this historic photo album, here.