Abraham the Pilgrim: An Islamic Perspective

A look at the figure of Abraham the Patriarch in the Islamic tradition, with the help of manuscripts from the National Library of Israel's Islam and Middle East Collection 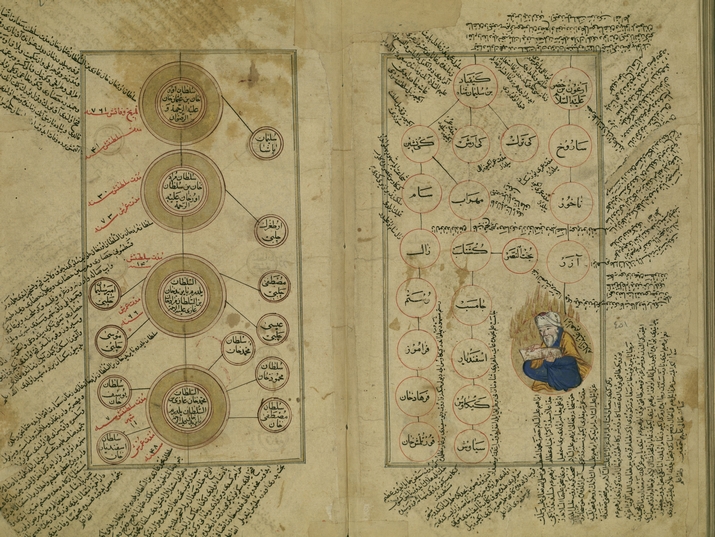 A prophetic and heroic genealogy including an illustration of Abraham, from a Turkish translation of the 13th century cosmological text, the "ʿAcāʾib ül-maḫlūḳāt ü ġarāʾib ül-mevcūdāt", the National Library of Israel collections

Everyone thinks they know the story of Abraham, the biblical patriarch. The first monotheist, he left his father’s house and followed God’s command to go to the Promised Land. His wife Sarah was barren and he had a child, Ishmael, with his handmaiden Hagar; Sarah later forced the mother and son into exile. God revealed to him that he would be the forefather to a great nation, and Sarah gave birth to Isaac. God then asked the father to sacrifice his son, a ritual killing only narrowly averted by last-minute angelic intervention.

For Jewish and Christian readers of the book of Genesis—and later commentaries on those stories—Abraham is one of the best-known biblical figures. However, Abraham and his stories also have another life. In the Quran, where he is mentioned in some 245 verses, and the vast commentary literature on the pre-Islamic prophets, known as “stories of the prophets” (qissas al-anbiya), Abraham plays a central role as founding monotheist, forefather, and forerunner to the Prophet Muhammad.

The Quran calls Abraham khalil Allah, the friend of God (and the source of the Arabic name al-Khalil for the city of Hebron) and hanif, a term that distinguishes Abraham from the idol-worshipping polytheism into which he was born; Muhammad is called by the same term. Like the Bible, the Quran also relates the accounts of Abraham’s setting out for a new land, his covenant with God, the announcement of the birth of Isaac in his old age, and his attempted sacrifice of his son—though in the Quranic story it is unclear which son is the sacrifice, and later commentators disagree whether the story refers to Isaac or to Ishmael.

But there is a twist: the Quran also includes tales that do not appear in the biblical tradition at all. Many of those stories are woven into one of the most important Islamic rituals: the annual pilgrimage to Mecca, known as the hajj.

Every year, the hajj brings millions of Muslims from across the globe to the sacred sites in Mecca, the city of the Prophet Muhammad’s birth where he received his first revelations. The order of the rituals – known as manasik and celebrated during the pilgrimage – was fixed by the prophet himself. When believers today circle the Ka‘ba, the “House of God” that is the holiest site in Islam and which Muslims face in their prayers, they are following the example of the prophet when he took part in his first and only hajj in 630 CE, just before his death.

But they are also following in the footsteps of Abraham. While stories about Abraham’s role in the hajj actually predate Islam, and were part of the pilgrimage to the Ka‘ba, an ancient site of worship, long before the Prophet Muhammad, the Quranic revelation canonized those tales as part of the new religion.

The Quran tells us that Abraham and Ishmael built the Ka‘ba and purified it. As Quran 2:125 states:

And [remember] when We made the House a place of visitation for mankind, and a sanctuary. “Take the station of Abraham as a place of prayer.” And We made a covenant with Abraham and Ishmael, “Purify My House for those who circumambulate, those who make retreat, and those who bow and prostrate.

The station or place of Abraham (maqam Ibrahim) mentioned in the verse is located inside the Grand Mosque in Mecca near the Ka‘ba. The spot, where pilgrims pray as one of the hajj rituals, is marked with a stone that tradition states bears Abraham’s footprint. Commentators have relayed a number of versions of how Abraham’s footprint became embedded in the stone: that he stood on the stone when building the upper walls of the Ka‘ba, or that he stood there when calling on all humanity to perform the pilgrimage, or that Abraham himself prayed on the stone. Some commentators, like the historian of Mecca Al-Azraqi (d. 834), say that Abraham and Ishmael did not just build the Ka‘ba but performed all the hajj rituals, just as they are done today.

The story of Hagar and Ishmael, one of the most plaintive in the Bible, is closely connected to the hajj as well. According to the eminent medieval historian al-Tabari (839-923), after Sarah forced out Hagar and Ishmael, the angel Gabriel directed Abraham to lead them to the future site of the Ka‘ba, which was then a barren hill of clay.

After Abraham left the mother and infant son behind, Ishmael became thirsty, but there was no water to be found. Desperate, Hagar thought she heard the sound of running water on the nearby hill of Safa, but found nothing; she thought she heard a sound on the hill of Marwa, too, but found nothing. After running back and forth between the hills, located just a few hundred meters from the Ka‘ba, she came back to Ishmael and found him sitting in water that had miraculously burst forth from an underground spring.

This story, told in other versions as well, is meant to explain the hajj rituals of sa‘y, “running” back and forth seven times between the two hills—a ritual now conducted in a covered corridor with designated lanes for forward and back—and drinking the waters of the Zamzam spring.

Rooting the hajj rituals in the life of Abraham connects Muslims—historically and today—in an unbroken chain to the purest, most authentic, and ancient monotheistic traditions. That is part of the reason why the experience of the hajj is so powerful for those who take part in it. Muslim children around the world grow up with these stories, “internalizing their geography as a personal landscape whose contours and history define who they are,” as contemporary thinker Ziauddin Sardar has written (Mecca: The Sacred City, London: Bloomsbury, 2014). During the hajj the geography of those narratives transcendently comes to life.

The Ka‘ba of the Heart: The Hajj in Islamic Mysticism