The Ka‘ba of the Heart: The Hajj in Islamic Mysticism

Rumi, Ibn Arabi, and the radical Sufi conception of religion 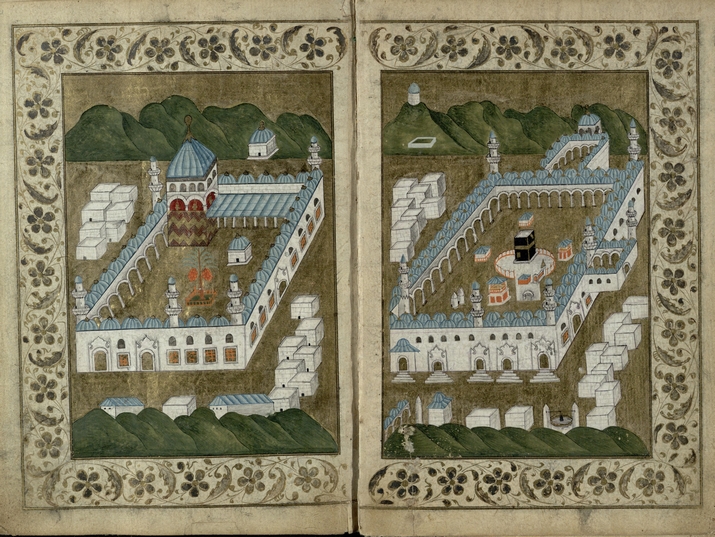 An illustration of the Prophet's Mosque in Medina (left) and the Holy Mosque in Mecca (right). From an 18th century Ottoman Turkish manuscript of the Sufi prayerbook Dalāʾil al-khayrāt, the National Library of Israel collections

Sometime in the mid-ninth century CE, a Sufi initiate named Bayazid set off by foot from his home in north-central Iran toward Mecca, aiming to complete the hajj pilgrimage to the holy city—a journey of almost 2,500 kilometers. In every town and village through which he passed along the way, he sought out local mystics and saints, hoping to find his own true master. Finally, in an unnamed town, Bayazid encountered a poor, blind Sufi hunched with age. The sage asked him of his plans, and Bayazid told him he aimed to complete the hajj.

“Just walk around me seven times instead; that’s better than the hajj,” the old sheikh replied,

Complete your hajj thus! Reach your journey’s end! You’ve run to Safa, entered purity; you’ve done the Umrah; live eternally! He judges me much loftier, I swear, than that mere house of His. Let us compare: That Ka‘ba is the home of piety, but I contain His deepest mystery; inside the Ka‘ba no one’s ever stepped and my pure heart none but God will accept; when you have seen me, you have seen God too; You’ll circle then the Ka‘ba that’s most true.

This story, taken from Jalal al-Din Rumi’s mystical epic the Masnavi-ye Man’ai (meaning the “spiritual couplets,” in Jawid Mojaddedi’s award-winning English translation) seems at first confounding. Rather than complete the pilgrimage to Mecca, a ritual duty every able-bodied and financially sound Muslim is expected to perform at least once, the mysterious sheikh tells Bayazid to abandon his journey. Instead of tawaf, the circumambulation of the Ka‘ba that is a central feature of the pilgrimage, the saint says to circle him; instead of running (sa‘y) between the two hills of Safa and Marwah, likewise an ancient part of the hajj (as well as any pilgrimage, called an umrah, performed outside the month of Dhu al-Hijja) the saint says he has already completed his task.

For Muslims throughout history until today, the journey to Mecca has been a lifelong goal, the height of spiritual fulfillment, and the holy city’s transcendental geography a constant source for contemplation. Is the sheikh—and, by extension, Rumi—advocating blasphemy?

Part of the answer lies in the fact that the Bayazid around whom Rumi weaves this fiction—just one of the thousands of stories that make up the Masnavi, whose importance in Islam is testified to by its sobriquet, “the Quran in Persian”—is none other than Bayazid Bestami (d. 874) one of the most important figures of early Sufism. While little is known of Bayazid’s life, in part because he was a recluse who left no written work behind, his bold, ecstatic sayings have been preserved. His fame rests on those sayings, which can strike readers today, who may have preconceived notions of Islam as conservative, strict, and legalistic, as surprising as the old sheikh’s instructions in Rumi’s story. Among others, Bayazid is reported to have said “Glory be to Me! How great is My majesty!” and to have otherwise compared himself to God, to declare that the Ka‘ba circumambulates him, and to have replied to the muezzin’s call to prayer of “God is great!” with the answer “I am greater!”

Bayazid’s statements are not a sign of madness or nihilistic atheism. Instead, Bayazid sought to express the experience of the individual consciousness becoming truly obliterated in the divine. The fact that Bayazid upends even the centrality of the Ka‘ba, the House of God that descended from heaven and toward which Muslims turn during prayer, makes his statement all the more powerful. Rather than transgressing Islam, Bayazid, and Rumi after him, is imagining an alternative spiritual interpretation of the religion, based on the transcendent and transformative knowledge of the unseen: that is, “the roots of the sources of the principles of the religion,” as Rumi described his Masnavi in the introduction to the work. It was not always the case, however, that such statements did not come with repercussions; Mansour Hallaj (d. 922) was executed, some scholars believe, for making just such statements.

The hajj, as well as Bayazid, plays a similarly prominent role in another central work of Islamic mysticism. Ibn Arabi (1165-1240), known as al-shaykh al-akbar, the greatest master, was born in Murcia in Muslim Al-Anadalus (modern-day Spain). A Sufi saint and prolific writer, he embarked on the hajj in 1201 and remained in Mecca for three years. While there, he began his most famous work, the Futuhat al-Makkiya (Meccan revelations). The thirty-seven volumes of the complex and deeply-layered book contain numerous ecstatic visions; in one, from chapter seventy-two, the Ka‘ba “raises its skirts” and rises up from its foundations, threatening Ibn Arabi and attempting to block his circumambulation. Just as the Ka‘ba, imagined as a young girl and addressed as “she,” is ready to jump, Ibn Arabi utters a poem of praise and the structure returns to its normal, fixed state. In thankfulness and humility at his deliverance, Ibn Arabi then composes eight love letters to the Ka‘ba, collected in the Taj al-Rasa’il wa-Minhaj al-Wasa’il (The Crown of Epistles and the Path to Intercessions).

When God created your body, He placed within it a Ka‘ba, which is your heart. He made this temple of the heart the noblest of houses in the person of faith. He informed us that the heavens… and the earth, in which there is the Ka‘ba, do not encompass Him and are too confined for Him, but He is encompassed by this heart in the constitution of the believing human. What is meant here by “encompassing” is knowledge of God (Futuhat ch. 355).

Nevertheless, the physical Ka‘ba demands respect—as Ibn Arabi terrifyingly learned—precisely because coming face-to-face with the Ka‘ba is coming face-to-face with the self: the most clarified self that is a locus for the manifestation of the divine. The rituals of the hajj are a tool for achieving this revelation and the geography of the sacred city is a map pointing towards it.

It is no wonder then that Muslims throughout the ages have made and used images of Mecca as a means of spiritual inspiration. The NLI collection contains numerous manuscript copies of a fifteenth century collection of blessings for the Prophet Muhammad known as the Dala’il al-khayrat wa-shawariq al-anwar fi dhikr salat ‘ala nabi al-mukhtar (“The Signs of Benefits and the Brilliant Bursts of Light in the Recitation of Prayers on the Chosen Prophet”). Composed by the Sufi mystic Muhammad b. Sulayman al-Jazuli (d. 1465), it was one of the most popular Muslim prayer manuals, with copies originating from Indonesia to Morocco. Many manuscripts of the text contain two illustrations: one of Mecca, including the Ka‘ba and other sacred sites, and the other of Medina, the location of the Prophet’s mosque. The images, from different times and places and composed in different styles, reflect the chronological and cultural diversity of the Muslim world. However, at the same time they speak to a shared and unifying desire: to approach the Ka‘ba in order to transcend the Ka‘ba and thereby to find one’s true self.