Jewish Solidarity Across the Seas

​In the late 1870s an emissary traveled across the United States, from sea to shiny sea, from one Jewish community to another, to collect charity fellow Jews in the Land of Israel 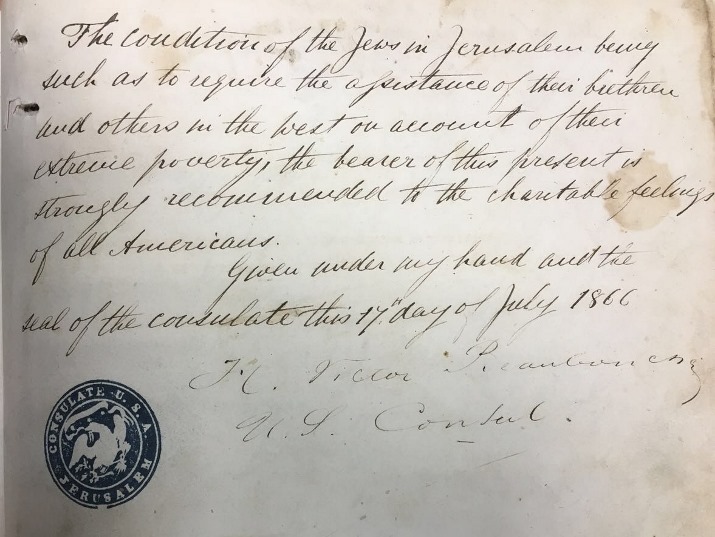 ​In 1876 Nathan Natkin of Jerusalem was made a Shaliakh DeRabanan, an emissary for the Rabbis. He was the first Shaliakh to represent all the communities residing in the Land of Israel at the time, an amazing feat in and of itself. To be an ambassador of Jewish unity from the Holy Land to the Jewish Diaspora would have been a heavy task to bear, and a high honor, no doubt.

Natkin was given a mission by the communities he was representing. In order to complete his mission he was given a well-used and entirely communal notebook, handed to him by the previous Shelichim which show case the collections of charity from the 1840s up until the late 1870s. Natkin took over the notebook sometime during that period.

The notebook itself  is chock full of lists and affirmations given by boards of trustees from the various communities visited in the United States from the east coast (Boston, Albany) all the way to the west coast (Los Angeles). Lists that had been signed with wax seals by the boards of trustees to prove that nothing in the books had in fact been cooked.

Natkin was in charge of making sure that both the traveling and the money collecting was legitimate and approved. This was doubly important when the objectives of the charity funds were not just for the Old Yishuv in general, but for specific goals, such as buying the land adjacent to the tomb of Simeon the Just.

The notebook is kept in the National Library’s Rare Book collection, its delicate pages keeping the record of this precious history.

This post was written with the generous help of Dr. Yoel Finkelman, curator of the Haim and Hanna Judaica Collection at the National Library of Israel.