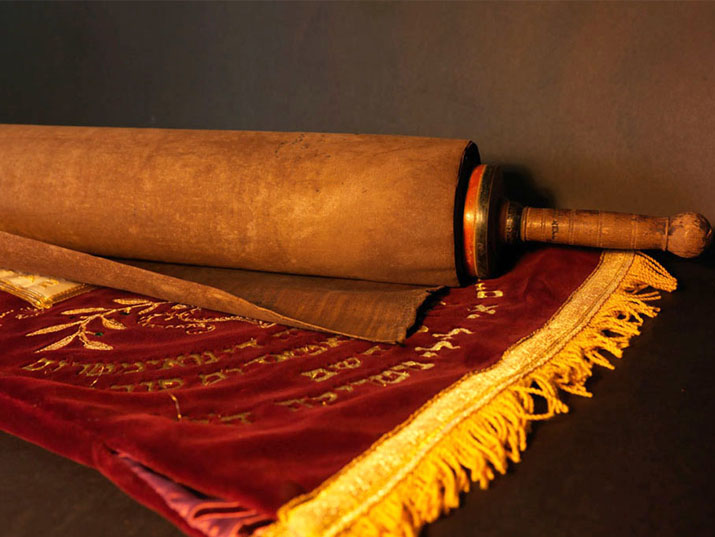 The Torah scroll pictured above was originally inscribed in Spain in either the 14th or 15th century, but that was just the beginning…

At some point, it arrived at the famous Kahal Shalom synagogue on the island of Rhodes, which is today the oldest active synagogue in Greece. It was likely brought there by Jewish exiles from Spain or their descendants and may very well have been stored in the synagogue since its founding in 1593.

The first evidence of a Sephardic-Jewish presence on Rhodes dates to the Ottoman period, which began with the conquest of the island in 1522.

For hundreds of years, the members of Rhodes’ Jewish community would read from this scroll at services held at Kahal Shalom. The community thrived and by the 1920s, a quarter of the town of Rhodes’ population was Jewish.  It all came to an end with the Nazi conquest and the deportation of the island’s Jews to Auschwitz in July of 1944.

Just a few days before the deportation, members of the community were able to smuggle the scroll out of the synagogue and place it in the custody of the Mufti of Rhodes, Sheikh Suleyman Kasiloglou. The mufti is said to have hidden the Torah under the pulpit of the Murad Reis Mosque, where the Nazis would never think to look.

1,673 Jews were sent from Rhodes to Auschwitz where they were put to death. Selahattin Ülkümen, the Turkish Consul-General on the island, was able to save around 50 members of the community by stating that they were Turkish citizens. This was only true for a dozen or so. Regarding the rest, Ülkümen fabricated a lie claiming that spouses of Turkish citizens were citizens themselves. His heroic intervention saved their lives.

Following the conclusion of World War II, the Torah scroll was returned to the community’s few surviving members, in the presence of soldiers from the British Army’s Jewish Brigade.

In June of 1999, the scroll was deposited at the National Library of Israel by Jacqueline Benatar and her sister Miriam Pimienta-Benatar, to serve as a memorial to the martyrs of Rhodes, their parents among them. The donation was carried out at the suggestion of the President of the Rhodes Jewish community, Mr. Moise Soriano.

You can find the Rhodes Torah scroll today at the National Library of Israel.