A Look at Jewish Artisans and Crafts in Morocco

The story behind the professions of Moroccan Jews, including a look at some unique photographs documenting Jewish artisans in Morocco in 1953 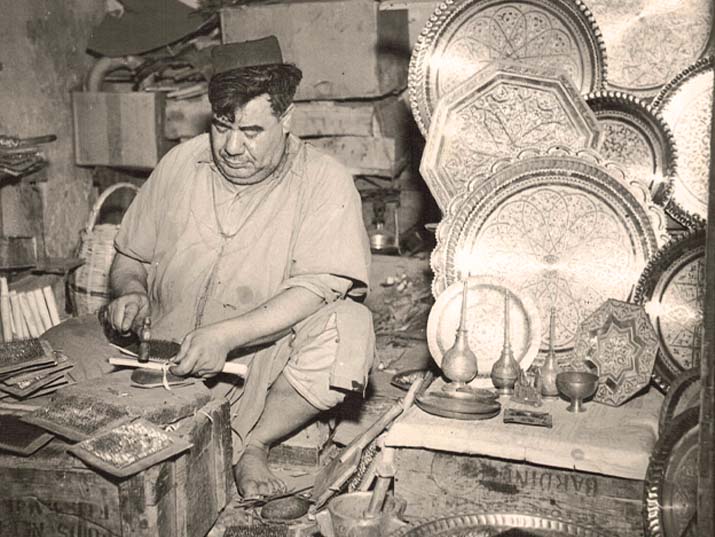 Brass engraver in Morocco. All the photographs in this article are from the Central Archives for the History of the Jewish People

What professional crafts did the Jews of Morocco practice? Perhaps you were expecting a clear-cut answer, but we found the issue to be rather complex and dynamic. And, for this very reason, we shall now proceed to share the whole story with our faithful readers (as we like to do), as well as some unique photographs that shed some extra light on the subject. These images have a story of their own, but more on that later.

For centuries, Jews in Morocco made a living from crafts that the Muslim majority society engaged in as well. The terms of the Pact of Umar as well as the laws of Sharia did not impose severe restrictions on non-Muslim occupations, though only Muslims were allowed to work in the fields of government and public office. This was intended to prevent a situation where non-Muslims would hold more important government positions and have greater economic power and influence than Muslims. In other words, despite the fairly common claim among Israelis of Moroccan descent, it’s statistically impossible that everyone’s Jewish-Moroccan grandfather served an adviser to the king.

Despite the tolerant legal infrastructure, the Muslim majority population did eventually impose restrictions on non-Muslims through the guild system as a way to lessen competition in the craft professions. Not having much choice, the Jews flocked to the trades that were open to them.

According to Sharia law, Muslims are forbidden from working with silver and gold, as the labor results in a greater profit than the true value of the metals, making the profession immoral. The exclusion of Muslims from metalwork enabled Jews to integrate into the industries of goldsmithing and production of gold thread.

Being a professional craftsperson was considered a respected occupation among the middle and lower classes. Prof. Eli Bashan, who researched this subject, wrote – “Even sages and rabbis, who did not want to be paid for their Torah teachings, worked as professional artisans, and this was considered a virtuous act; These included mainly goldsmiths but also other skilled workers such as builders and barbers. Those who were chosen for communal leadership roles came from the ranks of the artisans.”

While most of the professional artisans concentrated on a single area of expertise, we found a number of photographs showing Moroccan Jewish women working in two professions. In the image below, the women of the Casablanca Jewish community (apparently) are shown working as both seamstresses and childcare providers. This was decades before 2020, when working from home became an unexpected reality of life.

The field of commerce was also open to Jews in Morocco and ranged from local to regional to international trade. The Jewish elite class consisted mainly of rich merchants who lived in major port cities – key players in the trade between Morocco and the West.

All this began to change in 1912 with the establishment of the French Protectorate in most parts of Morocco and the Spanish Protectorate in a small area in the north of the country. While the French occupation brought with it the winds of change and progress, this did not necessarily improve conditions for the Jews. It had nothing to do with persecution or discrimination, quite the opposite. The liberal economic policies pursued by France threatened the source of livelihood for many local artisans in the colonial period, at a time when most Jews practiced minor crafts such as leatherworking, goldsmithing, food preparation and various services.

Local consumers were now able to buy significantly cheaper imported goods, reducing the need for local artisans. Some of the country’s traditional professions actually collapsed due to the tough competition from abroad. Others only managed to survive because they sold their goods and services mainly to the Arab population, and not to Europeans who flooded Morocco following the occupation. One can assume that this is the reason why, from the colonial period, the proportion of Jewish merchants rose to 50 percent of Moroccan Jews, while that of artisans dropped to 38 percent.

Historians of the period have grappled with the question of which artisans managed to maintain their source of livelihood despite the fierce competition from the West. The fate of one particularly dominant area is quite clear: when the Jews left Morocco following the establishment of the State of Israel, the local goldsmithing industry practically disappeared, and Moroccan immigrants and Morocco’s Arab population repeatedly claimed this to be the case.  Even today, visitors to Morocco say that local goldsmithing has been unable to recoup its former success from when the Jews worked in the field, despite various attempts at its revival.

A great way to learn about the crafts of Moroccan Jews is to explore photographs from the period. One of the most important collections in the Central Archives for the History of the Jewish People (at the National Library of Israel) is the JCA Archive (Jewish Colonization Association), founded by Baron Maurice de Hirsch. The JCA was established in the late 19th century in order to help solve the plight of the Jews of Eastern Europe, with most of its efforts centered on re-settlement in Argentina. However, during the 20th century, the organization became a philanthropic foundation supporting various projects throughout the Jewish world. Among other activities, in the early 1950s, the organization supported Jewish artisans and farmers in Morocco. Many photographs documenting artisans are preserved in its collections. The photographs in this article show Jewish artisans from 1953, probably from Casablanca, engaged in traditional crafts such as copper engraving, shoemaking, sewing and leatherworking.

Shai Srougo, “The Artisan Dynamics in the Age of Colonialism: The Social History of Moroccan Jewish Goldsmiths in the Inter War Period”. European Review of History. 21 (5) (2014): 671-690.