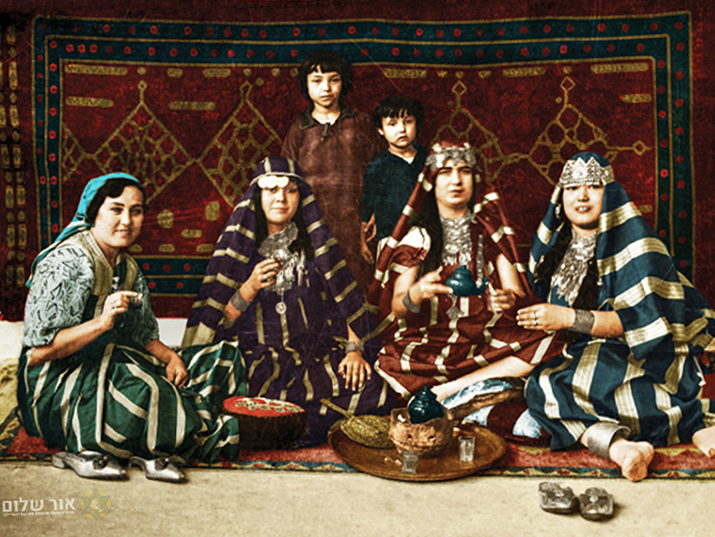 For more than a decade, Eid al-Banat—Girls’ Day, also known as Rosh Hodesh L’Banot—has been observed across Israel, in a variety of settings and usually in large gatherings. The holiday is celebrated on the seventh night of Hanukkah, which falls on the eve of the first of the Hebrew month of Tevet. For this reason, the festival is customarily linked to the crowning of Queen Esther which, according to tradition, took place on the first of Tevet. But Girls’ Day is actually associated with not one, but several different Jewish heroines, including Esther, Judith and Hannah, who each saved their people from danger. (Queen Esther, who saved the Jews of Persia; Judith, who slew Holofernes, Nebuchadnezzar’s general; and Hannah, daughter of Mattathias, who encouraged her brothers to rebel against the Greeks, sparking the Maccabean Revolt.) 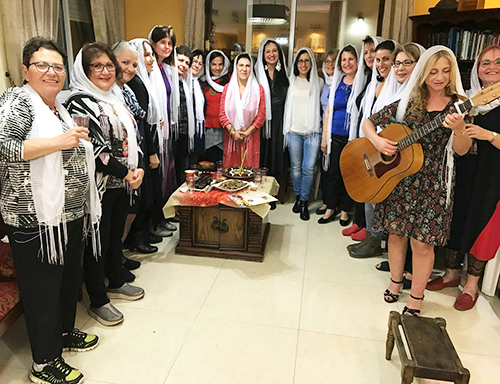 Although the holiday’s origins are commonly (and perhaps retroactively) attributed to the Bible and the Jewish Apocrypha, the modern observance of Girls’ Day was preserved in the communities of North Africa and the Middle East: Tunisia and Libya, Djerba and Morocco, Algeria and Turkey and Salonika (Thessaloniki). The number of communities that celebrate the festival attests to the rich and varied traditions that surround its observance. At first, the holiday’s traditions were something of a secret, shared only by women of the observant communities, but soon enough the celebrations caught on and women and their families began marking the occasion openly and publicly.

Writer and storyteller Esther Dagan Kaniel shared with us her childhood memories of Girls’ Day celebrations in Tunisia, which she remembers by its French name— la fête des filles:

According to lore, the exiled priests from the First and Second Temples came to the island of Djerba, bringing their ancient traditions with them, among them the celebration of Eid al-Banat. This is what is beautiful about Tunisian Jewry’s traditions; traditions like the Girls’ Day rituals didn’t develop in the Diaspora, but date back to the time of the Temple.

On Girls’ Day, mother would recount the heroism of Judith, who saved the people of Israel, and Yael and Queen Esther, who was crowned queen on this day. It was no different from other holidays, for mother associated each holiday with a different character. For example, she said that the person who fasted on the Fast of Esther was able to “taste” some of what Esther experienced.

When I long for Tunisia, I long for the Land of Israel. For me, it is the longing for our synagogue, for our community. When I came to Israel, I wanted to be a sabra. At some point, I realized that I had an advantage—the two worlds live within me in perfect harmony.

In an article by scholar Yael Levine, we learn of how each North African Jewish community celebrated female empowerment: in Tunisia, Jewish girls would exchange gifts and food and refrain from work on this day. In Libya, the young girls would visit each other and throw a joyous party. On the island of Djerba in Tunisia, unmarried women also celebrated the holiday, which was thought to bring good luck for a successful match. In addition, a special celebration was held for couples engaged to be married: In the afternoon, the bride-to-be’s family would bring the groom’s family a tray of sweets, and in the evening, the groom would reciprocate by bringing gifts such as perfume and jewelry to his bride’s home. Later, his relatives would join and the two families would conclude the evening with a shared festive meal. It was also customary in Tunisia to celebrate joint bat mitzvah parties on Girls’ Day. Some would even feast on meals of milk and dairy products, presumably to commemorate the heroism of the biblical heroine Yael, who slew the Canaanite general Sisra after sedating him with milk.

Storyteller Shoshana Krebsy told us about the holiday’s significance in Morocco. According to her, Girls’ Day celebrations on the first of Tevet were less common in Moroccan communities for the simple reason that a similar celebration was held on the first day of each and every month of the Hebrew calendar. According to Shoshana: “In patriarchal societies and families, women needed to be able to express their feelings, and female circles formed as support groups for women, and especially for young brides. Thinking about this ceremony, it’s really a kind of contract among women—a sisterhood.”

On the first of the new month, the women would to meet in the hamam (bath-house). There, they would ask forgiveness in unconventional ways:

Either the midwife or the healer would lead a ceremony in which two friends who have quarreled must recreate the argument right there in the hamam. Then the arbitrator, the same midwife or healer, decides who of the two needs to apologize. The reason for the ceremony is that the beginning of a new month is considered a kind of “little Yom Kippur”, on which Moroccan women celebrate their own holiday and create support groups. Women would plan the monthly agenda and assign tasks—who is responsible each day for helping the new mothers who have given birth, who brings refreshments, and who visits the families in mourning, among other things.  The forgiveness ceremony is meant to resolve tensions so that the community of women can help each other.

The holiday is bigger than you think: on the first of every month, the ladies would meet at the home of the wise woman where they would learn the secret of a special dish, such as couscous made from medicinal plants and beef bone marrow. Part of the ceremony was the initiation of young brides. The ceremony included songs of desire—bawdy, salacious compositions dedicated to love and sexuality. Whoever didn’t share her troubles wasn’t invited to the next gathering…

The descriptions above indicate that Girls’ Day is a celebration of mutual support and peacemaking. The historical record corroborates this: songs documented in the Thessaloniki community preserved to this day also share the theme of celebrating peace and reconciliation. The girls would sing in Ladino: “Peace, peace, on the life of [= I swear on] the Father’s locks [the Christian-Orthodox priest who refrains from cutting his hair], may we not quarrel until [next]Hanukkah!”

Thanks to Yael Baruch, Heli Tabibi Barkat, Yael Levine, Esther Kaniel Dagan and Shoshana Krebsi for their help in preparing  this article.