He starred in the first Hollywood feature filmed in Israel, but the legendary actor's connection to the Jewish state and people certainly didn't start or stop there... 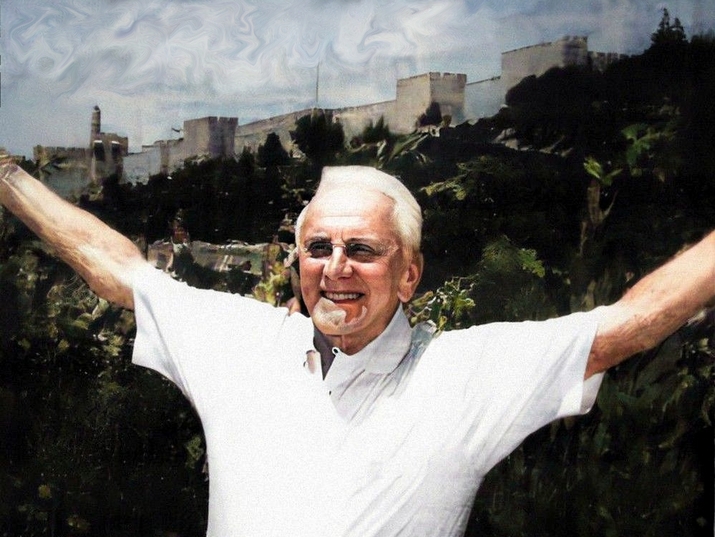 Kirk Douglas in Jerusalem, 1999 (Stylized photo based on one published in the ⁨⁨February 1, 2002 edition of The Australian Jewish News⁩⁩; part of the National Library of Israel Digital Collection)

Like many Jews of his generation, Kirk Douglas had changed his name to avoid revealing that he was born Issur Danielovitch, the son of poor Jewish immigrants who lived in Amsterdam, New York.  Even before that, he adopted the Americanized surname of his uncle Avram Demsky and preferred Isadore over Issur.

Douglas always was acutely aware that he was Jewish. His childhood temple offered to subsidize his education at a Yeshiva so he could become a rabbi, but he had fallen in love with acting and declined the offer.  Though he had a bar mitzvah and celebrated Jewish holidays in his home, he did not share the piety of his parents.  The anti-Semitism he encountered in his hometown, however, never let him forget his Jewish origins.  As he recalled in his autobiography, The Ragman’s Son:

“After school each day, I’d have to walk about twelve blocks to Hebrew school.  I had to run the gauntlet, because every other street had a gang, and they would always be waiting to catch the Jew boy.”

He could not escape this prejudice when he attended St. Lawrence University, a Liberal Arts college located in an isolated rural area of northern New York. Though athletic and handsome, he was not rushed by the fraternities whose national charters banned pledging Jews. Instead, Douglas left his imprint on the campus as an actor, champion wrestler, and the first non-fraternity member and Jew to be elected student president in 1938.  The alumni protested over a “Jew boy president of the student body” and threatened to stop donating to the school.

Douglas served in the navy during World War Two.  He married his first of two gentile wives in 1943 (the second converted when they renewed their vows in 2004) in a ceremony conducted by a navy chaplain.  A rabbi agreed to officiate at a subsequent wedding in return for the couple promising to raise their children as Jews.

Douglas subsequently admitted that he never intended to honor this pledge.

He landed his first leading role opposite Barbara Stanwyck in The Strange Love of Martha Ivers in 1946, though he would not be cast as a Jewish character for another seven years. Privately during this period, his attachment to Judaism expressed itself by fasting on Yom Kippur out of a sense of solidarity towards the Jews of the past and the present.

This connection was reinforced when Douglas played Holocaust survivor Hans Mueller in Edward Dmytryk’s The Juggler, the first Hollywood motion picture to be filmed in Israel.

At the registration center for new immigrants, Hans, a former juggler and clown, hallucinates that his deceased wife and children are peering at him from a window.  Chafing from confinement, he escapes from the facility and beats up an Israeli police officer whose check of his identification papers stirs up memories of Nazi interrogations. Roaming the countryside, Hans is befriended by a boy and woman who belong to a kibbutz and invite him to stay there. 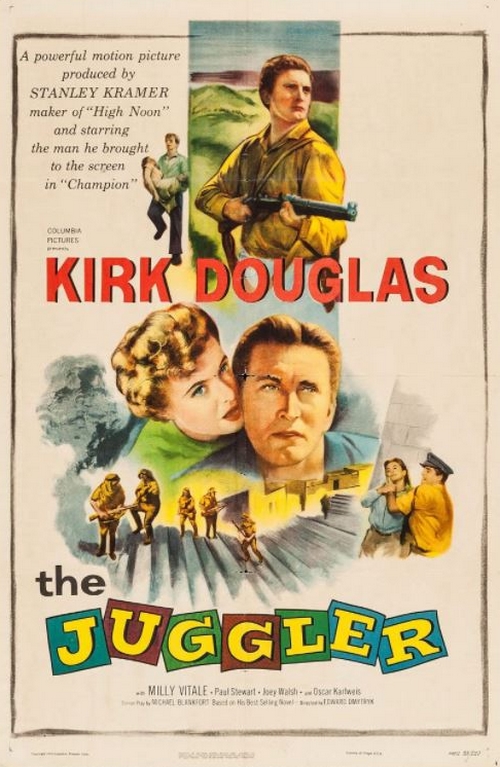 When the police track him down, Hans barricades himself in a room, though he eventually surrenders and acknowledges he is sick and needs help.  Throughout the film Hans repeatedly remarks that “home is a place you lose,” but slowly discerns that Israel is a homeland for Jews fleeing oppression.  In real life, Douglas admired Israel for fighting for Jewish statehood in the shadow of the systematic slaughter of European Jewry.

His next Jewish character, Mickey Marcus, in Melville Shavelson’s Cast a Giant Shadow (1966) was based on an American Jewish soldier recruited by the Haganah as a military advisor to Israeli troops during the War of Independence.

Until he tours Dachau after its liberation, Marcus feels little sympathy for Zionism.  Later, catapulted into the fray in Israel, he trains soldiers and organizes the clandestine route to smuggle arms, food, and medical supplies into besieged Jerusalem. Marcus is eventually killed in a “friendly-fire” incident – an Israeli sentry who does not understand English shoots the American, who does not speak Hebrew and cannot respond to orders to prove he is not an enemy combatant.

Douglas identified with Marcus who “in helping the Israelis, discovered his Jewishness, came to grips with it, and acknowledged that he was a Jew.”

The actor returned to the topics of the Holocaust and Israel in films like Victory at Entebbe (1976) and Remembrance of Love (1982).  As Holocaust survivor Joe Rabin in the latter, he travels to a gathering of survivors in Israel searching for his long-lost lover and the baby she was carrying before the two were deported to concentration camps.  Douglas’ indignation over the Shoah and pride in Israel as a Jewish state are evident in many of the books he authored, as well.

In 1991, Douglas nearly died in a collision between his helicopter and a stunt plane. Confined to a hospital bed with spinal injuries, he reevaluated his relationship to Judaism:

“I came to believe that I was spared because I had never come to grips with what it means to be Jewish.”

This quest spurred him to study Torah and have his second bar mitzvah at the age of 83. He valued the morality promoted by religions in general, “I studied Judaism a lot. I studied religion in general, and I have never imposed my Judaism on my kids.”

Kirk’s son, the actor Michael Douglas, also began to further explore his Jewish roots after the helicopter incident. In subsequent years he became very active in Jewish causes and visited Israel numerous times, including in 2015 to receive the second annual Genesis Prize, known as the “Jewish Nobel”, which “recognizes and celebrates Jewish talent and achievement, honoring individuals for their accomplishments and commitment to Jewish values.”

In 1996, the elder Douglas suffered a severe stroke.  Intensive speech therapy enabled him to regain his ability to talk.  Rather than letting his halting speech deter him from acting, he appeared in three more feature films and one television movie.  In It Runs in the Family (2003), he plays the patriarch of a Jewish family coping with the aftermath of his stroke. In the film, Douglas quips:

“So what if my stroke left me with a speech impediment? Moses had one, and he did all right.”

Over the years, the actor donated over $100 million to American and Israeli charities, funding hundreds of playgrounds in poor sections of Los Angeles and Jerusalem, an Alzheimer’s hospital unit, and a theater near the Western Wall.

Over the course of his career, Kirk Douglas evolved from an actor who originally minimized his Jewish roots into a proud Jew who recovered his ethnic and religious identity by dramatizing it and immersing himself in Judaism and Jewish history.

A version of this article was originally published by the San Diego Jewish World.