On the eve of World War I, a group of Polish yeshiva students signed a pact to make their friendship everlasting... 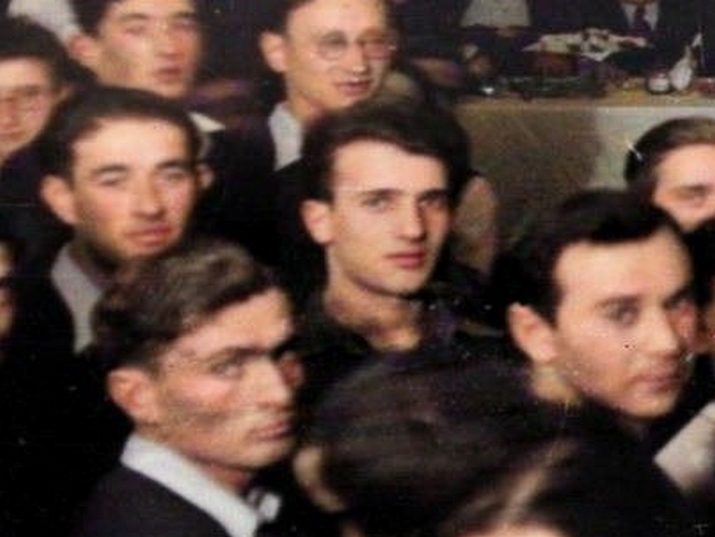 "We open our hearts completely to each other... there are no secrets between us" (Image: Colorized photo of young men in Będzin / The Yad Izhak Ben-Zvi Archive, part of the National Library of Israel Digital Collection)

On February 5, 1914, mere months before the shadow of World War I settled over Europe, six young men gathered to discuss friendship and love. These passionate yeshiva students in Będzin, Poland, aimed to immortalize their friendship by establishing the “Beloved and Gracious” association.

Joining was a lifetime commitment, and according to rule 26, opting out was not an option:

In order to cement their bond and establish their association, the friends composed “The Golden Book of the Association”, a large notebook containing objectives and 31 rules, written in Hebrew and intended to make sure that the association would endure and realize its purpose. The innocence and optimism conveyed within its pages, on the eve of one of the darkest periods in modern history, is striking.

The young men, whose ages ranged from 18-23, saw the darkness waiting for them outside the walls of the study hall, and searched for a way to make the transition to the real world more bearable through love and friendship. They rejected the cynicism and loneliness that they saw around them, and wished to offer an alternative, in which all group members would be vulnerable and mutually committed.

They saw the current reality as one in which:

“Each and every one carries on his shoulders his burden of desires and goes about his way. No one enters the mind of the other […] no one desires to enter his friend’s threshold, to see, to look, and to participate in his joy and sadness.”

The future only seemed to them dimmer:

“We will now paint our foreseeable future […] we are Torah-learning young men, what will our future be […] our lives flow in a simple and predictable path. After getting married, each of us becomes a different person. Life, sometimes sad and usually full of worries, begins to change him […] the years pass […] and all the hopes and dreams that he had hoped and dreamed in his youth […] the wind has carried away, and they are gone.”

According to the association’s founders, when life becomes harder to bear, the adult sadly remember the peaceful days of youth:

“…days in which he was most joyful, in which he was surrounded by a wide world of hopes and dreams… And he then says to himself, this friend who was close to me like a brother, attached like a wick to a candle, is now so far away. Now he does not participate neither in my joy nor in my sorrow […] anyone with a heart will feel his chest tighten and his soul fill with gloom, when he looks back on the days of his youth and remembers his friends […] with whom he had grown up, learned, and dreamed.”

Thus, to prepare for the future and prevent that loneliness and grief, the six friends decided to officially seal their commitment to each other:

“Before we part from each other, before we go out into the world […] now, as the spark of our friendship has not yet burnt out […] now we wish to establish and perfect the “Beloved and Gracious” association […] one association which will bind and connect us for the rest of our lives […] we open our hearts completely to each other […] there are no secrets between us […] this association concerns mostly the future rather than the present. To take part in [each other’s] joy and sorrow, and in all affairs, including finances and advice.”

The rules included commitments to help each other; to be bonded closely just like brothers; to take interest in each other’s situations; to write letters to each other, and at least once every three months to send a letter to the chairman detailing one’s life affairs; to take part in family celebrations; to visit each other as much as possible; to gather when one of the friends requires special assistance; and in conclusion: “to be beloved and gracious to each other with the love of David and Jonathan, independent of all else, for the rest of our days. A true love which rises from the depths of the soul and the breadth of the heart”.

“The Golden Book of the Association” was signed by all six members, with some of them offering a few personal details as well. The members were: Ze’ev Yaakov son of Moshe Watinsky (born 1891), Yeshaya Yona son of Shimon Yehuda Pszenica (born 1896), Chaim Yitzchak son of Alter Shmuel Welner (born 1896), Asher Arye Langfus, Yom Tov Lipa Rotenberg, and Moshe Betzalel Zeidman.

What became of the association and its members?

Did they keep their bonds of love?

We know at least a bit about two of the friends. Yeshaya Yona Pszenica took part in establishing a branch of the Noar Mizrachi religious Zionist youth movement in his town after World War I, and a few years later he took a position as the principal of Yavne, a school in Działoszyce, a town near Będzin.

As a principal, he was described as “very devoted to developing the school. The school was spotlessly clean and organized. The lessons were run punctually, in accordance with the schedule” (Yizkor book of the Jewish community in Dzialoszyce and surroundings, p. 116).

Yeshaya Yona, his wife Chana, and his daughters Esther and Shifra, were all murdered at the Belzec extermination camp.

Chaim Yitzchak Welner met a different fate. He died in old age, in Tel Aviv in 1980. According to the Encyclopedia of Religious Zionism, Welner was also involved in establishing a branch of Noar Mizrachi in Będzin in 1918, and was also chosen for the central committee of the movement in Poland.

In 1925, he moved to the Land of Israel but had difficulty settling in, and decided to move back to Poland. Ten years later he made Aliya again and settled in Tel Aviv. Though he was a learned and knowledgeable Torah scholar, he refused to make his living from being a rabbi, and worked instead as a clerk.

Welner’s two sons became quite prominent figures in Israel: Alter (1923-2020), who was a journalist and one of the founders of the “HaTsofeh” newspaper, and Simcha (1931-2011), who was a nuclear physicist and taught in the department of mathematics at Bar-Ilan University.

“The Golden Book of the Association” was recently acquired by the National Library of Israel in Jerusalem. It provides a glimpse into the group’s touching and optimistic innocence in early 20th century Poland.