Our Exodus from Egypt

“When we left Egypt we could only take one suitcase and twenty Egyptian lira. That was all,” my grandmother said. “It was forbidden to take more than that, and we were very worried how we would manage in a new land without anything.” 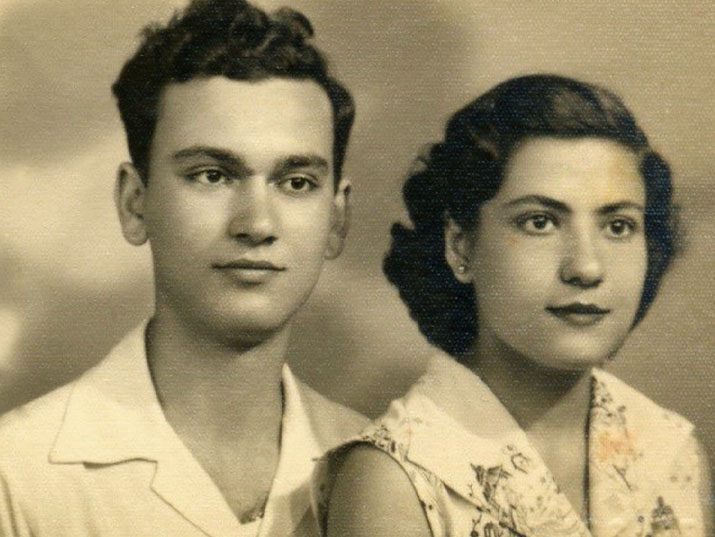 Grandfather Yitzhak and Grandmother Tony, shortly before their exodus from Egypt. Alexandria, 1953.

My grandfather was the first to leave. He had been deported, handcuffed, on a ship sailing for Italy. Both my grandparents were members of a Zionist underground that operated in Egypt. They taught children to speak Hebrew, organized activities that encouraged Zionist thinking among the youth and even wrote a Zionist newsletter, which they distributed among members of the movement.

Until one day, secret lists containing the names of all the members of the underground group fell into the wrong hands, and soon enough they found themselves in an Egyptian prison. Anyone who had foreign citizenship, like my grandfather, was expelled. Others remained behind bars for a long time. But there was one name on the list that the Egyptian police could not find. One member of the underground that remained at large – Tony. Tony was the missing member of the underground. My grandfather said that even when they tried to force him to reveal Tony’s hiding place, he didn’t tell. The Egyptians were looking for a man. They did not know that Tony was actually a woman. Tony is my grandmother.

She took her money and went to a jeweler. She asked him to make her a heavy gold bracelet. You couldn’t take money, but you could take what was on your person. And so, with the gold bracelet on her wrist, she left Egypt and began her journey to Israel and the reunion with my grandfather. She has the bracelet to this day—silent testimony to her life’s journey and to what was she left behind.

In 2014, new legislation was passed in the Knesset marking November 30 as the day commemorating the exodus of Jews from Arab countries and Iran. The date was deliberately chosen, for it immediately follows the famous date of November 29, on which the UN voted to establish a Jewish state. Some might say it stands in its shadow. This was the moment that the stability of the Jewish communities in the various Arab countries began to falter. With the official declaration of an independent State of Israel now on the horizon, the Arab states changed their viewpoint regarding the Jews living among them. In an instant, these Jews had their world turned upside-down, and the communities began to collapse one after another, some at all once, others more slowly, over an extended period.

The vast majority of the Arab world’s Jews were forced to leave the countries of their birth, where their ancestors had lived for generations. This process, which began around the time of the establishment of the State of Israel, continued into the 1950s and 1960s, and communities with a history of hundreds and thousands of years ceased to exist.

What took place in Aleppo, Syria, immediately after the UN adopted the Partition Plan is just one example. As Hakham Tawil, the chief rabbi of the Aleppo community, described it: “The proclamation of the partition was on Friday. On Sunday . . . they [the Arabs] declared the whole city closed and went on strike. The Jews decided to remain in their homes . . . in the afternoon many gathered near the synagogue and began shouting ‘Falistin biladna v’yahud kalbana’ (‘Palestine is our land and the Jews are our dogs’), while the army remained silent. In the afternoon, the mob attacked the synagogue, destroying it with the army’s help . . . within half an hour everything was burned to the ground. They removed 40 Torah scrolls and used kerosene and oil to set them on fire. . .” Even in Egypt in 1948 the streets burned. Bombs exploded in the Jewish Quarter of Cairo, many Jews were arrested, synagogues were vandalized.

The Great Synagogue in Alexandria had been a bustling community center, even running its own school. Rabbi Ventura taught there. “If I met him today,” my grandmother told to me, “I would thank him. Thanks to him, we came to Israel.” He taught in Alexandria for eleven years until he was expelled for his Zionist activities. During those years, he ignited the spirit of the community’s younger members, including my grandparents, and awakened in them the dream of coming to Israel.

“He was different from the other teachers,” she said. “He excited us young people, he talked to us about Zionism, about Israel, without fear. And he not only spoke, he also acted. His way was by setting a personal example.”

Rabbi Moshe Ventura was born in Izmir in 1892 and served as a rabbi in Baghdad and Beirut. In 1937, he was called to be the chief rabbi of Alexandria. He educated generations of students at the Jewish high school he founded, including Eli Cohen, who would become famous for his service with Israel’s Mossad. He instituted a national Zionist consciousness among the Jewish community. In his view, the Jewish national revival, Zionism, was an integral part of the overall national awakening of the peoples of the Middle East, and consequently he frequently spoke publicly about the need for cooperation between the various Semitic peoples and in particular between “the Children of Israel and the Children of Ishmael.” In 1948, he was expelled from Egypt because of his Zionist activities.

As a child, I had mixed feelings about my family’s story. On the one hand, my grandparents were heroes. They were members of the underground in Egypt and did everything they could to reach Israel. On the other hand, they were Mizrahim (lit. “easterners”) and being a Mizrahi Jew was always some kind of uncomfortable, middle of the road existence. Sometimes when I would ask my grandfather about Egypt he would say “How long must I be judged by where my grandfather was born?” For him, he was an Israeli, a Zionist, an enthusiastic kibbutznik. He had left Egypt behind. His goal had always been the Land of Israel.

They worked hard to erase every trace of this Mizrahi identity, never speaking Arabic, only Hebrew. I had no idea how much Arabic they knew; it never dawned on me that it was the language they grew up with. Only the occasional French passed their lips.

Now, I look back to that time, for the stories in the shadows. The ones hidden by the strong glare of the sun. I look at this picture of the synagogue in Alexandria, within whose walls so many family memories were inscribed. I was never there. But I imagine my grandmother Tony standing on those steps in a white dress and reciting the Ten Commandments at her Bat Mitzvah and my late grandmother Suzy marching down them in her bridesmaid dress. Both of them in their festive dresses smiling at me, with smiles of childhood from a different world. A world that was and is no more. With only the stories left to preserve its existence. I try to collect all the hidden treasures from these stories before they disappear into the abyss.

I recently published my Hebrew book, Habaytah Haloch VeChazor (“Back and Again”), a historical novel that moves between the Egypt of those days and today’s Israel. It features a journey that sheds light on events that took place within Alexandria’s Jewish community during that time, as well as an attempt to go back and discover those treasures hidden in the shadows.