The Origin of the Jewish Hat

How did the pointed hat of European aristocracy become an anti-Jewish Symbol? And was it the forerunner of the modern skullcap? 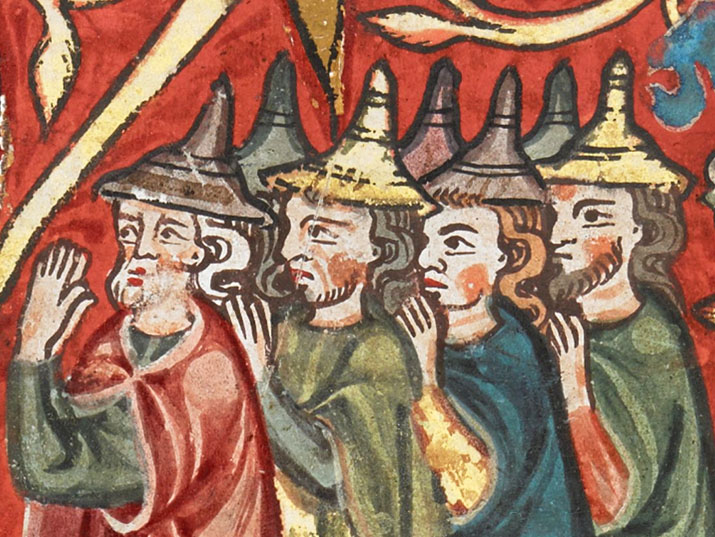 The yellow badge is undoubtedly the most infamous item of clothing in Jewish history. The practice of forcing Jews to wear this piece of cloth on the lapel of their clothing first appeared in parts of Western Europe during the 13th century. With their invasion of Poland, the Nazis revived the use of this insidious custom. In this article, we look at another article of clothing, the pointed hat, Pileus Cornutus in Latin, which some consider to be the precursor of one of the most recognizable Jewish symbols today.

Exactly when and where the pointed hat made its debut atop the heads of Jews in Europe is difficult to pinpoint. We know what the “Jewish hat” may have looked like mainly from images which appear in illuminated manuscripts.

One of the earliest illustrations of such a hat perched atop the head of a Jew is found in the early 14th-century Codex Manesse. In the image, we see the figure of Süßkind von Trimberg, a Jewish poet and troubadour, wearing just such a hat. In this medieval German poetry anthology, Süßkind is credited as the author of six of the poems inscribed in its pages. He happens to be the first German-Jewish poet whom we know by his full name.

Interestingly, the pointed hat was not always identified with Jews. This style could be found in various places in medieval Europe and was worn by aristocrats and high-ranking officials, among others. Before the 12th century, even English peasants would wear the hat in imitation of the upper classes. How then, did this popular hat eventually come to be associated uniquely with Jews?

At the height of its fashion, at the turn of the 12th century, the pointed hat suddenly fell out of favor, around the time of the tragic and violent encounter between West and East during the First Crusade. Before making their way to Constantinople and the Holy Land, some crusaders led pogroms against German Jewish communities. These fueled anti-Jewish sentiment and imagery, which featured negative depictions of Jews wearing the pointed hat. Thus the item began to be associated in the medieval European mindset with the “killers of Christ” and with treachery in general. What self-respecting Christian would want to wear such a hat after that?

Jews’ lives and dress changed dramatically following the decisions of the Fourth Lateran Council in 1215, which decreed that Jews living in Christian lands must dress in a manner that distinguished them from the Christian population. This may also be the reason behind the change in the design of the Christian clergy’s headdress. As you can see in the illustration below, a second point was added to the traditional single-pointed miter.

England was the first among several Western European regions to adopt the identifying badge. The German-speaking cities added to this also the pointed hat. In 1266, the city of Breslau, now Wroclaw, located in western Poland, became the first to adopt the pointed hat as an indicator of Jewish ethnicity. City legislators ruled that the Jews must wear the badge, and “return to wearing the pointed hat (Pileus Cornutus) identified with the Jews in these areas, which in their impudence they have ceased to wear.”

As opposed to the badge, which was clearly defined by size, shape, and the motif at its center, the shape of the pointed Jewish hat was not. As a result, several types of “Jewish hats” appeared in German areas. Some were immediately prohibited, while others were permitted to be worn. However, any attempt to enforce a single agreed-upon form failed.

As was often the case throughout history, rather than object, the Jewish communal leaders chose to view the decree as a positive commandment. Thus, various rabbis, from Menachem Hameiri (1249–1310) in Spain to Yosef Karo (1488–1575), author of the Shulhan Arukh, in Safed, ruled that a believing Jew may only utter the name of the Lord or pray when his head is covered. Some, like Rabbi Yaakov ben Rabbeinu Asher (1270–1340), recommended that Jews not leave their homes with their head uncovered. Thus, one can view the modern yarmulke or kippah as the direct descendant of the attempt to transform the “Jewish hat” into something to be proud of – an integral part of their religious life.

Below are a few examples of pointed hats in Hebrew and other manuscripts:

Depicted here is a religious debate between Christian scholars (left) and Jews (right), in a woodcut from 1483 by Johann von Armsheim: 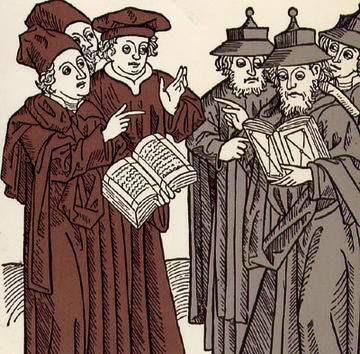 In this Yiddish ad from the early 20th century published by Yefet in Jaffa, we see various types of Jewish hats from Ashkenazi communities. The headline reads: “Jewish hats from different periods.” 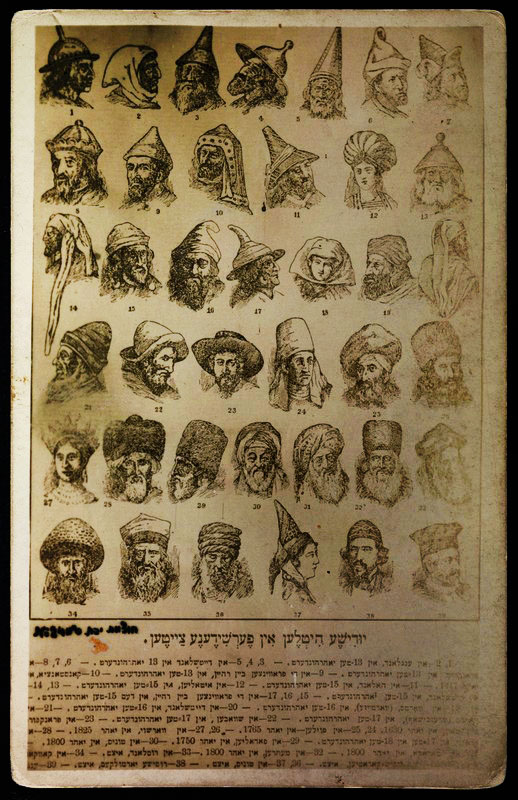 Lastly, in the Très Riches Heures du Duc de Berry, a 15th-century Christian Book of Hours, we see the Magi arriving to worship the newborn Jesus in the manger. They too wear the pointed hat. 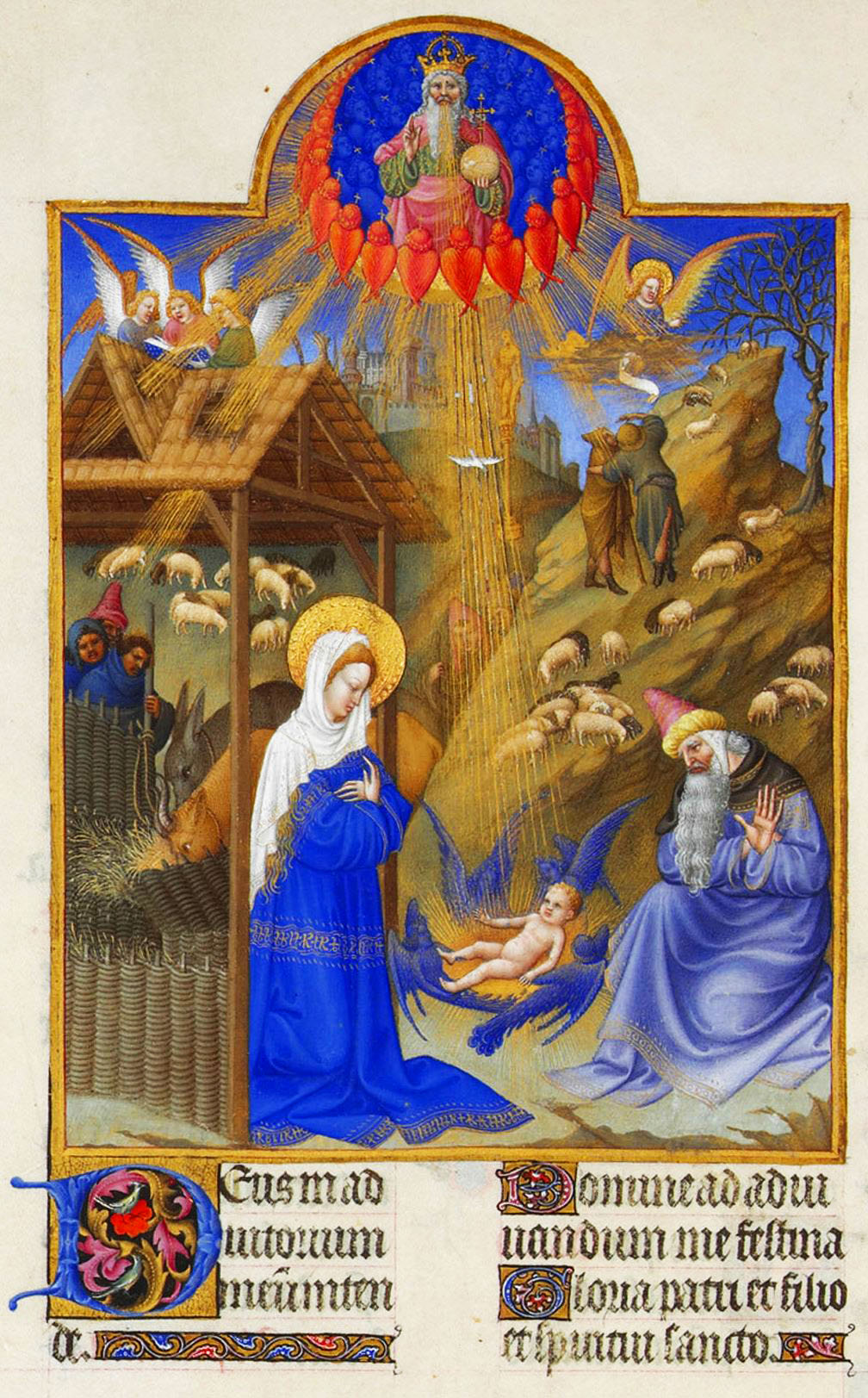