Judith Montefiore on How to Cook Like a Proper Jewish Lady

The name Judith Montefiore is probably not famous enough in Israel. A brief search of the National Library archives revealed that not only was she an equal partner in her husband’s charitable endeavors, but she was also likely the anonymous editor of the first Jewish cookbook published in England… 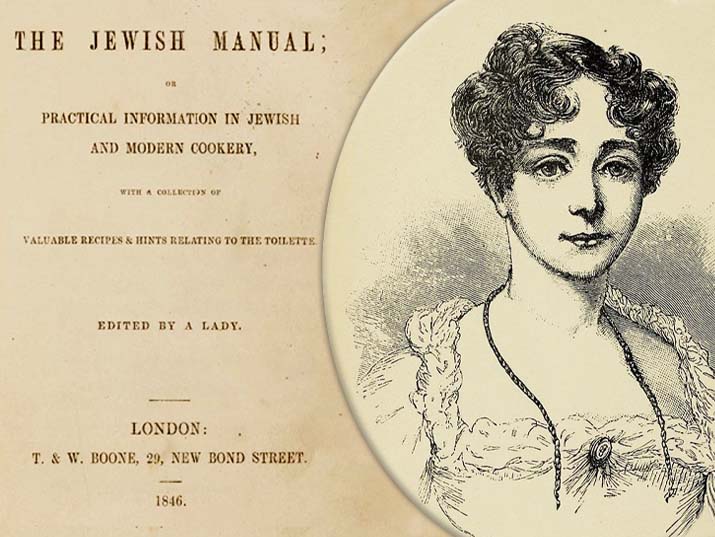 A portrait of Judith Montefiore alongside the book she most likely edited...

It would be difficult to imagine a more chauvinist cliché than “behind every successful man is a woman.” However, in the case of Sir Moses Montefiore, it is entirely true. Sir Moses and Lady Judith Montefiore’s joint charitable work preceded Prince Harry and Meghan Markle by some 200 years. And even though Sir Moses generally received most of the glory, Lady Judith was a full and equal partner in all his activities and decisions. In the mid-19th century, during her own lifetime, she received much more credit, not only from the Jewish community in the Land of Israel, but throughout the world.

The recent renaming of the footbridge crossing the Ayalon Highway in Tel Aviv from Gesher Yehudit (“Judith Bridge”) to Gesher Yitzhak Navon (“Yitzhak Navon Bridge”) was a good reason to dig through the Library archives in search of one of Jewish history’s most important women. Judith Montefiore was not only the figure behind the most significant financial contributions to the Old Yishuv in the Land of Israel, but she also worked to promote Jewish life everywhere while even engaging in diplomatic missions.

Among the National Library of Israel’s holdings is a copy of the first-ever Jewish cookbook and housekeeping guide published in England. Released in 1846, The Jewish Manual: Practical Information in Jewish and Modern Cookery (With a Collection of Valuable Recipes & Hints Relating to the Toilette) lists only “A Lady” as its editor. Since its publication, the book has been attributed to Lady Judith Montefiore, although there is no documentation or concrete proof to support this hypothesis. Not many Jewish women in Victorian England held the title of Lady, but there were a few possible candidates.

Beyond being a Jewish cookbook that—as the editor states in the introduction—instructs its readers on the art of preparing quality, delicious meals while following strict Jewish dietary laws, it is also a guide for the middle-class Jewish homemaker. The reader, of course, must have at least one maidservant to assist her in the management of the kitchen, household, and personal care—nothing out of the ordinary for any proper Jewish Lady. In the introduction, the anonymous editor notes that the book is written for young women as a guide to managing a rich and diverse table, the foundation for a happy family as well as successful social interactions.

The first part of the book is devoted to various Jewish recipes, or perhaps more correctly, the preparation of dishes in accordance with Jewish dietary laws. The book also includes recipes for specifically Jewish dishes, mainly of Spanish, Dutch and German origin, places that happened to characterize the food served at the Montefiore home. Anyone looking for recipes for Eastern European delicacies, such as gefilte fish, chopped liver, latkes or borscht, will be disappointed, as the massive Jewish migration from Eastern Europe to the West only began in the 1880s.

In this section of the book, the editor not only includes recipes but also a few tips for the sophisticated hostess. For example, the anonymous editor recommends not cooking with soy sauce or ketchup, which “inferior cooks” tend to add to their stews. Rather, these sauces should be placed on the table, and each guest may add them to their own taste.

The last part of the book is devoted to personal hygiene. According to the editor, while a woman’s intelligence is the true source of her beauty, she should also nurture her body. Toward this end, the book includes quite a few recipes and tips for facial, lip and skin care, including advice on keeping hands white and smooth.

Renewed interest in the book led some amateur historians to connect The Jewish Manual to Judith Montefiore. More thorough research revealed that the book’s recipes correspond to the type of cuisine served in the Montefiore home, but the connection did not end there. Careful perusal of the book reveals that the “Lady” who edited it was a member of the upper class, in addition to being a world traveler who also visited Palestine, from where she brought a recipe for soup. Judith Montefiore visited the Land of Israel in the mid-nineteenth century no less than five times while accompanying her husband. She was captivated by the charm of the Holy Land and even learned Arabic, in addition to Hebrew and four or five other languages ​​she already knew.

There is no conclusive proof that Judith Montefiore is the mysterious “Lady” behind the book, but we believe her to be. The Montefiores donated the funds to renovate Rachel’s Tomb on the outskirts of Bethlehem, and after his beloved wife’s death in 1862, Sir Moses Montefiore built a tomb on their estate in Ramsgate, Kent, modeled on that very edifice. Upon his death, he was buried there alongside her.