“The Jews were in shock…” – A Nazi View of Kristallnacht

Reports and books written by senior members of the Nazi regime deposited in the National Library of Israel reveal chilling texts describing "The Night of Broken Glass" from the Nazi perspective... 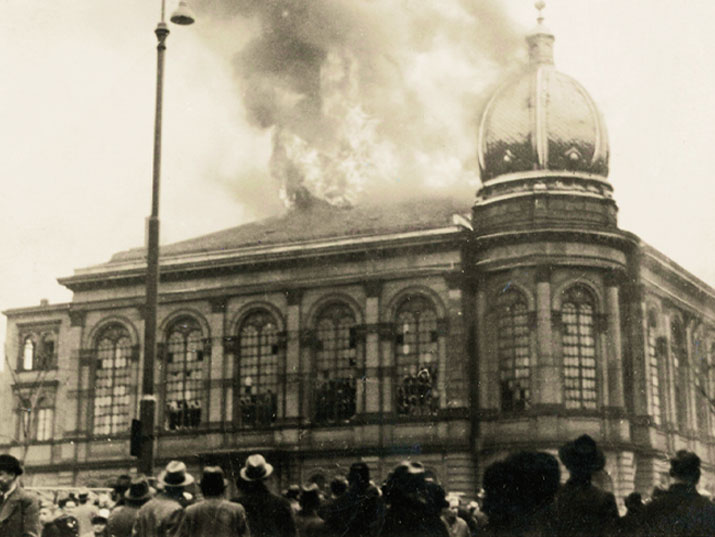 The Frankfurt Borneplatz Synagogue in flames on Kristallnacht

On November 7, 1938, a young Jew carrying a pistol entered the German embassy in Paris. There, at 9:30 a.m., he shot German diplomat Ernst vom Rath, gravely wounding him. He said it was in revenge for the suffering the Nazis had inflicted on his family.

The shooter, Herschel Grynszpan, was only 17 years old. His family lived in Germany, but they were Polish citizens. Herschel had been sent to live with his uncle and aunt in Paris, but he kept in touch with his parents, brother and sister. After the Nazi regime expelled the family along with thousands of other Jews who were citizens of Poland, they found themselves without food, clothing or money in the no-man’s land that was the German-Polish border region.

Adolf Hitler and Nazi propaganda minister Joseph Goebbels were told of the assassination within half an hour of the incident. They realized that this event represented a valuable opportunity. Adolf Eichmann, then head of the Jewish Department of the SS in Austria, had already identified the most effective way of ridding Germany of its Jews while keeping their money and assets in the country. In his view, antisemitic laws were not enough to achieve the goal because many Jews were willing to tolerate them and to remain in Germany. Only a severe and extreme act of state-organized terrorism could cause them to flee while they were still able.

As propaganda minister, Goebbels was the right man to handle the fallout of the assassination incident in Paris. However, that morning he was hurrying to the train to Munich, as the Nazi movement’s memorial day celebrations were to take place two day later, on the anniversary of the Beer Hall Putsch.

In his absence, Goebbels appointed Wolfgang Diewerge, an expert on antisemitic propaganda and a great believer in Jewish conspiracies, to run the campaign. Diewerge had extensive experience in the field of propaganda. In 1936, he led the propaganda campaign against the young Jew David Frankfurter, who had assassinated Wilhelm Gustloff, the founder of the Nazi movement’s Swiss branch. Diewerge wrote two books about Frankfurter, published in 1936 and 1937 (Frankfurter would eventually make his way to Mandatory Palestine. He passed away in 1982 in Ramat-Gan, Israel, at the age of 73).

Goebbels expected Diewerge to market the story of the assassination of Vom Rath as a global Jewish conspiracy with the aim of undermining the peace between Germany and France, in which Grynszpan was only a pawn, Diewerge was called to serve as the Ministry of Propaganda’s media spokesperson and to ensure prominent newspaper headlines to that effect. Moreover, Goebbels wanted Diewerge to make sure that the media reported that if the injured Vom Rath should die, the German people would seek harsh retaliation. This paved the way for Goebbels to stir the flames and “suggest” a pogrom without calling for one explicitly.

On the night of that bitter day, November 7, the German News Agency (DNB) sent Diewerge’s detailed instructions to the German media. Among other things, news outlets were instructed not to criticize the authorities in France, and they were even advised to use Diewerge’s pamphlets as an effective source of propaganda.

Vom Rath died two days after the shooting. Within hours of his death, on the night of November 9, 1938, pogroms broke out, targeting the Jews of Germany and Austria, and continuing into the next day, November 10. Allegedly, these were spontaneous riots by the masses in response to the assassination, but in fact, the violence was a result of the well-oiled Nazi propaganda system, which inflamed the masses, inciting and encouraging the brutal riots.

The Nazis called the event “Kristallnacht”—a phrase that describes the shattered glass windows of thousands of Jewish shops and synagogues, but completely ignores the murder of 400 Jews (according to one estimate), and the 30,000 Jewish men who were captured and sent to concentration camps. More Jews were murdered or committed suicide in the days that followed.

Diewerge’s robust propaganda activity, however, did not end with his incitement of the crowds in the lead up to Kristallnacht. This was just the beginning. He became an “expert” on Grynszpan and the effects of Vom Rath’s assassination. A year after the event, Diewerge published a new book, Anschlag gegen den frieden: ein gelbbuch über Grünspan und seine helfershelfer (“The War Against Peace: A Yellow Book on Grynszpan and His Accomplices”). Diewerge enlisted the help of foreign representatives of the Nazi movement and the Gestapo in preparing the book, which was intended to emphasize the connection between Vom Rath’s assassination and world Jewry’s supposed desire to incite war. The book was translated into French by the German Foreign Office and disseminated in France with the aim of balancing public opinion in the face of the many anti-Nazi publications that were being issued by Jewish organizations.

Diewerge’s book contains chapters on Jewish life in Germany, Jewish reactions to the assassination, and Kristallnacht. Much of the book is devoted to preparations for Grynszpan’s trial (which ultimately did not take place), the French legal system, as well as German claims of a Jewish conspiracy. Diewerge attempted to highlight the connection of world Jewry to the assassination, even writing of the price that, in his view, should have been extracted in retribution.

The National Library of Israel possesses several copies of the book. One of them is stamped with the seal of the SS-Verfügungstruppe, the military arm of the Nazi movement, which later became the Waffen-SS. In addition to the seal, there is a dedication to SS officer Gustav Adolf Pogalschnigg from Christmas, 1940.

The book itself has been uploaded to Wiki Commons and is accessible here.

Another fascinating glimpse into the events of Kristallnacht from a Nazi perspective, comes from the archive of the well-known Nazi hunter Tuvia Friedman (1922–2011). Friedman, who survived the Holocaust, joined the Polish police in 1945, where he served as a detective tasked with locating, capturing and interrogating Nazis. Later on he continued his work in Vienna, where he was instrumental in the arrest of many war criminals, and along the way, collected a great deal of archival material that helped in the location and prosecution of others.

One of the documents that Friedman donated to the National Library of Israel is a Stimmungsberichte, a report written in Vienna on November 10, 1938—that is, during or immediately after the events of Kristallnacht. The Gestapo and the SD composed these fairly objective reports, which described the feelings of the people and the atmosphere in the streets around events or government decisions, with the goal of allowing the Nazi authorities a realistic view of the actual situation on the ground. Herman Goering, one of the leaders of the Nazi regime, did not care for this approach and as early as 1936 ordered the Gestapo to stop writing them. Nevertheless, throughout World War II, the SD continued to research and publish reports on public sentiment.

The Stimmungsberichte in the Library’s collection describes what happened in Vienna on Kristallnacht. In the report, the district SD officer writes that the Jews were removed from their homes, with some also arrested. The goods of the Jewish-owned shops were collected. The Jews were in complete shock and did not even try to assert their rights. It is likely they were also angry with Grynszpan for what he had done. Members of the Nazi movement took part in the riots but did not wear Nazi uniforms or symbols to cover up the fact that they were indeed behind it. Surprisingly, most of the population opposed the riots against the Jews, and some raised their voices against the pogrom. The condemnation did not stem from the Viennese citizens’ love for the Jews, but from fear of violence and anarchy, and from respect for the law. According to the author of the report, the Viennese were softhearted and not fond of surprises of this kind. The officer also noted some conclusions from Kristallnacht—that more advance preparations should have been made, and that better propaganda could have improved the Viennese people’s willingness to participate in the riots against the Jews. 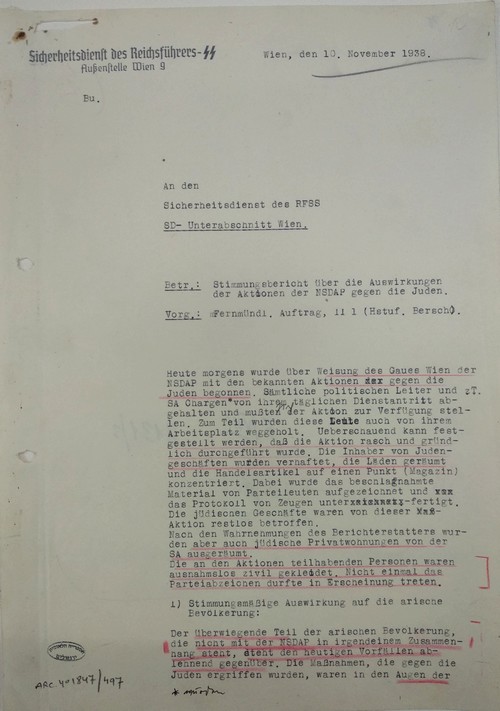 Grynszpan was not executed. Hitler and Goebbels wanted to use the card that had fallen into their laps, planning a show trial for Grynszpan that would prove to the world the destructive intentions of world Jewry. Diewerge and a Nazi jurist named Friedrich Grimm were in charge of the preparations and propaganda for the trial. After many delays, the proceedings were postponed indefinitely in May 1942. Despite rumors to the contrary, Herschel Grynszpan was apparently murdered in the summer or fall of 1942.

Grynszpan regretted that his actions had led to the murder of hundreds as well as mass destruction of property on Kristallnacht. And yet, some consider him responsible for the rescue of some 80,000 Jews who, because of these events, realized that they were no longer safe in Germany and made heroic efforts to flee, while they still could.