The Bar Mitzvah Gift That Survived the Holocaust

A special dedication in a copy of the book "Mesilat Yasharim" sparked some fascinating detective work tracing the history of the Austrian Jewish community during the Holocaust, and the story of a young man and his family who were murdered by the Nazis... 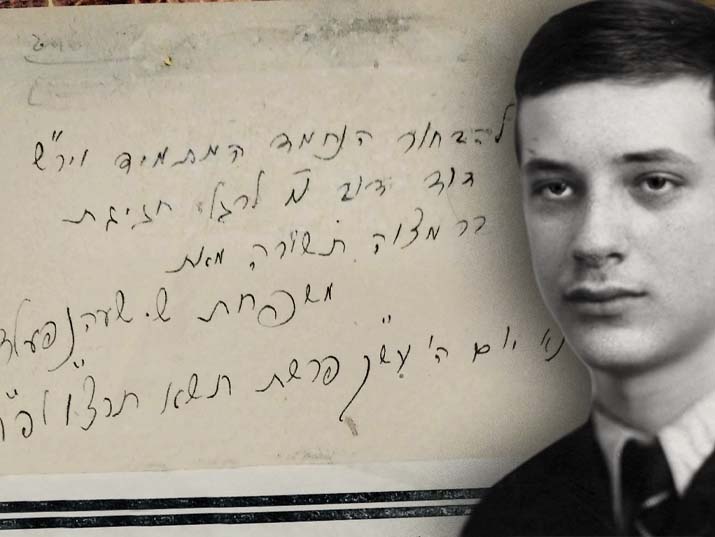 In March 1938, the German army entered Vienna and the Jews of Austria realized that it was time to leave, and the sooner the better. The annexation of Austria to the Reich, the Anschluss, and the implementation of the Nuremberg Laws brought with them violence, looting and humiliation for Austria’s Jewish citizens.

One of the sources of pride for the Jews of Vienna before the Holocaust was the large community library. The initial core of its collections arrived as early as 1814 with the donation of 133 volumes straight from the printing press. With the entry of the Nazis into Vienna, the library contained tens of thousands of books, including 21 incunabula (books produced during the first few years of the printing era) and 645 manuscripts, and was considered one of the most important Jewish libraries in Europe.

It was no wonder that the Nazis were happy to get their hands on it. They closed the library in July 1938 and moved it to Berlin a year later. Other Jewish libraries in Austria were also looted. Some belonged to Jewish organizations and others were private collections. When the Jews of Austria were deported to Eastern Europe, their property was taken to collection depots, including countless books.

In 1941, Austrian Jews were forced to don yellow badges. Soon Jews were being sent to Eastern Europe by transport. Most of Austria’s Jews managed to leave in time, but about 65,000 were murdered by the Nazis during the Holocaust.

After the war, the community’s books gradually surfaced in various locations across Europe. Part of the Vienna community library had been hidden from the Nazis in the city’s Jewish cemetery. Another part, originally sent to Berlin, was eventually found in Czechoslovakia where it had been moved to escape the bombing raids targeting Germany.

Hundreds of thousands of books stolen throughout Europe by the Nazis were brought to Austria during the war and discovered at Tanzenberg Castle by the British army. Most were returned to the countries from which they were stolen but some remained in Austria. It was only thanks to the tireless work of the National Library of Israel and the Israeli Ministry of Religious Affairs that some 80,000 of the Vienna community’s books eventually made their way to the National Library in Jerusalem.

The National Library affixed a special label to these books attesting to their past.

I recently came across one of these books. A copy of the work known as Mesilat Yasharim, by Rabbi Moshe Chaim Luzzatto (Ramchal), a classic text on Jewish ethics. 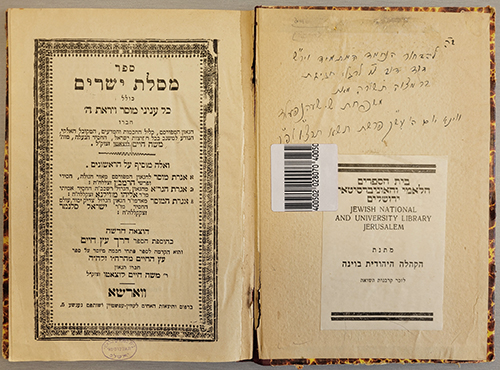 The cover page features a handwritten Hebrew dedication that was unfortunately hidden under a sticker. I turned to the Library’s conservation and restoration lab and with great professionalism and care they were able to remove the sticker and reveal the fascinating story of the book’s original owner.

To the nice persistent and [God-fearing] young man [may his candle shine] David Dov in celebration of his Bar Mitzvah, a gift from the family of S. Schonfeld, Vienna, Thursday, [on the eve of the Holy Sabbath], Parashat [Ki] Tissa, 5696 [1936]

David Dov’s last name did not appear, but the information in the dedication indicated that the Bar Mitzvah boy lived in Vienna. By calculating backwards from the Bar Mitzvah date, I realized that he was born in March, 1923. The next step was to locate him using Yad Vashem’s Central Database of Shoah Victims’ Names. The database is based on information gathered over the decades at Yad Vashem, Israel’s Holocaust memorial, through pages of testimony filled out by family members and friends of the victims.

With the help of the database, I discovered that David Dov’s last name was Neuwirth and that he and his parents and two sisters were murdered in Minsk in 1942. I found more information in the Austrian Victims of the Holocaust database on the Documentation Centre of Austrian Resistance (DÖW) website. David Dov and his family left Vienna on September 14, 1942. Four days later they arrived in Minsk. The train continued to the Maly Trostenets estate not far away. When they finally got off, the Jews of Vienna were marched to the killing pits in the forest and shot to death.

The witness who filled out the testimony page was Ilse Deutsch, David Dov’s sister. It turned out that his older sister had managed to escape from Austria in time. According to the information on Ilse on the genealogy website Geni.com, she passed away in 2018 but was survived by her four children in London.

With some help from my own family in London, I was able to get in touch with some of the family members. Devorah, one of Ilse’s granddaughters who lives in Israel, shared a wealth of information about the family. She explained that her grandmother left Vienna with one of her mother’s sisters. They were in Germany during Kristallnacht but managed to reach England before the outbreak of World War II. There she worked as a kindergarten teacher, got married and raised a family. One of the Neuwirth family’s neighbors in Vienna kept some family photos and a Kiddush cup that David Dov received as a gift for his Bar Mitzvah. These items are in the hands of the family today.

This amazing story made its way within hours from Jerusalem to London to New York and back. Rabbi Shabtai Schonfeld’s granddaughter made contact and added even more information. It was Rabbi Schonfeld who gave the Mesilat Yesharim book to David Dov in 1936. The Schonfeld and Neuwirth families were good friends in Vienna. David Dov was the same age as Rabbi Schonfeld’s son who later became a well-known rabbi in Queens, New York.

The Schonfeld family left Vienna on their own immediately after the Anschluss. Before leaving the country, all Jews were required to fill out an immigration questionnaire that included family details, names, ages, occupations, immigration destination and vocational training. The Neuwirth family’s forms are in the Central Archives for the History of the Jewish People at the National Library of Israel. This is where a large part of the archives of the Vienna community is preserved today.

Why then did the Neuwirth family fail to leave Austria in time?

Devorah provided the answer. David Dov was ill with polio. The family sought to immigrate to the U.S., but this depended on passing a medical examination. The U.S. Embassy in Austria apparently did not allow David Dov to immigrate and his family remained in Vienna. David Dov’s father, Rabbi Simcha Shmuel Neuwirth was a community rabbi and principal of a Jewish school in Vienna. He decided not to abandon his congregation and so most of the family died as martyrs al Kiddush Hashem.

The family story was preserved by David Dov’s sister Ilse in London, and now with the help of the Mesilat Yesharim book, it is being told and preserved by the National Library of Israel as well.