When a Grenade Exploded in the Knesset, Israel’s Parliament

Home > History of Israel > When a Grenade Exploded in the Knesset, Israel’s Parliament
Land of Israel

No one believed it could happen, and even today it is difficult to comprehend how easy it was. In 1957, a man walked into the Knesset, then located in downtown Jerusalem, with a grenade in his pocket. He proceeded to throw it into the assembly hall. David Ben-Gurion and Golda Meir were among those injured. The explosion can be heard in a recording found in the National Library of Israel's Sound Archive… 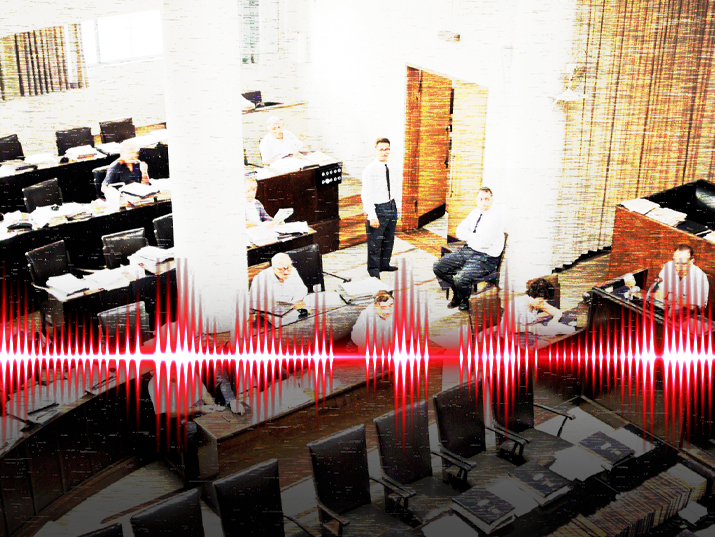 “Doctor! Doctor!” – came the yells from the assembly hall. “Get the doctors! Move! Ambulance!”, others called out. These exclamations took place right after an explosion shook the Knesset assembly hall, the main chamber of Israel’s parliament. Back then it was located at Frumin House, on King George Street, in downtown Jerusalem. A recording found in the National Library of Israel’s Sound Archive documents these moments in history, a recording which originated in the archives of the Knesset itself.

Hear the moment the grenade was thrown into the Knesset’s assembly hall:

It was October 29, 1957. The young State of Israel was approaching its ten-year anniversary. At the time, the country’s parliament held its meetings in a rather ordinary residential building that housed commercial establishments on its ground floor. The building had been renovated to allow the Knesset to convene in the structure. Unlike the current Knesset location, Frumin House was in the center of the city, on a crowded, busy street. Security was handled by two unarmed guards stationed at the entrance.

On that day, 24-year-old Moshe Dwek, simply walked into the Knesset building and obtained permission to sit in the visitors’ gallery, overlooking the assembly hall. He had a hand-grenade in his possession, that no one had been able to detect. At the time, the Members of the Knesset were discussing matters relating to international and security affairs in the assembly hall. Yitzhak Rafael, from the Mafdal (national religious) party, had been addressing the assembly, shortly after 6:00 pm, Dwek tossed the grenade from the gallery into the assembly hall. The explosion was followed by long moments of chaos and confusion, that we can now hear in the recording.

The grenade thrown by Dwek landed between the dais and the cabinet table. The explosion injured the Minister of Transportation, Moshe Carmel, and the Minister of Religion, Haim-Moshe Shapira (who, in fact, adopted the name Haim, which means “life” in Hebrew, after he recovered from his severe injury). Prime Minister David Ben-Gurion and Foreign Minister Golda Meir were both lightly injured by shrapnel.

Dwek was immediately seized by those that were seated next to him, who had seen him throw the grenade. During his initial interrogation, he sounded confused and scared, and immediately expressed remorse for his actions. It was subsequently revealed that Dwek had sued the Jewish Agency for alleged damages he had suffered, and that his claim was rejected. His response was to threaten the President of the Supreme Court of Israel, and as a result he was sent to a mental hospital. This was apparently his motive for the assassination attempt.

Shortly before 9:00 pm that same day, the Knesset again convened in the assembly hall. Yosef Sprinzak, who was the first Speaker of the Knesset, apprised the assembly of the event. His address to the Knesset can also be heard in the recording from the Sound Archive: “At 6:35, a grenade was thrown into this hall, injuring the Prime Minister, David Ben-Gurion, Minister Moshe Shapira, Foreign Minister Golda Meir, Transportation Minister Moshe Carmel. The Prime Minister is in good condition, his injuries are superficial, caused by shrapnel which hit both of his arms as well as his left leg. He is being treated for these wounds.”

Regarding the man detained by the authorities, Sprinzak stated: “The police arrested the man, his name is Moshe Hacohen Dwek, and the police have reason to believe that he was the one that threw the grenade. The man is under investigation and the police are investigating the motives of the crime” These comments appear in the protocol proceedings from the session at the Knesset.

All those injured eventually recovered. The Prime Minister’s hospitalization resulted in its own tragic story, with a not-so-happy ending. Even though he was claimed by some to be mentally unstable, Dwek was found fit to stand trial and he received a 15-year prison sentence. In 1988, he returned to the public arena for a brief period and founded the Tarshish political party, which ran in the elections that year. The party assumed the Hebrew letters זעמ (meaning “rage” in Hebrew), and demanded equal rights for immigrants from the Arab countries, however it did not reach the minimal electoral threshold when the votes were cast.

The event triggered many changes in the day-to-day functioning of the Knesset. In the visitors’ gallery, secure partitions were installed that separated the gallery and the assembly hall, while security guards were required to meticulously inspect those entering the building and the items they brought with them. In addition, the incident led to the formation of the Knesset Guard in 1958, which to this day is responsible for the protection of the Knesset building and its members.