In the midst of World War I, two old Jews, Chaim Weizmann and General Edmund Allenby teamed up to ensure that the holiday could be celebrated properly... 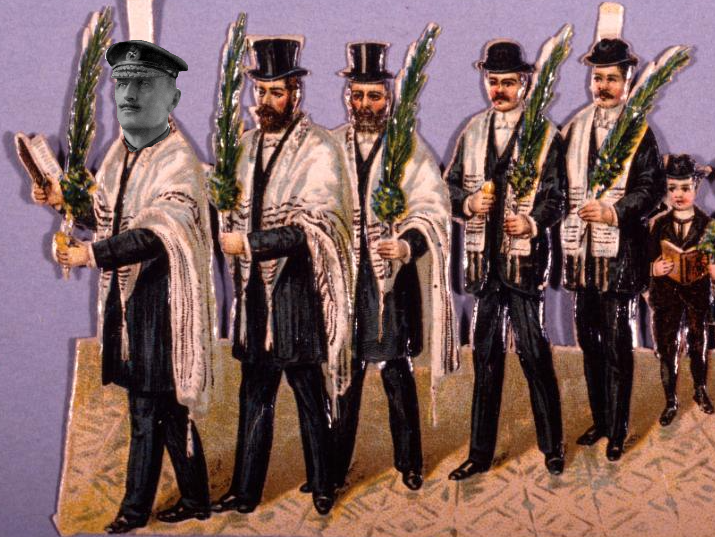 General Edmund Allenby may not have personally participated in the Sukkot celebrations of 1918, but many Jews had reason to thank him that year (Composite image: Allenby, ca. 1917 and a ca. 1900 paper cutout depicting observance of the Sukkot holiday / Public domain)

Chaim Weizmann waited patiently for the one train that could take him to Cairo that day.

As the departure time approached, so too, did two seemingly ancient men. Weizmann estimated that their combined age must have been 180.

The Zionist leader had come to the Land of Israel as head of the Zionist Commission – a delegation of prominent figures tasked with gauging and laying down initial foundations for a Jewish state following the British government’s Balfour Declaration the previous autumn.

The First World War was still raging and the Commission, which a few iterations later would become the Jewish Agency, faced a host of problems. The heterogenous group was ripe for internal division, with members from different countries and ideological persuasions. Its role and authority rather vague, the local British military command was all but unsupportive despite official backing from London. Poverty and disease were rampant and the internal politics of the small local Jewish community needed to be addressed, as did the concerns and opposition of the local Arab population, which the Commission sought to engage in productive dialogue.

All of these issues and many more were on Chaim Weizmann’s mind one day in September 1918 as the elderly men approached him.

In his autobiography, Trial and Error, Weizmann recalled how besides the men’s age, the thing that immediately struck him was that he did not recognize either of them:

“By this time I was under the impression that I had met every man, woman and child in the Jewish community of fifty thousand, most of them several times.”

They looked closely at Weizmann and his luggage.

“But you are not really going away? You can’t go yet. There are still some matters of importance to be settled here.”

The brilliant scientist and statesman knew very well that there were in fact many matters of importance that remained to be settled – some of them for decades to come.

Yet, while poverty, disease and conflict may indeed have troubled the men, those were not the issues about which they had come to talk to Weizmann.

“Do you not know that the Feast of Tabernacles [Sukkot] is almost upon us, and we have no myrtles?,” they asked, referring to one of the “Four Species” required to properly observe the holiday in accordance with Jewish law.

“Though I was familiar enough with the need for myrtles… it had somehow slipped my mind, and it had not occurred to me to include this particular job among the many chores of the Zionist Commission, operating in the midst of a bloody war,” Weizmann recalled in his memoirs.

Not fazed, he responded, “Surely you can get myrtles from Egypt,” to which the old men looked pained:

“…one must have myrtles of the finest quality. These come from Trieste. In a matter of high religious importance, surely General Allenby will be willing to send instructions to Trieste for the shipment of myrtles.”

Weizmann explained that the world was at war and that Trieste was located in enemy territory.

“But this is a purely religious matter,” one of the men responded, “a matter of peace. Myrtles are, indeed, the very symbol of peace…”

As the time for his train’s departure neared, Weizmann, ever the visionary pragmatist, tried persuading the two men that they would simply have to do with inferior Egyptian myrtles. Though seemingly oblivious to the geopolitical realities of a world war, the ancient men in fact did know something about importation restrictions and pointed out to Chaim Weizmann that myrtles could not be brought from Egypt because a quarantine was in place and the British authorities forbade importation of plants from Egypt to Palestine.

Somewhat stumped and soon to miss his train, Weizmann promised the men that he would make every possible effort to secure a myrtle supply in time for Sukkot, yet he had no idea how exactly he might do that.

“I travelled down to Egypt genuinely worried over this question of myrtles and the quarantine; and even more worried by the responsibility for some thousands of people living, like these two old gentlemen, in a world of their own so remote from ours that they seemed as unreal to us as the war did to them. By the time I fell asleep in the train I was no longer sure what was, in fact, real, the war or the Feast of Tabernacles.”

The countless other issues at stake and meetings in Cairo all but drove the myrtle promise from Chaim Weizmann’s mind. Yet then, just before his boat sailed and he took leave of General Allenby, the legendary liberator of Jerusalem (not Trieste) exclaimed:

“By the way, about those myrtles!  You know, it is an important business; it’s all in the Bible; I read it up in the Book of Nehemiah last night. Well, you’ll be glad to hear that we have lifted the quarantine, and a consignment of myrtles will get to Palestine in good time for the Feast of Tabernacles!”