The Happy Mistake That Gave Us the “Soup Almond”

How did a bureaucratic mix-up during Israel’s 1950s austerity period lead to one of Israel's most unique culinary innovations? How did an Ashkenazi Jewish Passover recipe end up on the holiday table of every Jewish Israeli, and where does the distinctive yellow color of the soup almond come from? In short, here is the story of Israel’s prized "shkedei marak" 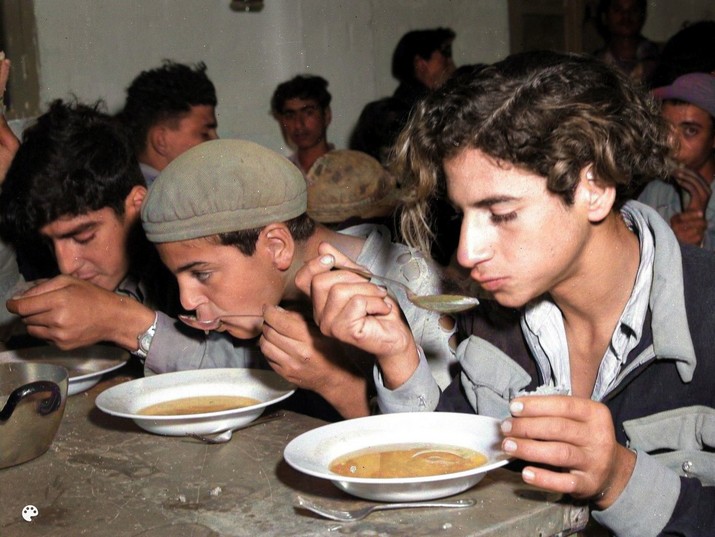 Nothing fills us with more pride than the list of exclusive Israeli inventions, right? Every year during the Independence Day ceremony, we are reminded of how we invented drip irrigation, the cherry tomato and the disk-on-key. But there is one Israeli invention that is a special source of national pride and that no holiday table dares be without—the “soup almond”. Yes, we are referring to those crunchy, yellow, crouton-like additions to soup, which miraculously appear just about everywhere during holiday season in Israel. “Soup almond” is a literal translation of the Hebrew term shkedei marak, which is sometimes used even by English speakers (you know who you are), though others prefer “soup mandels”, “soup nuts” or the Yiddish mandlakh. We set out on a mission to discover out how this unparalleled genius invention came about.

After all, what’s the point of soup if it doesn’t have a little something extra—chopped vegetables, dumplings, noodles, croutons or whatever strikes one’s fancy. This is how soup becomes a satisfying and heart-warming dish, and this was also the thinking of the Osem company’s food engineers.

It was the early 1950s, the days of tzena— Israel’s national austerity plan. Two years earlier, Osem had come up with another brilliant invention to deal with the rice shortage. They called it petitim, tiny toasted pasta balls sometimes referred to as “Ben-Gurion rice” (or “Israeli couscous” in later years). The company was now facing another rationing crisis. According to the story on the Osem website, each manufacturing plant received a monthly allowance of flour. It’s not clear whether human error or some other unfortunate accident was to blame, but one month the Osem plant did not receive its flour allowance.

Everyone is familiar with the saying, “when life gives you lemons, make lemonade”. In this case, the lemons were 300 kilograms of oil gifted to the Osem company to compensate for the missing flour. Lemonade was going to be a long shot, but during a time of severe shortage, Osem wasn’t about to pass on the offer. But what to do with so much oil? According to company’s website, they decided to use the oil to fry flour. And lo and behold—a miracle: this is how the soup almond as we know it was born. The color of fried flour may not be very appealing, so a bit of turmeric extract turned them a bright yellow.

Osem’s soup almonds didn’t appear out of thin air, of course. First there were zup mandlen, “soup almonds” in Yiddish, which were added to the soup that Ashkenazi Jews ate during Passover. They were made from matzah meal and egg and were apparently much larger, perhaps more similar to the matzah balls (kneidlach) that many know today. But, unlike the matzah ball which is boiled, the homemade soup almonds were either baked or fried, just like today’s soup almonds.

Like any product created by accident or under improvised circumstances, the initial appearance of the Osem soup almonds did not resemble what they look like today, and there were also variations in name and use. In the beginning, Israeli soup almonds were made in two forms: one was diamond-shaped and flatter (but larger than today’s version), and the other was oval like an egg and was called an “egg almond”. The home-made Ashkenazi soup almonds may have been the inspiration, but the company believed that the fried flour morsels might also have other uses. Early newspaper ads and posters preserved in the Ephemera Collection at the National Library of Israel recommend adding the egg almonds to cold or hot drinks, and even to a glass of beer. Feel free to try this at home and let us know what you think.

The product evolved over time. It was adapted to the local market and was given new and sophisticated packaging. The soup almond finally settled on its square and puffy shape, unique yellow color, salty taste, becoming a must-have product on every holiday table, because how can you eat soup without it? Today you can buy shkedei marak in a resealable bag or in a plastic container. And companies besides Osem make them as well.  Some even eat them by the handful as a snack—hold the soup! Who are we to judge?