Meet the Ottoman Kavass Guards, Protectors of the Chief Rabbi

Home > Jews of the Ottoman Empire > Meet the Ottoman Kavass Guards, Protectors of the Chief Rabbi
Land of Israel

With the rise in status of foreign and non-Muslim dignitaries in the Ottoman Empire in the mid-19th century, the Ottomans assigned special bodyguards to protect diplomatic consuls, Christian patriarchs, as well as the chief rabbis of Jewish communities throughout the empire. The church patriarchs continue to use these bodyguards to this day, but what happened to the kavass guards that were assigned to the Jews? And what does all this have to do with Rabbi Ovadia Yosef? 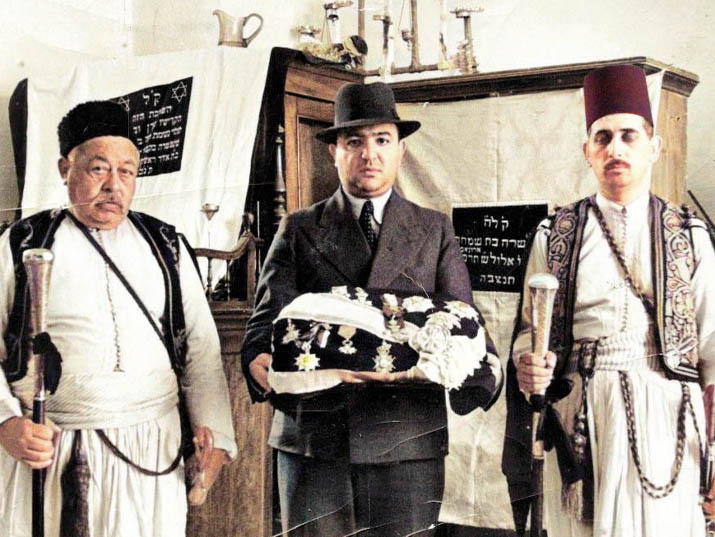 Bezalel Mevashov (right), Hacham Rafael Azriel, son-in-law of Chief Rabbi Yaakov Meir (center) and the kavass Yaakov Bachar (left), 1939. This item is part of Archive Network Israel and is made accessible through the cooperation of the Ben-Zvi Institute, the Ministry of Heritage and Jerusalem and the National Library of Israel

In the summer of 1969, Rabbi Ovadia Yosef was appointed Chief Rabbi of the first Hebrew city, Tel Aviv. The inaugural procession left the religious council building for a motorcade parade around the city in honor of the new appointee. At the head of the procession, marching in front of the rabbi, the mayor and their attendants, was an unusual figure: an elderly man, dressed in official uniform, carrying a large wooden staff with a silver pommel and wearing a belt holding a curved and decorated sword. Stern-faced, he led the convoy, tapping out a uniform rhythm with the tip of his staff, and only after the new Chief Rabbi of Tel Aviv was safely seated in the waiting car did he get into the front seat. Later he could be seen standing to the left of Rabbi Ovadia, acting as his personal assistant. This is one of the last records we have of a Jewish kavass, a relic from another time in the Holy Land.

Bodyguards for Foreigners in the Ottoman Territories

To understand why the Chief Rabbi of Tel Aviv was accompanied by a bodyguard wielding a staff and a sword, we must look back to the mid-19th century. At the time, the Ottoman Empire was trying to quash the rebellion of Muhammad Ali, an Ottoman army officer who had taken control of a large region encompassing both Egypt and Palestine. In one of the last battles between the empire and the forces controlled by Muhammad Ali, who is considered the founder of modern Egypt, the Ottomans had no choice but to accept help from foreign powers, including the British Empire, alongside the Russians and Austro-Hungarians. Recognizing the weakness of the great Muslim empire, these nations offered their help in exchange for the advancement of their own interests within the Ottoman territories. This led to the “Capitulations” – contracts signed between the Ottoman Empire and the various European powers.

As a result of these contracts, the foreign consuls became sovereign over the citizens of their respective countries living in Muslim territories. This meant the European countries could establish civil systems to serve their own citizens, which ran parallel to those provided by the empire, such as foreign banks, a post office, hospitals and schools. Later, the European countries demanded that the capitulation rights also be applied to non-Muslim populations in the Ottoman Empire, regardless of their origin—including mainly Christians and Jews.

Thus, a situation was created in which, for the first time in the Ottoman Empire, non-Muslims were granted enhanced rights and Christian and Jewish religious leaders were empowered to represent the communities they headed. The office of the Jewish Hakham Bashi, which the Ottoman authorities united at that time with the office of the Rishon Le’Zion (Chief Rabbi), received a new validity, with subordinate rabbis being appointed to head the various Jewish communities in the empire. In view of the changes and the new rights granted within the capitulation contracts, the Ottoman authorities decided to assign bodyguards to the consuls, foreign diplomats, and various VIPs of one sort or another, as well as to non-Muslim religious leaders.

These guards, called “kavass” (the meaning in Ottoman Arabic is “archer” or “bowman”), in fact received the status of a soldier or policeman, even though they did not belong to any official body. The role of the kavass was to walk in front of the official or dignitary they were accompanying, to clear the way for them, and if necessary to protect them from harassment, mobs or even attack. European institutions, such as banks, received permission to maintain a kavass that would protect their interests. Since the kavass did not belong to the police or the army, Jews and Christians could also hold this position, thereby circumventing the ban on non-Muslims carrying weapons.

The kavass were colorful characters, whose dress mimicked the style of the dress uniforms worn by the Ottoman military in the mid-19th century. Their uniforms consisted of wide-legged oriental-style pants, a large embroidered coat, a wide sash and “Fez” hat (tarboush), which was common throughout the Ottoman Empire at the time. Most also sported thick mustaches in accordance with the day’s fashion. As mentioned, they wore a belt with a large sword, and always carried a large staff. This staff was usually topped by a pommel made of silver or some other metal, with a steel tip attached to it, in keeping with its function as a weapon. Yet the staff had another purpose besides: the kavass would use the stick to tap the pavement while leading a religious procession or accompanying a dignitary. The taps were meant to signal to the crowd to clear the way. If at first, the kavass’ role was intended to protect foreign office holders within Muslim territory, towards the end of the Ottoman Empire the presence of kawass became a status symbol, and they were often selected to perform important duties due to their visibility and prestige.

Every Christian patriarch was assigned a kavass, and the custom continued even after the collapse of the Ottoman Empire, with the appointing of a kavass for the British High Commissioner. Muslim kavass guards sometimes found themselves in a “conflict of interests”. Journalist Uri Cesari recounted an incident that took place during the 1921 riots, when the Anglo-Palestine Bank was stormed by an angry mob: “The bank had a Muslim guard, a loyal guard, a ‘kavass,’ a figure bequeathed to us in the capitulations.” Later, Cesari described how the kavass promised that he would not let any trespasser through the bank’s doors, but the Jews, unsure with whom the kavass’ loyalty truly lay, chose to flee anyway.

The Ottoman kavass became part of the Rishon Le’Zion’s honor guard along with many important rabbis. In his memoir of the German Kaiser’s visit to Jerusalem, David Yellin writes: “Two armed men dressed in their official clothes with silver staffs in their hands walk in front of our Chief Rabbi.” In his short story “The Jewish Kavass,” the author Yehoshua Ayzenshtadt (Barzilai) describes how at the beginning of the 20th century a Jewish kavass from Jerusalem was chosen to protect a large sum of money collected by the Jewish community in the Land of Israel: “In the Eastern countries, this person dressed in strange clothing is called ‘kavass.’ These people serve the royal envoys, religious heads and all the dignitaries; anyone who has a ’kavass’ is known to be important.” Ayzenshtadt goes on to describe the kavass’ heroic qualities as well as the amount of fabric needed for his traditional costume, given his large size. In his story, Ayzenshtadt, a European Jew, drew a portrait of the kavass that was clearly influenced by Orientalist tales: a big and strong Jerusalemite, a Jew who speaks Arabic and is familiar with the city as only a native son can be.

With the establishment of the State of Israel, the kavass in their original traditional appearance remained only in the area of Jerusalem. Embassies were stationed in Tel Aviv, and the Christian patriarchs are the last to still have a kavass leading their processions. Most have abandoned the full oriental dress and are seen wearing it only on special occasions. Instead of the embroidered pants and coat, most kavass guards accompanying the Christian patriarchs wear blue suits, though the tarboosh remains, a sign of the past. They also still carry the silver-tipped staffs and swords.

For the bodyguards of the Christian patriarchs, being a kavass is often a lifelong profession and many have adopted hallmarks of the particular Christian church they belong to. For example, the kavass guards of the Orthodox Patriarchate wear the symbol of the Orthodox Church on their lapel, whereas some of those who serve the Armenian Patriarchate refuse to wear the fez, which, as mentioned, is a distinctly Ottoman symbol, in protest of the Armenian genocide committed by the Ottoman Empire in the First World War. The kavass guards of the Rishon Le’Zion, whose position was integrated into the Israeli Chief Rabbinate, continued to serve the rabbis in the early years of the State of Israel. Little by little they became akin to personal assistants of the Chief Rabbi, and wore uniforms somewhat similar to those of the Knesset Guard, with a matching cap in place of the Ottoman headdress.

Eventually, they became a mere symbolic relic of a bygone era. In 1968, Chief Rabbi Yitzhak Nissim’s kavass made headlines, when the rabbi and his assistant visited the Western Wall plaza and decided to remove a partition that was illegally erected there by the Ministry of Religions. In 1969, a bodyguard accompanied Rabbi Ovadia as he set out on his new path as Chief Rabbi of the city of Tel Aviv-Jaffa. Three years later, when he was elected Sephardic Chief Rabbi of the State of Israel, Rabbi Ovadia abolished the position of the rabbi’s kavass guard. This spelled the end of the role of the Jewish kavass, although the Christian counterparts can still be found in the Old City of Jerusalem, accompanying the church patriarchs who have not yet decided to relinquish this symbol of honor and dignity from the past.