How Did Jews Flee to Israel From the Arab World?

Home > Eastern Jewry > How Did Jews Flee to Israel From the Arab World?
Land of Israel

A look at some of the brave souls who risked their lives to reach Israel before and just after the state's founding... 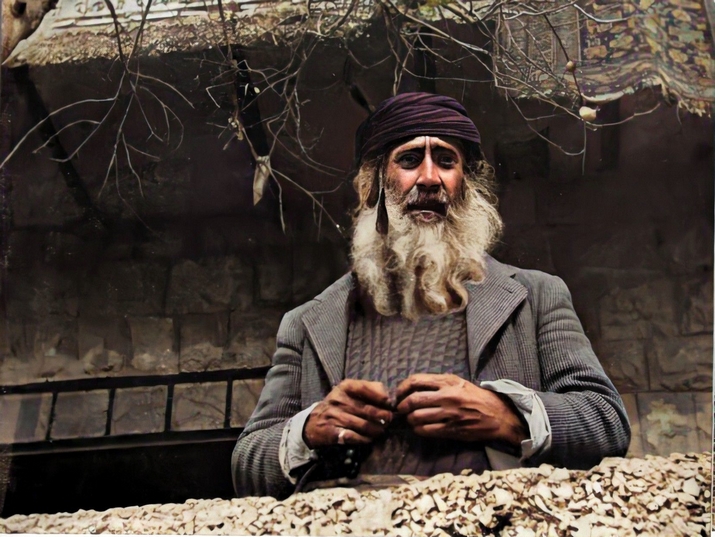 A new immigrant from Morocco in Jerusalem, ca. 1950 (Photo: Werner Braun). This photo is part of the Israel Archive Network project and has been made accessible thanks to the collaborative efforts of the Yad Ben Zvi Archive, the Ministry of Jerusalem and Heritage and the National Library of Israel

It’s an incongruous sight: a WWII plane marooned among the trees at the Atlit Museum of Clandestine Immigration near Haifa.

But this latest addition to the army camp where illegal immigrants were detained during the British Mandate is no ordinary plane. It took years to be tracked down – and it was finally found in Alaska.

The plane, a Commando C-46,  is a replica of that which was used for Operation Michaelberg – a 1947 mission to transport 150 illegal immigrants to British Mandate Palestine from Iraq and Italy.

It was the first time that a civil aircraft was used to transport illegal immigrants from the Muslim world.

Before the establishment of the State of Israel, most clandestine arrivals to Mandatory Palestine came from European countries, yet hundreds of thousands of Jews also risked life and limb to flee Arab and Muslim states.

Illegal immigration before 1948 was known as “Aliyah Bet,” short for “Aliyah Bilti Legalit“, which literally means “illegal immigration”. It was run by Mossad LeAliyah Bet, a section of the Palmach, the elite fighting force of the Haganah, and was funded by the American Jewish Joint Distribution Committee. Aliyah Bet was mainly by sea in defiance of quotas imposed by the British White paper of 1939.

In the post-war years preceding the creation of the State of Israel, some 100,000 immigrants arrived. It is claimed that as many as a third came from Arab or Muslim countries. After Israel was established this task fell to the Mossad, Israel’s secret service.

Once founded, Israel could fling open its gates and accept all Jews who wanted to come. There followed some of the greatest  migrations in history by land, sea and air: 650,000 Jews arrived from Arab countries – 90 percent of the communities of Libya, Iraq and Yemen, a third of the Jews of Morocco.

But the window to leave soon closed. Arab countries would not allow their Jews out – they were hostages to the conflict. This was the case for six years in Morocco, until the 1970s in Iraq and Egypt and until the 1990s in Yemen and Syria.

Ironically, during WWII around 4,000 Yemenite Jews came as legal immigrants, because there were not enough European Jews to fill the quota of legal immigration permits set by the ruling British.

In 1944, it became Zionist policy to encourage immigration from Arab countries: the so-called “One Million Plan”. As Arab antisemitism rose, the plight of Jews became more desperate. But while the British were in charge, the only way into Palestine was to try to run the shipping blockade – or employ an overland smuggling route.

Zionism in French-ruled North Africa became very active in 1943 but emigration did not become legal until 1949. Local Zionist youth groups set up an underground network with the help of smugglers. Almost 1,000 Jews passed through Tanas, a secret camp in Algeria, and boarded Haganah ships bound for Palestine.

Shmuel Sibon, a teenager from Sefrou, Morocco, spent a month at Tanas, and was one of the few who was not a member of a Zionist group. Food was short. Lice was plentiful. He boarded the Yehuda Halevi ship from the Algerian coast. A voyage which should have taken days lasted three weeks. The ship was surrounded by British destroyers. One holed the ship, and water poured in. The Yehuda Halevi was diverted to Cyprus where Sibon spent nine months. The camp inmates greeted the passengers, asking, “Where are the Africans?” as they expected to see black Jews.

The famous Exodus had 50 North Africans on board – “Africa on the Exodus” – a tiny proportion of the 4,000 passengers. Shlomo Busqiuila was one. There was nothing to eat, he reported.  The best thing for him was that he met his wife on board: Hava, a Hungarian Holocaust survivor.

In Libya, the Jewish Brigade fighting alongside the British did much to inspire the local community to make Aliyah – and 90 percent did so. Until 1949, however,some 1,300 made it to Israel via Italian DP camps. They were survivors of horrific wartime labour camps such as Giado and the 1945 Tripoli pogrom in which 130 Jews had died. Many did not have citizenship. The International Refugee Organisation was unsympathetic and claimed they were not asylum seekers but economic migrants.

After Israel was declared, emigration from Morocco became legal: waves of Jews headed for the border with Algeria. After  independence in 1956, Morocco introduced a ban. Emigration went underground. At first Tangier, then the Spanish territories of Ceuta and Melilla became important staging posts.

Migrants headed for Gibraltar on commercial lines and then boarded Jewish Agency ships bound for Israel. They were not told when they would be leaving, only the time and place where a vehicle would pick them up. They were given false papers. The smuggling was timed to coincide with pilgrimages to saints’ tombs or Christian celebrations. The police were bribed at exit points. The migrants ran the risk of being arrested and tortured.

Jews continued to leave in secret until the Egoz (Pisces) disaster  in January 1961.  The ship was about to do its 13th illegal crossing to Gibraltar. All 42 on board were drowned including the Spanish machine operator. The captain saved himself. The tragedy caused the immigration ban to be lifted.

Between 1961 and 1964, nearly 100,000 Jews left Morocco as part of Operation Yachin, an effort conducted by the Mossad following an agreement between David Ben-Gurion and King Hassan II, whereby the Moroccan government received payment for every Jewish émigré.

Aliyah from the Middle East

In 1942, Aliyah Bet began to send emissaries to Iraq, Syria, Iran and Lebanon. About 9,000 Jews, including 1,300 Syrian Jews, were escorted in daring and complex operations overland to Mandatory Palestine. Rachel Yanait Ben-Zvi, wife of  Israel’s second president, Yitzhak Ben-Zvi, made it a priority to bring teenage girls from Syria. By 1945, 1,000 young people had made the journey.

Nissim Arkeli gives a graphic description of his escape:

“…the Arab border smugglers sat us on horses and instead of saddles, we sat on several sacks. The road which wound through mountains and hidden wadis was difficult and taxing, with the ever-present life- threatening danger  of falling from the horses and breaking one’s neck on the rocks. We very quickly developed calluses on our bottoms and thighs. By the second night the calluses had become very painful, bloody wounds.”

In November 1947, conditions became critical for Syrian Jews. Riots broke out in Aleppo resulting in most of the population fleeing. Thousands went from Syria to Lebanon, the only Arab country to see its Jewish population increase during this period.

The first illegal immigrants to Mandate Palestine from Iraq arrived on their own after the 1941 massacre known as the Farhud, primarily through Transjordan, a route 1,500 kilometers long. Some walked all the way. The shortest and quickest route was along the oil pipeline. Bedouin smugglers, taxi drivers, even officials of the Royal Jordanian Court acted as guides. The Iraqis and the British tried to thwart Aliyah with military inspections. Migrants could be imprisoned and interrogated.

Avner Shashua was detained when he tried to escape:

“One evening we were called to leave. Bedouin clothes were prepared for us: abayas, akals and keffiyas… we got into the waiting car  with the driver/smuggler… at one of the curves in the road the police were waiting for us… the smuggler was in cahoots with the police. We were taken to a detention centre. We had no beds, no mattresses and no blankets; we grabbed a corner and sat on the floor.”

The Mossad preferred a route through Syria from Mosul to Qamlishi, Aleppo, Damascus or Beirut. From 1943 to 1946, about 5,000 of the 7,500 immigrants from Iraq were smuggled in twos or threes across Israel’s northern border.  Many returned to Iraq, finding it difficult to adjust to their new environment.

Emigration was stagnating by 1947. The Zionist movement in Iraq had 2,000 members, but only 50 had made it to Israel.

Shlomo Hillel was increasingly frustrated. He was a 23-year old Mossad LeAliyah Bet agent who had moved to Israel from Iraq. Operation Michaelberg was conceived when he learned of two veteran American pilots with an itch for adventure and empty pockets who had offered their services.

They flew a C-46 plane to Baghdad with Hillel aboard. The plan was for 50 immigrants to be transported in ten cars past an Iraqi military camp and then climb through a breach in the airport fence. The plane almost took off without the passengers of the tenth car –  but it arrived just in time.

The plan worked perfectly. They landed in a field in the Galilee. A Mossad agent handed the pilots a briefcase of cash. The Haganah ran the operation one more time, bringing back 50 more Iraqis before the outbreak of war made the operation too risky.

In 1948, Iraq declared war on Israel and ramped up persecution of its Jews. Illegal immigration surged through the south and over the border into Iran. Soon it was running at 1,000 a month. The situation became so embarrassing for the Iraqi government that it decided to allow  emigration for one year only, thinking only hotheads and undesirables would want to leave. As it turned out, 120,000 Jews registered to go.

Shlomo Hillel went back to Iraq to negotiate the airlift. It became known as Operation Babylon or Operation Ezra and Nehemiah.

In 1949, Israel made a deal with Alaskan Airways to transport Yemenite Jews from  the British colony of Aden at the tip of the Arabian Peninsula.

The Yemenite Jews were in a desperate state. Many had walked through the desert to the Hashad transit camp in Aden. Hundreds died of malnutrition or disease. Ultimately 50,000 Jews were airlifted to Israel during 1949-50 – almost the entire community.

Throughout the 1950s, 1960s and into the 1990s, the Mossad continued to run clandestine operations– from Morocco, Egypt, Tunisia, Syria, Iraq and Iran. They saved thousands of Ethiopian Jews in the 1980s and 1990s, bringing them to Israel.

With the arrival of the C-46 plane at the Atlit museum, and the inauguration of a  dedicated hall, in some small way clandestine Sephardi immigration takes up its rightful place in Israel’s history. The brave souls who risked their lives to rescue and be rescued from Muslim countries are being remembered after being largely overlooked for so many years.