When Shimon Peres Fantasized of an Israeli Colony in South America

In the late 1950s, relations between Israel and France were blossoming, thanks in large part to the young Director General of the Ministry of Defense, Shimon Peres. Among various collaborations, Peres raised an unusual idea: Why not settle tens of thousands of Israelis in French Guiana, a remote South American colony? Who was in favor? Who wasn't? And what did David Ben-Gurion think of it? 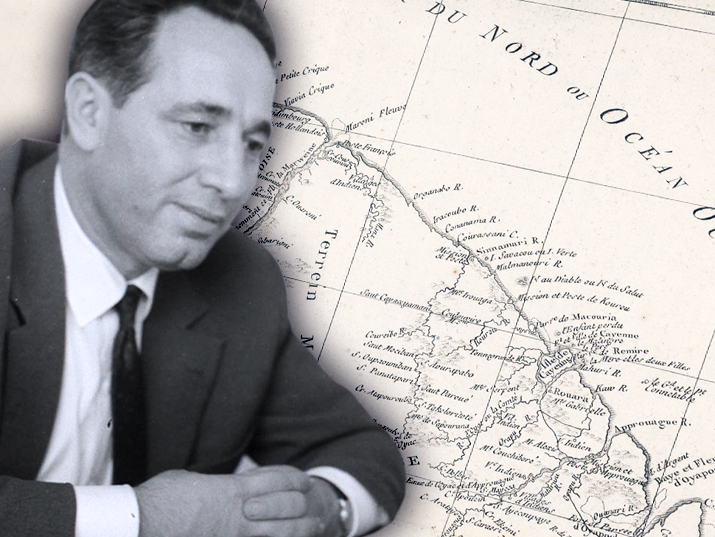 Is it hot outside? Are temperatures soaring? In Israel, this description fits roughly nine months of the year. But what if the government were to give you give a plane ticket and an offer to live in a more tropical climate? Would you take it?  And what if the specific location being suggested was the territory in South America known as French Guiana? Because, for a moment in Israeli history, the possibility that a group of Israelis might move there permanently was seriously considered.

But before we delve more deeply into that story, here is some general background information for your convenience: French Guiana is situated in the northeastern part of the South American continent, on the Atlantic coast, most of which is covered by dense rainforest. Next to it, in the general region known as “The Guianas”, are the Co-operative Republic of Guyana (formerly British Guiana), the Republic of Suriname (formerly Dutch Guiana), as well as certain provinces in southern Venezuela and northern Brazil. Unlike Guyana and Suriname, both of which are independent countries, French Guiana is, as its name suggests, a French overseas territory, which still belongs to France and whose residents vote in French elections. And yes, it is part of the European Union and the local currency is the Euro. For years, French Guiana served as a French penal colony. Off its coast is Devil’s Island, where Alfred Dreyfus was famously imprisoned until his exoneration on charges of espionage. Today, French Guiana serves as the main launch site of the European Space Agency, from where it launches its satellites and other space-related missions.

And what do Israel and this distant land across the Atlantic Ocean have to do with each other? The connection was the brainchild of Shimon Peres, who was the energetic young Director General of the Ministry of Defense back in 1959. Peres had been the driver, architect and maintainer of the strategic alliance between Israel and France since 1955. Guiana, as noted, was and is still part of France. “Among the French delegations that came to Israel there was a representative from Guiana,” writes Michael Bar-Zohar, in his acclaimed biography of Peres. “The representative from Guiana was deeply impressed by Israel and said to Peres, ‘If we had ties with Israel instead of France, our situation would be different’,” writes Bar-Zohar.

When Shimon Peres heard about this remote and underpopulated land of vast jungles replete with as yet undiscovered treasures, he decided that this was the perfect place to demonstrate the wonders of the Jewish mind and what it could accomplish. He turned to his friend Jacques Soustelle who was the French Minister of the Colonies. “Do you need Guiana?” he asked. Peres proposed that Israel lease the colony for a period of 30 to 40 years and relocate tens of thousands of Jews there who would help develop the region. Alternatively, Peres sought to establish a joint company with France for the development of Guiana, which the Israeli envoys would work on behalf of. Peres wasn’t just dreaming; he wanted Israel to have a stake in Europe’s Common Market, established two years earlier, of which Guiana was a part.

When Soustelle didn’t reject the idea outright, Peres charged ahead. He persuaded Hillel Dan, a director of the Israeli construction and civil engineering company Solel Boneh and the Histadrut labor union, and they organized a seven-person mission to tour French Guiana. The delegation returned with a detailed report and even a short film that was made during their visit.

At the same time, Peres approached Israeli Prime Minister David Ben-Gurion, who didn’t stop the delegation in its tracks but wasn’t too enthusiastic about the idea either. “They’re dreaming of resettling a Jewish majority (say 40,000 Jews) and establishing a Hebrew state as an Israeli colony,” he wrote in his journal. “Won’t this be at Israel’s expense?” he wondered. “And who’s to say that the Jews in Guiana will want to remain connected to Israel? I advised Shimon not to go too far in his talks with Soustelle, but instead to speak about joint enterprises . . . when the members of the delegation return I will finally find out how desolate the land is and the truth about whether there is room for settlement.”

This was in fact not the first time the idea of settling Jews in the region had come up. In the 17th century, Sephardi Jews arrived from the Netherlands and established a community called Jodensavanne (“Jewish Savanna”) in the area that is today Suriname. In 1939, (after the Arab Revolt ended and the year the final White Paper was issued) the idea was raised to settle Jews in British Guiana instead of Palestine. After World War II there were also calls to settle the Jews of Europe in French Guiana or the surrounding region, because of the difficulties involved in settling all of the refugees in Palestine.

Returning to our story, unfortunately, we were unable to locate either the report or the film of the delegation from their tour in French Guiana. If any readers have any information about these, we would love to hear from you. However, according to the evidence, the film was shown to members of the Israeli government and the reactions were harsh. Pinchas Sapir told Peres, “This is a disaster, colonialism, imperialism, it will cause a Holocaust in Africa and resistance in South America. Golda won’t let this happen, over her dead body. The ‘Old Man’ [Ben-Gurion] assured her that as long as she is Foreign Minister, this matter will not come to pass.”

Ben-Gurion was also convinced that one state was enough for the Jews. Although Peres accepted the Prime Minister’s decision, it seems that he carried the feeling of a missed opportunity with him for some time. “The French were ready to give us Guiana,” Michael Bar Zohar quotes Peres as saying in his book, adding that “in his diary, on various occasions, he recorded the benefits Israel could have reaped if only it had Guiana in its hands.”

What do you think? Would it have been a good idea if Israel had established a colony in South America? What would have happened if the idea had come to pass? Could this at least be a springboard for an alternative-history/fantasy book series? Let us know!