The Suicide of the Man Who Loved David Ben-Gurion

“My life’s work has been to serve you”: The tragic death of Nehemiah Argov, David Ben-Gurion’s trusted aide… 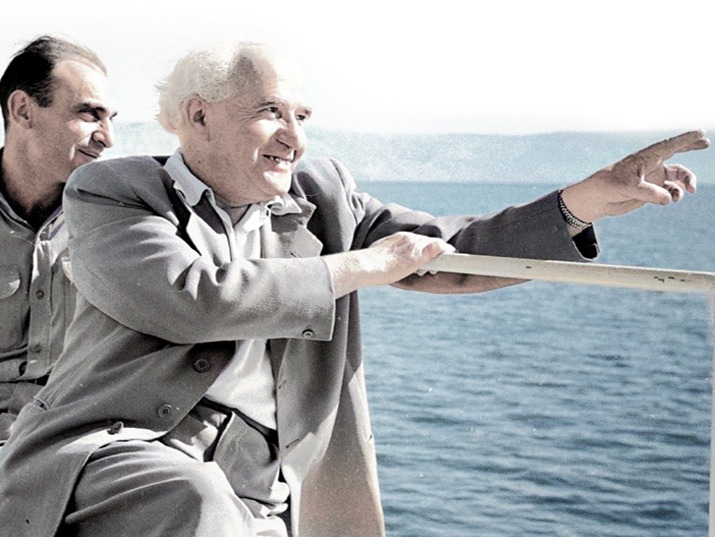 David Ben-Gurion and his military secretary, Nehemiah Argov. This image is part of Archive Network Israel and is made available through the collaboration of the Ben-Gurion Archive, the Ministry of Jerusalem and Heritage and the National Library of Israel

My life’s work has been to serve you.

I believe with complete faith that the Jewish people would not have achieved independence, nor would it have reached its position in the world without your amazing character.”

So ends our story.

And so began the farewell letter written by Nehemiah Argov, David Ben-Gurion’s military secretary, to the man he admired. The letter is dated November 2, 1957, but several days would go by before Ben-Gurion would read the letter addressed to him.

Let’s rewind a bit. Our story begins four days earlier, on October 29, 1957. On that day, Moshe Dweck, suffering from a mental illness, tossed a hand grenade from the stands into the plenum of the Knesset, Israel’s parliament, which was then at Frumin House on King George Street in Jerusalem. Four ministers were injured in the incident, as well as Prime Minister David Ben-Gurion who was hit by shrapnel and rushed to Hadassah Hospital in Jerusalem.

Although Ben-Gurion was only slightly wounded, his loyal military secretary Nehemiah Argov was very worried by the “Old Man’s” condition, and for several days did not leave the Prime Minister’s bedside. And so he wrote in a letter to a friend:

“The ‘Old Man’ will remain in the hospital for a few more days, with injuries to his leg and hand. The shrapnel from his leg will only be removed tomorrow. He is in good condition, and there are no concerns. However, it is hard to see this lion lying in bed . . . this lion’s place is not in a hospital bed!”

Four days after the grenade attack on the Knesset, on Saturday, November 2, Argov was driving from Tel Aviv to Jerusalem to visit the “Old Man,” when he was distracted for an instant, losing control of the wheel and hitting a cyclist named David Kadosh. He placed the injured man in his car and sped to the hospital. Doctors initially feared that Kadosh would not survive the accident.

Argov was broken by the event and felt that he could not live with his actions. Believing that it was his fault that a life had been taken, he chose to end his own with a gunshot to his temple. He left two letters behind. One letter to his friends and family, and one letter to David Ben-Gurion.

In the letter to his friends he wrote:

“Today, the car I was driving from Tel Aviv to Jerusalem hit the cyclist David Kadosh. I am afraid that he won’t make it. David Kadosh has a wife and four children. I cannot forgive myself for the injury I have caused to this family. Even if David Kadosh does survive, who knows if he will be able to continue to care for his sacred family?”

In the letter he asked to leave his money to the victim of the accident and at the end he wrote:

“I imagine I have some friends who will be sorry for what I am going to do. I beg them not to be angry with me for doing what I did. I am not worthy of being mourned.”

In his farewell to Ben-Gurion, he wrote:

He signed the letter “Your loving admirer, Nehemiah.”

But Ben-Gurion did not read the letter on November 2. Nor the next day either.

The doctors at Hadassah feared that the news of Argov’s death would worsen Ben-Gurion’s condition, as the Prime Minister was still recovering from the events of the grenade incident.

In an unprecedented move, the daily Israeli newspapers did something that had never been done before: they printed several special issues of their respective papers without the report of Argov’s death. The censored copies were brought to Hadassah hospital, and David Ben-Gurion, who would read the newspapers every day, remained in the dark about the tragedy.

We tried our best to locate the special issues at the National Library of Israel and in the archives of the daily newspapers, but unfortunately no copies were preserved.

Ben-Gurion was given the difficult news the next day. As expected, he was shocked and heartbroken. Two weeks later, on the speaker’s podium in the Knesset, he said:

“The thing that set Nehemiah apart is that he had one exceptional quality, and that is devotion and loyalty. Nehemiah was a man of the highest dedication . . . Nehemiah was endowed with a precious and rare gift from God—the great gift of love. This was a flame that burned in Nehemiah continuously and by which he was consumed, with love and agony.

Please permit me to stand here alone, in silence, for a short moment in his memory.”

The cyclist David Kadosh, the victim of the accident, eventually made a complete recovery. With the weight of Argov’s suicide on his shoulders, he also sent a letter to David Ben-Gurion, written from his hospital bed:

“Forgive me and accept my condolences for the great tragedy that has taken your great aide from you, the noble, honest and gentle soul, the late Nehemiah Argov.”