“Jews Shooting Jews”: A Look Back at the Days of the Altalena Affair

Home > History of Israel > “Jews Shooting Jews”: A Look Back at the Days of the Altalena Affair
Land of Israel 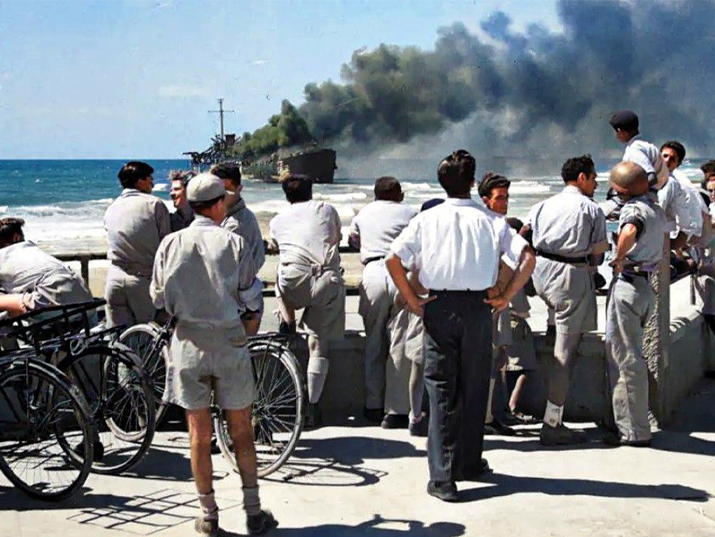 Soldiers and civilians looking on as the Altalena burns off the coast of Tel Aviv. Photo: GPO

“An arms ship that has arrived at the country’s shores has been seized by Irgun forces. The government of the State of Israel has come to a unanimous decision and ordered the Israel Defense Forces to use all measures to transfer the weapons to government custody.”

In June 1948, mere weeks after the State of Israel declared its independence, the above message was printed in Hebrew on flyers handed out across Tel Aviv. The Altalena, a ship carrying new immigrants, Irgun fighters, and a huge cache of weapons was docked off the coast of Tel Aviv. The Israeli government perceived its arrival as a threat to its own authority. The bitter finale of this episode is well known: After the parties failed to reach an agreement, the Altalena was sunk, and some would say the affair remains an open wound to this day. Yet the events that unfolded in the dramatic days between the Altalena’s arrival and its sinking are less familiar to the public, and they reveal quite a bit about the state of affairs in the young nation.

The Altalena set sail for Israel following a long delay and without informing Menachem Begin, the commander of the Irgun in Israel. “The Irgun” was the common term used in English to refer to the group known in Hebrew as HaIrgun HaZvai HaLeumi Be’Eretz Yisrael (“The National Military Organization in the Land of Israel”), or in short, Ha’Etzel. The Irgun had fought against both the British and the Arabs as a radical right-wing underground group in the pre-state period. In June 1948 it was no longer underground, but had yet to fully merge with the IDF.

The ship was supposed to have left in May, before the Irgun signed an agreement to disarm and prior to the UN-led ceasefire and international arms embargo coming into effect. Unable to stop the ship from setting sail, Begin took it upon himself to mediate the situation, but he did not have much success. Ben-Gurion and the Israeli government commanded the Altalena to anchor off the deserted coast of Kfar Vitkin, north of Tel Aviv, where it was to evacuate its passengers and hand over its weapons. This was where the first confrontation took place. The ship’s crew began unloading the supplies, passengers and fighters, while the IDF encircled the beach. Shortly after, Irgun forces attempted to break through the barricades, leading to an exchange of fire that left four Irgun members and two IDF soldiers dead.

After the battle, many Irgun members (including Begin) returned to the Altalena, which then retreated out to sea. At the same time, another battle took place at Beit Dagan between the IDF and members of the Irgun. In this case, there were even some former Irgun members, already serving in the IDF, who defected from the army to come to the aid of their comrades after hearing rumors of the events involving the ship and the ensuing battle.

After fleeing out to sea, those aboard the Altalena decided to head toward Tel Aviv, the ship’s original destination. The choice was no accident: the young city was considered a sympathetic stronghold of the Irgun (contrary to its current image), and the landing of a Hebrew arms ship at Israel’s largest and central city would have gained the Irgun fame and public support in the event of another confrontation. The Irgun also planned to send some of the weapons to its fighters battling for the liberation of Jerusalem, in the hope of securing the Holy City and the Temple Mount.

The Israeli Navy sent two frigates to stop the Altalena from reaching the shores of Tel Aviv, but Captain Monroe (Emanuel) Fein, an experienced former commander of a US naval ship, managed to evade them. The exchange of fire that followed didn’t do much damage either. Later, it was decided to run the Altalena aground, about 100 meters from shore in order to convey a clear message: a ship that has run aground does not engage in rebellion. However, those on the opposite side saw things differently. The Palmach headquarters was located in the beachfront Ritz Hotel and the Altalena was anchored directly across from it. The army commanders feared that Irgun supporters would again rush to support those stranded on the ship, as had happened at Kfar Vitkin and Beit Dagan. Given the lack of communication and understanding between the IDF and the Irgun, Ben-Gurion believed that a real coup attempt was underway which could undermine the state’s authority and establish a competing military force.

The Curfew: The Kiryati Brigade Closes Off the First Hebrew City

With the Altalena anchored in Tel Aviv, the government held an urgent meeting and imposed a curfew on the city. Forces from the Kiryati Brigade put up roadblocks and evacuated civilians from all areas near the coastline. Cafés were closed by military order. Fearing that civilian government institutions and military headquarters in Tel Aviv would become targets, the Kiryati Brigade commander Michael Ben-Gal (Rabinovitch) issued a general order for the immediate recruitment of “all forces in the defense zone of Tel Aviv … in order to block all traffic along known routes, with the exception of persons carrying security ID, supply vehicles and our army units.” Yitzhak Rabin, arriving at the scene by chance, took command. The Altalena sent a small boat ashore in another attempt at negotiation, but this too was unsuccessful.

Still clinging to the hope of unloading the weapons on the shores of Tel Aviv, the Altalena decided to send yet another boat, this time with fighters and weapons, to put pressure on Israel’s leadership. Meanwhile, many Irgun members reached the shores of Tel Aviv and managed to capture part of the nearby beach strip, even taking control of Navy headquarters at the San Remo Hotel. Ben-Gurion authorized his commanders to use harsh measures, and to open fire if necessary. The Irgun’s arms boat, loaded with light weapons, machine guns and PIAT anti-tank launchers managed to reach shore. It then set out for another round, returning with more forces, and unloaded them about 300 meters north of the ship while coming under fire. Some of the newly arrived Irgun fighters stationed themselves at the Panorama Café on HaYarkon Street and laid siege to the Palmach headquarters.

In his memoirs, Rabin described the next hours with an expression that became synonymous with the whole affair: “Jews shooting Jews.” Heavy gunfire was exchanged between the respective forces on shore, while the Altalena also opened fire and was targeted in turn, suffering casualties. After the Irgun forces fired a PIAT shell at Palmach headquarters, the commanders – led by Rabin – decided to act before the building was breached, throwing grenades from the roof at the Irgun forces and badly injuring many. A lull in the fighting enabled them to remove the injured and regroup. Residents of Tel Aviv took to the streets in the hope that the fighting had ended; however, this was not the case. The Palmach commander, Yigal Alon, arrived at the scene and established a command post at Camp Yona (today the Hilton Hotel gardens). After many soldiers refused to cooperate with Alon’s operation, codenamed “Purge,” the Carmeli, Negev and Yiftach Brigades were called in for backup and to enforce the curfew. All the while, along the beach there was an exchange of fire with Irgun members who came to support their comrades from the Altalena.

Alon issued an ultimatum demanding (again) the Altalena’s unconditional surrender. After the ultimatum expired, Ben-Gurion ordered Alon to begin firing mortars. The second shell hit a ship storeroom that immediately ignited, and the Altalena began to burn. Years of tension and anger had built-up over the years between the Irgun and its rivals in the Haganah and the Palmach – now they were exchanging live fire. Rabin and other commanders testified that they tried to prevent the shooting, but were unsuccessful. Many Irgun members jumped from the burning ship. Palmach and IDF forces were only able to retake control of the shore toward evening. About 19 people in all were killed and many were injured. The incident was a scarring experience for the young State of Israel.

A closer look at the events of the Altalena affair in Tel Aviv and the battles in Kfar Vitkin and Beit Dagan offer a more complex perspective on this historical episode. The ambivalence and lack of communication among the forces, the panic in Tel Aviv and the curfew enforced on the city tell the story of a young country facing a predicament that hit upon all of its exposed nerves, at a time when it was still engaged in an even greater war. The Altalena’s conduct while anchored on Israel’s shores presents the Irgun as an organization attempting, unsuccessfully, to maintain its power in a changing reality, in which it suddenly had become a foreign force within a newly-established state. While the Haganah and Palmach managed to retain their weapons even after signing agreements with the government, the delay in the Altalena‘s departure prevented the Irgun from doing the same.

In retrospect, one can assume that the Irgun was motivated by a desire to hold on to its prestige and power within the process of integration into the IDF. The entire chain of events, from the ship’s late departure to the lack of coordination between Begin and his men aboard ship, led the Israeli government to fear a rebellion. The government and Ben-Gurion refused to compromise on what they perceived as an undermining of the authority of the state and this fear led them to act harshly. It is impossible to know what would have happened if the Irgun members had chosen to accept the government’s demands and disarm, just as it is impossible to assess what would have happened if the state had authorized the Irgun to unload its weapons and equip its people already serving in the IDF and in Jerusalem.