In 1947, Britain was still holding tens of thousands of Jewish immigrants in camps in Cyprus, many of them Holocaust survivors. The children of the Yishuv joined in the aid effort, donating their pocket money and clothing so that the displaced children could stay warm in the cold winter months. 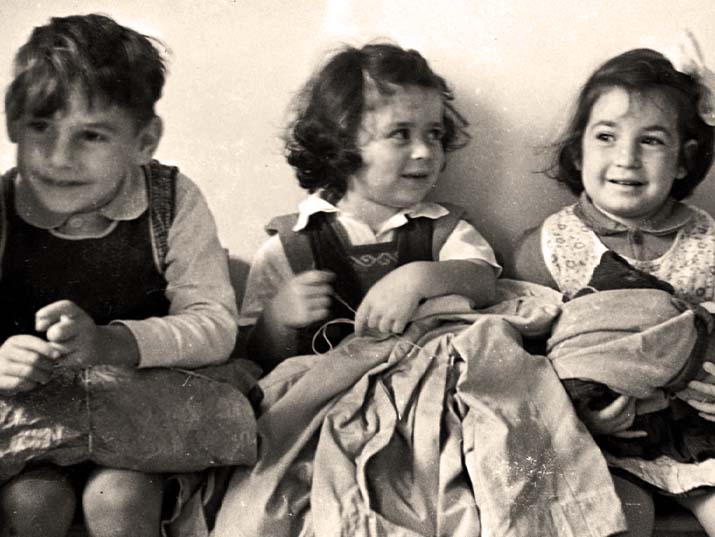 Ships packed with refugees make their way to the shores. The authorities do their best to locate and capture the boats before they anchor. The intelligence services collect information about the movement of the illegal immigrants. Coast Guard destroyers try to block the rickety and overloaded vessels. When a boat is captured, the passengers on board are sent to detention camps…

Though the above could easily be a description of recent migrant crises in the Mediterranean, it actually refers to the period of Jewish immigration to the Land Israel after the conclusion of World War II and the Holocaust. The British directed considerable resources to counter unauthorized, illegal immigration during this period, an enterprise that the Jewish community in Mandatory Palestine worked hard to renew after World War II. The goal was to bring as many Jewish survivors as possible to the Land of Israel.

Once a ship had been captured, the passengers on board were sent to detention camps in Cyprus set up by the British. These camps operated from 1946 to the beginning of 1949—that is, they continued to operate even after the establishment of the State of Israel.

Many Holocaust survivors—men, women and children—found themselves among the detainees in Cyprus. Some had already survived the concentration camps and then lived in DP camps in Europe. These homeless refugees took incredible risks to reach the place that promised to be their homeland, and instead of a refuge, they found themselves once more surrounded by barbed wire fences. The conditions in the camps in Cyprus were not easy and while the British took care to provide basic food and services, both were insufficient.

The Jews already in the Land of Israel did not forget their fellow Jews in the detention camps.  After the establishment of the state, the struggle for the release of the detainees intensified, but even before, the Jewish Agency and other pre-state institutions had been working busily on their behalf. Hebrew language instruction was provided, all the underground movements sent representatives to recruit and train the camps’ residents, and in April 1948, an illustrious cultural delegation including poet Nathan Alterman and singer Shoshana Damari visited the camps.

The “Committee for the Cyprus Exiles” was the chief body set up by the Jewish Agency, the National Committee, and the JDC, to assist the detainees. The committee mainly collected donations—money, food packages and other items. Packages with the various items were sent regularly through the committee, which also organized deliveries of toys, books, newspapers, and tools. Before the holidays, they would send special foods and other necessities required for the holiday’s observance. The committee organized regular cultural activities in the camps and provided employment for the occupants, as well as many other activities designed to ease the lives of the refugees.

The committee also organized special fundraising campaigns. One of the largest was Operation “Winter Clothing”, which began in the fall of 1947, immediately after the committee had completed its work for the Jewish High Holy Days. This latest campaign was the third winter fundraising drive the committee had conducted. All the newspapers carried stories on the operation, whose goal was to provide blankets and clothing for about 50,000 refugees in detention camps in Cyprus, the DP camps in Europe, and also for refugees from the Aden riots in Yemen. Women’s organizations and youth movements mobilized for the two-week-long effort.

Hundreds of collection depots were set up in the larger cities for citizens to deposit clothes, blankets, food or other items. The announcements in the newspapers called on residents not to wait until the collectors came to their homes but instead to go the collection points with their donations. The Jewish community in Mandatory Palestine, whose own resources were quite limited, rallied to help its fellow Jews imprisoned abroad.

When the operation was over, the committee did not rest on its laurels, and immediately began a campaign to supply holiday necessities and matzah for Purim and Pesach.

Operation Winter Clothing was one of the largest and most successful of its kind at the time. And not only adults lent a hand, but so did the country’s children. In the photos accompanying this article you can see children bringing clothes to collection points. The local children’s newspapers also addressed the issue. An editorial in one of these newspapers called on its young readers to ponder the question: “As we prepare our own winter clothes here in Eretz Yisrael, we should ask ourselves: Do our brothers and sisters in Cyprus have what to wear?” The same children’s newspapers also regularly reported on children who chose to donate their birthday money to the children of Cyprus: one child donated one Palestine pound or lira, another gave three, and another donated 300 mil (1 Palestine pound = 1000 mil). In one case, an entire class collected money for the benefit of the displaced children.

The donations continued throughout 1948. The last of the detainees were finally released in the first months of 1949, a full nine months after the establishment of the State of Israel. Their release was only obtained after considerable Israeli efforts – the British had curiously insisted on holding onto the detainees, almost 4 years after the end of World War II. At last, the story of illegal Jewish immigration to the Land of Israel had come to an end

All the photographs in this article, and many more documenting Operation Winter Clothing in 1947 were taken by the photojournalist Benno Rothenberg and are now part of the Meitar Collection at the National Library of Israel.  Click on the link here to view them all.