How France Nearly Snatched Half of Jerusalem From Britain Over Lunch

If not for a crucial lunchtime intervention by General Edmund Allenby, who apparently had his mouth full, half of Jerusalem could have come under French control. In fact, had Allenby remained silent, there might never have been a British Mandate in Palestine, not to mention a State of Israel… 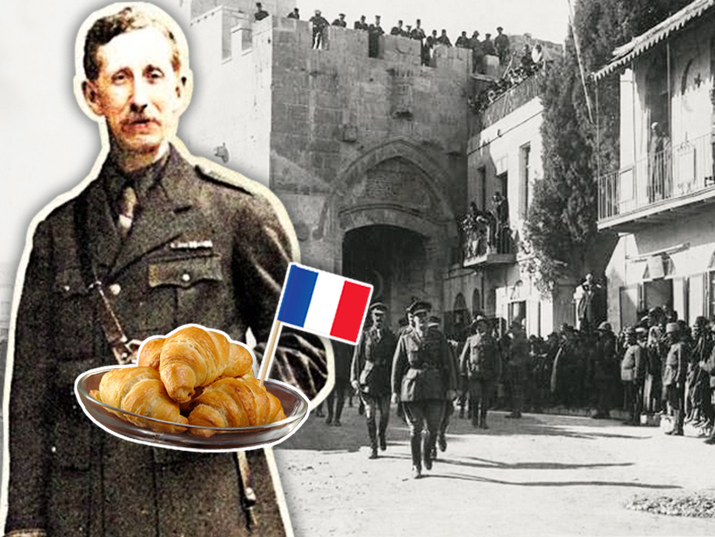 It could have all been very, very different, if things had actually gone to plan…

In late 1917, Thomas Edward Lawrence, better known as Lawrence of Arabia, received urgent orders. He was to immediately put aside his work in helping to stir up the Arab Revolt against the Ottoman Turks, and join General Edmund Allenby in Palestine.

It was the late stages of the Great War – within days Jerusalem would fall to the conquering British Army, after nearly three grueling years of fighting against the Ottomans and their Imperial German allies in the Sinai and Palestine Campaign.

This was a landmark event in history – the Holy City was changing hands. The international press, who had paid little attention to the Palestine Campaign until now, were caught up in the excitement. After all, General Allenby had succeeded where even Richard the Lionheart had failed.

Lawrence managed to secure an invitation to the highly anticipated handover ceremony on December 11. He was lacking the proper attire for such an event, needing to borrow a clean uniform and a brass hat, but he entered the Old City through Jaffa Gate, several steps behind Allenby who strode on foot as a mark of respect. Lawrence was present as the general announced to the dignitaries gathered in front of the Tower of David that the city was now officially under martial law. Though he wrote little else about the ceremony, Lawrence noted that, “for me it was the supreme moment of the war”.

In his classic book Seven Pillars of Wisdom, the Englishman did however elaborate further on a peculiar exchange that unfolded in the immediate aftermath of the ceremony, over a fairly impressive lunch (by military standards) in the quaint, nearby village of Ein Karem.

The aides pushed about, and from great baskets drew a lunch, varied, elaborate and succulent. On us fell a short space of quiet, to be shattered by Monsieur Picot, the French political representative […], who said in his fluting voice: ‘And tomorrow, my dear general. I will take the necessary steps to set up civil government in this town.’

[…] a silence followed, as when they opened the seventh seal in heaven. Salad, chicken mayonnaise and foie gras sandwiches hung in our wet mouths unmunched, while we turned to Allenby and gaped. Even he seemed for the moment at a loss. We began to fear that the idol might betray a frailty. But his face grew red: he swallowed, his chin coming forward (in the way we loved), whilst he said, grimly, ‘In the military zone the only authority is that of the Commander-in-Chief – myself.’

Picot protested further, but was cut short by Allenby, who made clear that the civil government would only be established when he saw fit.

It seems that François Georges-Picot was under the impression that France and Britain would share administrative authorities in Jerusalem, now that the city had fallen to the Allied Powers. Allenby was clearly having none of it.

It’s possible that the exchange was even worse than Lawrence described. Another eyewitness, a French officer by the name of Louis Massignon who was part of Picot’s delegation, later wrote that “Allenby threatened Picot harshly with arrest if he interfered”. The British general, nicknamed “The Bull”, stood 6 foot 2 and was known for his unpredictable temper and imposing appearance.

The truth was that Picot had a point. The French diplomat, along with his British counterpart Mark Sykes, had been one of the chief formulators of the famous “Sykes-Picot Agreement”.

According to the terms of this secret agreement signed in January 1916, Jerusalem and most of what had been Ottoman Palestine was to come under international administration with the conclusion of the war. Until then, according to Picot, all conquered sections of Palestine were meant to be ruled by a joint Anglo-French administration.

At this stage however, the British had other ideas. After all, they had fought and bled in this region for years. There were major setbacks along the way, including two military defeats at Gaza. They would suffer over 60,000 battle casualties with nearly 17,000 killed over the course of the campaign (it’s worth noting that much of the rank and file came from the far reaches of the British Empire, including India, South Africa, Australia and New Zealand). The French contribution in Palestine was minimal in comparison. The British had no intention of now ceding control of the great prize because of a confidential agreement that was not even public knowledge.

The brief and rather informal diplomatic tussle described above by Lawrence may very well have changed the course of Middle Eastern history. What would an Anglo-French Jerusalem have looked like? One can only imagine…

If not for General Allenby’s verbal resistance, raised as he chewed on his fois gras sandwich, there might never have been a British Mandate in Palestine. If an international administration had indeed been established in Palestine as per the terms of the Sykes-Picot Agreement, would the State of Israel have ever come into existence? Arguably not.

The name of Edmund Allenby (who was later raised to the rank of Field Marshal and given the title “Viscount of Megiddo and of Felixstowe in the County of Suffolk”) today graces countless streets, bridges, parks and city squares across Israel. These honors celebrate the officer’s considerable military exploits, but his lunchtime stand against French intervention may have been just as crucial.

The Fantasy of an International Jerusalem, by Martin Kramer, Mosaic Magazine, 2017