Not long before becoming the world's most famous hairstylist and building a business empire, Sassoon fought for Israeli independence. He lost friends, gained confidence, went weeks without a shower, and literally never learned the Hebrew word for 'retreat'... 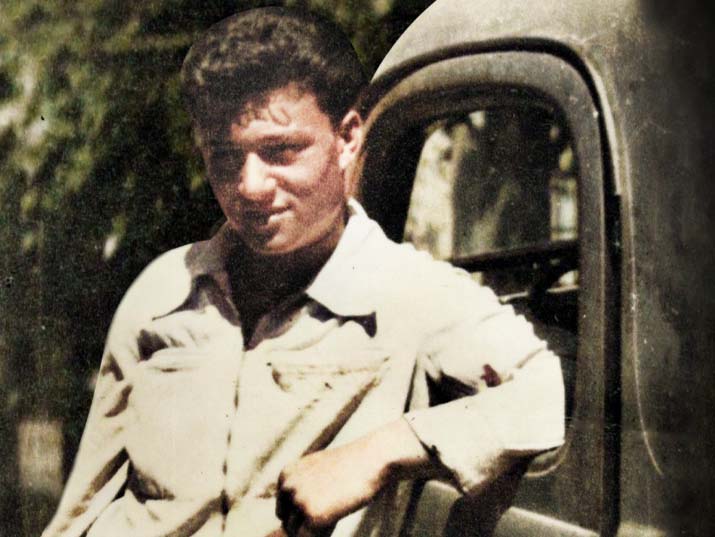 A well-coifed Vidal Sassoon poses for a photo while in Israel, 1948 (Original photo: Toldot Yisrael via the Sassoon Family / Colorization: MyHeritage)

“As I left the hall, I knew that I would not be cutting hair for quite some time.”

April 1948. Vidal Sassoon, a poor 20-year-old Jew who had been learning how to cut women’s hair by day and literally fighting fascists on the streets of London by night, had just been clandestinely recruited to battle for Israel’s independence.

He would soon find himself in Paris and then aboard a dodgy Dakota aircraft, eventually landing outside Haifa after stops in Rome and Athens. Grouped with other English-speaking volunteers in the Palmach, the elite combat force that would later be integrated into the Israel Defense Forces, Vidal and his comrades were sent to the Negev where they lived in stark huts and went weeks without changing clothes or showering, let alone doing their hair.

Like many other foreign volunteers, Vidal’s Hebrew was sparse.

In a rare 2010 interview conducted as part of Toldot Yisrael, an oral history project focused on Israel’s founding generation, he recalled:

“They never taught us the word ‘retreat’ in Hebrew.”

“All orders were given in Hebrew, which none of us understood, though we soon learned the hard way to recognize the sounds,” he elaborated in his first memoir, Sorry I Kept You Waiting, Madam. In fact, the gap in his linguistic knowledge almost got Sassoon killed when an Egyptian armored car sped towards him, “blazing away with its machine gun,” its bullets “tickling the sand all around us”:

“… nobody had told us how to say ‘Run like mad’ in that ancient tongue. Maybe they thought we would never hear it…”

Sassoon and his friends scurried up the nearest hill, racing for cover alongside their sabra brothers-in-arms. One of the faster soldiers, Sassoon would have caught up without any issue, if not for an unexpected and embarrassing turn of events…

“I would have made it easily, had I not been hit – by a very personal crisis. My belt burst!

…My plants flopped around my ankles. I fell flat on my face. By the time I got the sand out of my mouth and my pants at the correct military level, my comrades were fifty yards ahead, scrambling up that hill in a cloud of dust. Sten gun in one hand, decency held high with the other, I took off after them…”

In a later memoir, Vidal: The Autobiography, Sassoon recounted:

“News of my exploit got around, and for about a month soldiers that I didn’t even know would look at me and start laughing. The embarrassment stayed with me, but there’s no doubt it was a memorable lesson in self-preservation…”

Yet the war was, of course, not all fun and games.

Sassoon and 41 fellow soldiers took a strategic hill from Egyptian forces in a daring early morning assault, the success of which he called “a bloody miracle” – and one which cost a heavy price. Seven soldiers were killed taking “Hill 18”, while numerous other left the battlefield on stretchers.

“I wasn’t touched. I was also one of the lucky ones. But the casualties were very high,” he later recalled of his service fighting in and around the Gaza Strip as part of the strategically imperative Operation Yoav.

The soon-to-be legendary hairdresser’s most harrowing experiences during the war was seeing one of his friends get killed as he ran towards Vidal with some rations.

“Half his head came away. A sniper caught him. I think it’s the only time that I really got out of sorts… I went to the end of the trench and just vomited,” he recounted in the 2010 interview.

Vidal remembered the first shower he took on a kibbutz after leaving the battlefield quite vividly, calling it “one of the greatest luxuries I have ever known.”

“The water cascaded down on us, streaking away the filth of days and washing away some of the grimmer memories, too.”

Though somewhat striking in contrast, perhaps it’s no wonder that the name “Vidal Sassoon” would become synonymous with ubiquitous shower-centric commercials, soaps, shampoos and other products.

“I came back from Israel with so much more confidence… It gave me the inspiration to go on and do other things,” he recalled in his Toldot Yisrael interview.

Within just a few short years of his “luxurious” shower in the Negev, the poor Jewish kid from London became the world’s most famous hairstylist, a universal symbol of popular culture, his name gracing salons, academies, and beauty products across the planet.

Already by the mid-1960s he was a global cultural icon, recognized and referenced even in faraway Israel. Israeli hairdressers would boast that their cuts were “like at Vidal’s”. Some of them had even gone to London to learn from the master himself, though most just went to his academies or simply mimicked the styles he created and popularized.

Yet it wasn’t until after the publication of his first memoir in 1968, and the expansion of his business empire in the years that followed, that Sassoon’s participation in Israel’s fight for independence became more widely known.

In 1970, David Carmeli, Sassoon’s commander in the Palmach who had since became a respected expert in water and agricultural engineering at the prestigious Technion, was flown to London to surprise Vidal on an episode of the show “This is Your Life”.

A few years later, Carmeli was brought to New York to speak at a special event celebrating the “first annual Beauty Hall of Fame award dinner of the American Jewish Congress” – an honor so specific that it seems to have been created solely for Vidal Sassoon, who was apparently the “annual” award’s only ever recipient.

For the rest of his life, Vidal Sassoon built an empire of style and philanthropy – vocally and financially supporting many Jewish and Zionist including the Hebrew University and its Vidal Sassoon International Center for the Study of Antisemitism. He believed that global antisemitism could only be defeated through education of the young and a “very powerful Israel which upholds the dignity of Jews everywhere.”

“Israel gave us dignity. Israel means our very life’s blood. We can’t have any race or people decide our destiny,” he said at a 1981 fashion show to raise money for Israel Bonds.

More than thirty years earlier, matters at home had required Vidal to leave Israel for London after his step-father had a heart attack and his beloved mother – who had encouraged him to go and fight – needed her son at home to help support her.

Shortly before Vidal returned to England, the fiancée of the man he had seen killed in action told him:

“This is your home, Vidal. This is your country. It’s not enough just to fight for it. That’s pointless, in fact, if you don’t stay to help build it.”

Many thanks to the Toldot Yisrael team for their assistance preparing this article. Their complete interview with Vidal Sassoon is available here. Toldot Yisrael is an initiative dedicated to documenting the testimonies of the State of Israel’s founding generation. The collection is now deposited at the National Library of Israel in Jerusalem.