When Nazi Swastikas Were Paraded in Downtown Tel Aviv 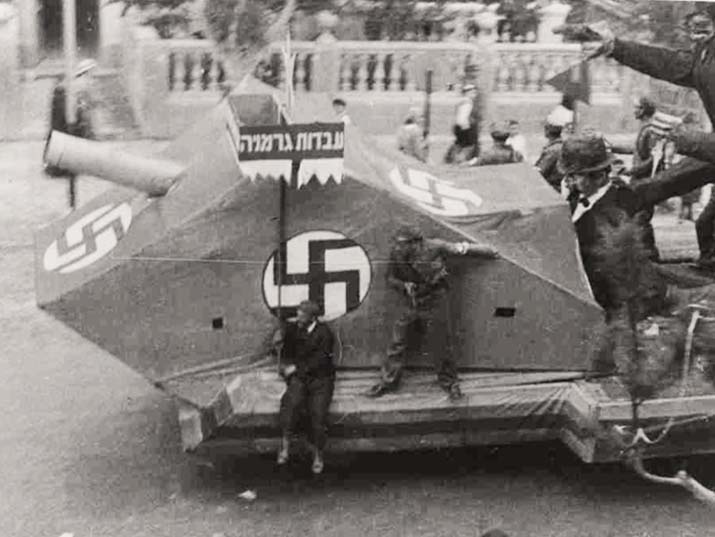 A mock-up of a canon, adorned with a swastika, and an effigy of a Nazi stormtrooper trampling a Jew, Tel Aviv, 1935. This photograph is part of the Israel Archive Network project (IAN) and is accessible thanks to the collaborative efforts of the Ben Zvi Institute, the Ministry of Jerusalem and Heritage and the National Library of Israel.

Adolf Hitler became Chancellor of Germany on January 30th, 1933. The clear and present danger to world Jewry was obvious to many, including here in what was then still Mandatory Palestine.

A month and a half later, on March 13th, Tel Aviv held its annual Purim parade, the “Adloyada”. Among the costumes, colorful displays and general revelry, one cry of protest stood out in the crowd.

This was an exhibit designed by a group of Jewish immigrants from the Caucasus region. It displayed Hitler on horseback, pursuing two Jews as they ran terrified before him. They appeared beaten and bruised. The exhibit was titled, “Hitler in Pursuit and the Land of Israel Remains Locked Shut”. A sign was hung on Hitler’s neck, reading “Death to All Jews”. We were unfortunately unable to find a photograph of this particular exhibit in the archives.

The German Consulate heard of the stunt and sent a sharp letter of rebuke to Tel Aviv Mayor Meir Dizengoff, written in English. The Consul was most perturbed:

“Besides being of opinion that the person of a leading statesman on such an occasion should never be made the object of presentation whatever the intention might have been, I find myself in the necessity to protest most urgently against the tendencious [sic] manner in which Herr Hitler was publicly represented in this special case…I sincerely hope that they will think it right to apologize.”

“It is clear that this display is nothing but a spontaneous reaction reflecting a public view that is unwilling to accept the fate of the Jews of Germany. In fact, one wonders why the protest was not even sharper…”

The truth is, there was room to doubt the “spontaneous” nature of the exhibit, as it had been pre-approved by the municipality, which even rewarded the designers with a cash prize.

By 1934, fear of the Nazis was even more grounded in reality. Hitler was consolidating his power, and anti-Jewish measures were on the rise. That year’s Purim parade in Tel Aviv was marked by full-on protests against the Nazis, featuring clear demands to boycott German goods and stand up to the National-Socialist party.

This time around, the main attraction was a massive three-headed, swastika-emblazoned dragon, with an effigy of Hitler mounted on its back.

At the end of the march, the “Antisemitism Dragon” was brought to Dizengoff Square and set on fire. A municipality newspaper, Yedioth Iriyat Tel Aviv, reported that “This was one of the most wonderful sights of the Purim celebrations, and the joyous bonfire-light dancing[…] lasted for many hours”.

By 1935, the gloves were off. The parade had now become a blatant anti-Nazi march through downtown Tel Aviv, purposefully aiming for maximum-shock effect.

One of the parade’s most shocking and prophetic displays was this one:

World War II would begin just a few years later. The fate of European Jewry would be worse than anything the Purim parade participants could have imagined.