Isaac Newton’s Map of the Apocalypse

Isaac Newton, who possessed one of the greatest scientific minds in human history, had some fascinating views on the End of Days. His vision even linked the apocalypse to the return of the Jews to their ancient homeland. 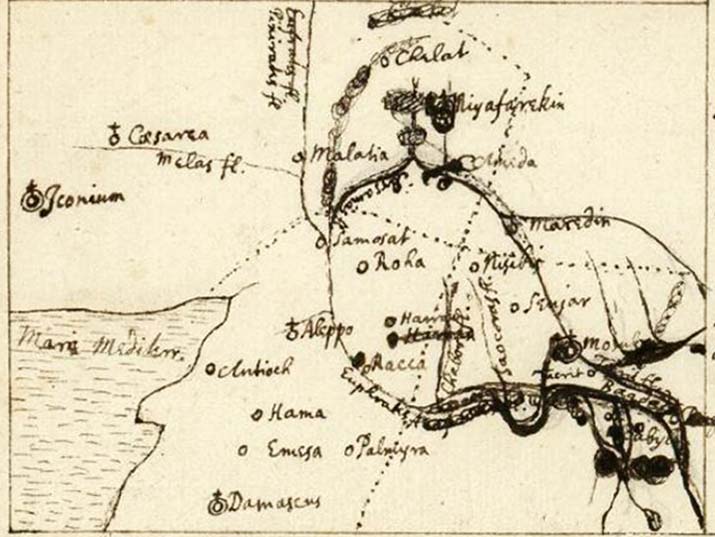 So then the mystery of this restitution of all things is to be found in all the Prophets: which makes me wonder with great admiration that so few Christians of our age can find it there. For they understand not that ye final return of ye Jews captivity & their conquering the nations (of ye four Monarchies) & setting up a peaceable righteous & flourishing Kingdom at ye day of judgment is this mystery.

—Isaac Newton, Of ye Day of Judgment & World to Come

How does one bridge the gap between science and faith? In 1795, the English poet and artist William Blake created one of his most iconic paintings. Its subject was the English physicist and mathematician Isaac Newton (1642–1727), one of the greatest scientists in all of history. Blake defined Newton as one of the fathers of rational thought. However, make no mistake, the painting was not complimentary of its subject. Blake painted Newton at the bottom of the ocean, immersed in measurements and calculations and ignoring the world around him.

The modern image of Newton is perhaps not so far from Blake’s somewhat mocking representation. After all, the first image that generally comes to mind when one mentions the name “Newton”, is that of a rationalist scientist so preoccupied with his theoretical musings that it took an apple dropping on to his head to bluntly remind him that there was indeed a real, tangible world to be contended with. In the popular imagination, Newton’s apple was responsible for sparking his mission to formulate the universe’s physical laws.

Despite this stigma, it seems that few, including Blake, were familiar with Newton’s mystical and esoteric writings. The collector Abraham Shalom Yahuda purchased these manuscripts in 1936, which were deposited, along with the rest of his collection, at the National Library of Israel in 1969. Many of the writings are digitally accessible through the Library’s website, and reveal a completely different side of Newton’s world.

In Jewish tradition, the End of Days is not generally a common topic of discussion or study. Indeed, the Day of Judgment is mentioned only briefly in some of the apocryphal books (ancient texts that were not included in the Bible), although over the course of Jewish history, the issue did occasionally surface during darker periods, which brought with them episodes of messianic revival. Nevertheless, the belief in the destruction of the existing world and the creation of a new one in its stead does not occupy a central place within Judaism. On the contrary, Jews are commanded to preserve the existing world. In Christianity, on the other hand, the apocalyptic vision in the New Testament describes the End of Days with chilling accuracy. The Book of Revelation (also called the Apocalypse of John), the last book of the New Testament, describes the exact geographic location where the final and decisive war in history, known as Armageddon, will take place. Apologies for the spoiler.

Newton believed in the unequivocal, divine origin of the Bible. He devoted his time not only to clarifying the laws of nature, but also to searching for the essence behind them. The scientific motivation to comprehend the world and explain it was also what pushed him to seek understanding of reality’s more esoteric secrets, as well as any religious meaning that lay behind them.

One of Newton’s main pursuits in this respect was calculating the exact time and location of the end of the world. Among the seemingly vague chapters of the Hebrew Bible and the New Testament, Newton sought accurate prophecies for the future of the world and the redemption of the human souls living in it. It is important to understand that at the time Newton formulated his great scientific theories, modern science had not yet completely abandoned the esoteric and religious sources from which it had developed.

Already in his early theological writings, Newton invested much interpretive energy in deciphering John’s apocalyptic revelation. Among other things, he hoped to discover the exact location where the events that would lead to the End of Days would begin. Not satisfied with theoretical research and written interpretation, the scientist even attached a map that indicates precisely the area expected to be the focus of the Day of Judgment to one of his essays on the subject. We will come back to this map, created some 300 years ago, and the many notes scribbled in its margins, which hold an abundance of multidisciplinary information.

John’s Revelation tells of the sounding of seven trumpets, each of which heralds a different apocalyptic event. Because Newton did not believe that the end of the world would come in his lifetime, he did not define the location of the seventh and final trumpet sounding. What he did mark on the map were the events leading up to the End of Days; that is, the sounding of the fifth and sixth trumpets (Revelation 9). Newton understood the fifth trumpet to be the rise of Arab Islam. And the sixth – the rise of the Ottoman Empire, which Newton believed was sent by God to punish sinful Christians and finally destroy the remnants of the corrupt Roman Empire, that is, the Byzantine Empire.

And where, according to Newton, do the end time events take place? Why, right here, in our own cozy little neighborhood known as the Middle East, where else? With great precision, Newton identified four provinces: Asia (the city of Konya, in modern day Turkey), Syria (the city of Damascus), Mosul (in Iraq), and Meyafarikîn (today the city of Silvan, also in modern Turkey). To each he assigned one of the four angels of the apocalypse liberated from the Euphrates River during the sixth trumpet event (Revelation 9: 14). According to John’s vision, the departure of the four angels of the apocalypse to sow destruction and devastation throughout the world precedes the coming of the mysterious beast—mentioned in the book as one of the initiators of doomsday—and symbolizes the final battle.

Given the starting point of the angels of the apocalypse according to Newton, one area stands out for its absence from his map. This is Mount Megiddo, which in the Greek translation became Armageddon, later taking root in Christian tradition as the name for the Judgment Day event itself. Megiddo is mentioned in the Bible several times, often in the context of an important battle (remember the story of Yael and Sisera? That happened nearby), but only in Christianity is it incorporated into the vision of the end of days. According to Revelation, the final battle between the forces of evil, led by the beast, and the forces of good commanded by God, will take place at Mount Megiddo. In this battle, the wicked will be defeated, after which the kingdom of heaven will reign over the earth.

Newton provides a historical example for the connection between the forces of evil and divine providence. In a note scribbled on the map’s margins, Newton discusses two military leaders of the forces of evil: one is Saladin (1138–1193), who expelled the last of the Crusaders from the Holy Land, and the other is Genghis Khan (1162–1227), whose Mongol hordes appeared from the East, and sowed destruction and devastation across much of the world. Newton perceived the rise of the two conquerors as the intervention of divine providence.

Newton’s manuscripts preserved at the National Library of Israel offer an intriguing glimpse into aspects not widely known about this venerated scientist, notably his interest in alchemy and his systematic attempt to recreate the divine prophecy that had been lost since biblical times; that is, to understand the prophecies handed down by the Hebrew prophets. Albert Einstein made the case for the significance of these documents clearly in a letter to his friend, the collector and Middle East expert Abraham Shalom Yahuda, in 1940. Einstein elucidated for Yahuda the importance of collecting and making Newton’s theological and alchemical writings available for study, emphasizing that these writings open an unprecedented window into the man’s work. Einstein wrote:

While the formative development of Newton’s lasting physics works must remain shrouded in darkness, because Newton apparently destroyed his preparatory works, we do have in this domain of his works on the Bible drafts and their repeated modification; these mostly unpublished writings therefore allow a highly interesting insight into the mental workshop of this unique thinker.

From the theological records preserved in the Library, it is clear that like a number of 17th-century Protestant commentators, Newton also believed that the end of the world was encrypted in the text of the Bible. The thousands of carefully hand-written pages are evidence of the devotion of one of human history’s greatest minds to the solving of this riddle. As hinted in the quotation which appears at the beginning of this article, the return of the Jews to Zion was a central part of the Newtonian vision.