The Forgotten Holidays of David Ben-Gurion

"Ingathering of the Exiles Day" - intended to make immigrant soldiers feel welcome - was one of a number of 'festivals' that helped form the national ethos... 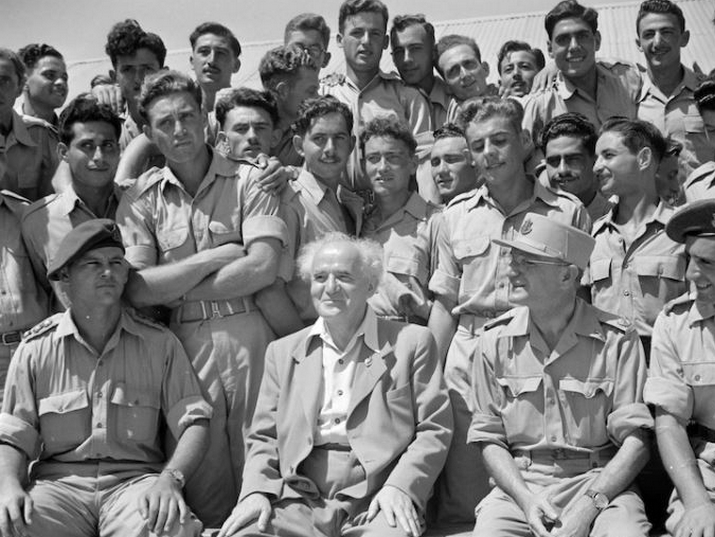 David Ben-Gurion with soldiers at Sarafend, 1949. Photo by Rudi Weissenstein, all rights reserved to Pri-Or PhotoHouse; part of the National Library of Israel Digital Collection

The State of Israel lacked many things during its first year of existence – peace and prosperity, food, economic stability, housing and basic infrastructure to name just a few.

National holidays, on the other hand, were plentiful!

Not holidays in the traditional celebratory sense; but rather holidays that were intentionally designed, declared and commemorated in order to achieve important national objectives under the complex circumstances and realities of the nascent Jewish state.

At the behest of David Ben-Gurion, these holidays were all imbued with deep symbolism – both timeless and timely.

Symbolically and literally, the holidays largely centered around the army, which was responsible not only for defense, but also for immigrant absorption, educating the masses and instilling Zionist values.

As Israel’s prime minister and minister of defense, Ben-Gurion directly oversaw and commanded the army, paying particular attention to its role as a tremendously formative player in the country’s society and culture.

During the very first temporary ceasefire during the 1948 war, just a month after the official establishment of the Israel Defense Forces (IDF), the first such holiday, “Swearing in Day”, was celebrated throughout the country’s military bases and beyond.

During the festival of Sukkot (the Feast of Tabernacles), the country celebrated “Settlement Day”, emphasizing the army’s role in helping to fulfill the Zionist mission and dream of settling the land.

Then, during Hanukkah, which took place at the end of December 1948 and into January 1949, “Ingathering of the Exiles Day” was celebrated, emphasizing the importance of another central Israeli value: immigration.

The day’s name is decidedly more natural in Hebrew: “Yom Kibbutz Galuyot” – a clear reference to traditional Jewish texts describing the almost magical messianic period in which Jews will finally return to the Land of the Israel from the four corners of the earth. In one famous line from the Talmud, for example, Rabbi Yochanan claims that the day of the ingathering of the exiles is even greater than the day on which the heavens and the earth were created (Pesachim 88).

In some ways, the massive immigration to Israel during that time was truly no less than miraculous. Some 100,000 new arrivals had come over the course of just a few months.

While the ideal of immigration was certainly an important value to emphasize and instill, the point of the day was also very practical.  The absorption of all of these immigrants was hardly going smoothly, especially in the army where successful absorption in the context of conflict could literally mean the difference between life and death.

With about a third of all combat soldiers in Israel’s War of Independence being fresh immigrants, their acceptance was critical to the success of the entire effort, yet in many cases those who had been born in Mandatory Palestine or had immigrated even just a few years prior looked down on the more recent immigrants in their midst.

They often had little empathy or compassion for the recently arrived Holocaust survivors, many of whom had actually enlisted while still in displaced persons camps in Europe. Immigrants from the Arab world were often considered inferior and barbaric due to the dramatic differences in culture and language.

Moreover, for diplomatic reasons Israel had largely refrained from emphasizing the fact that many of its soldiers had come from overseas.

By Hanukkah of that first year, the circumstances and needs were ripe for the new state and army to make efforts encouraging the acceptance and appreciation of its new immigrants, especially those fighting on the front.

“Ingathering of the Exiles Day” was largely born out of the realization of this need, and in fact, the immigrant soldiers were the focus of the holiday.

It was not incidentally scheduled to take place on Hanukkah, the most militarily heroic festival on the Jewish calendar.

“Ingathering of the Exiles Day” ceremonies and special events took place in communities across the country and were held on virtually every IDF base, as immigrant soldiers were invited to share their stories, and special materials were distributed in Hebrew, as well as their native languages.

At the official national ceremony, Ben-Gurion compared the diplomatic and military difficulties faced by the young country to the internal struggle of successful immigrant absorption.

The connection between the global Jewish people had never been stronger, he said, calling the immigrant soldiers, a “clear living manifestation” of that connection and pointing out that they had come from 50 countries across the world, from all ethnicities, tribes and socio-economic backgrounds.

“The connection between the nation and the Diaspora doesn’t recognize in our army distinctions between East and West. There are soldiers from the West, and there are from the East, Habash [Ethiopia], Burma, India and China. From East and from West all as one came to the army of liberation.”

Civilian institutions were also called upon to participate, with the goal of making every immigrant feel at home in their modern-ancient homeland.

At large ceremonies throughout the country, the nation’s leaders called upon the general public to invite immigrant soldiers to family Hanukkah parties, and – as possible – even to stay overnight in their homes.

This official IDF poster for the first “Ingathering of the Exiles Day”, conveys all of this spirit simply, yet powerfully:

Designed by artist Yohanan Simon, the poster depicts the new army and state as the center of gravity for Jews dispersed around the globe, featuring the words:

“And they will be brought to us from East to West, a great army to help the nation…”

Reverberating with prophetic Biblical connotations, the line comes from Hebrew poet laureate Hayim Nahman Bialik’s poem “LaMitnadvim Ba’Am” (“To the Volunteers Among the People”), a work known for its allegorical Maccabee references.

The poem, written by Bialik in Odessa in 1899, quickly became popular in the Zionist movement, with its stirring Hanukkah-infused call for national renewal, unity and settlement of the Land of Israel.

It was put to music by a number of different composers in the early 20th century, recorded and sung at Zionist gatherings and events.

All of the poster’s elements – quite intentionally assembled – formed a message aimed at Israel’s citizens, especially its new immigrants.

Over the next year, 300,000 additional new arrivals would come from across the globe, and Israel’s second “Ingathering of the Exiles Day” would become known by another name: “The Day of the Million”, in celebration of the Jewish population surpassing one million people.

Celebrations that year took place across Israel and the Jewish world: from Los Angeles to Yemen, Romania to Libya, Australia and elsewhere, including aboard ships on their way to bring the next million new arrivals.

Two flights of immigrants from Yemen arrived at the airport and spirits were generally high at their welcoming party, though at least one report compared the festivities to “The Parade That Didn’t March”, as chaos reigned, with crowds of people squeezed together shouting, and government clerks “fighting like lions by the buffet to get a plate of food…”

Other reports, however, related a more civilized, if not heartwarming affair. A chapter from the Book of Ezekiel and poems by Natan Alterman and David Shimoni were recited, the Police Band played and Hanukkah candles were lit.

After thousands of years of exile, these immigrants were being welcomed home to ancient and modern words hearkening the “Return to Zion”.

Though the “Day of the Million” and the other Israeli holidays of 1948-1949 may be long forgotten, they all helped form the foundation of a national narrative and ethos upon which the young State of Israel could build, despite all that was lacking during those difficult early years.

A version of this article was originally published in Tablet Magazine. It appears here as part of Gesher L’Europa, the National Library of Israel’s initiative to connect with people, institutions and communities across Europe and beyond, through storytelling, knowledge sharing and community engagement.

Thanks to Dr. Hezi Amiur, curator of the Israel Collection at the National Library of Israel, for his expertise and assistance.