The Yemenite Jews Who Arrived in the Holy Land in 1881

Shortly before what is known as "The First Aliyah”, a group of Jews from Yemen arrived in the Land of Israel. Several dozen Yemenite families had embarked on a long and arduous journey to settle in Jerusalem. Once there, they encountered hostility, arrogance, and deprivation on the part of their fellow Jews. Where did they turn and who came to their aid? 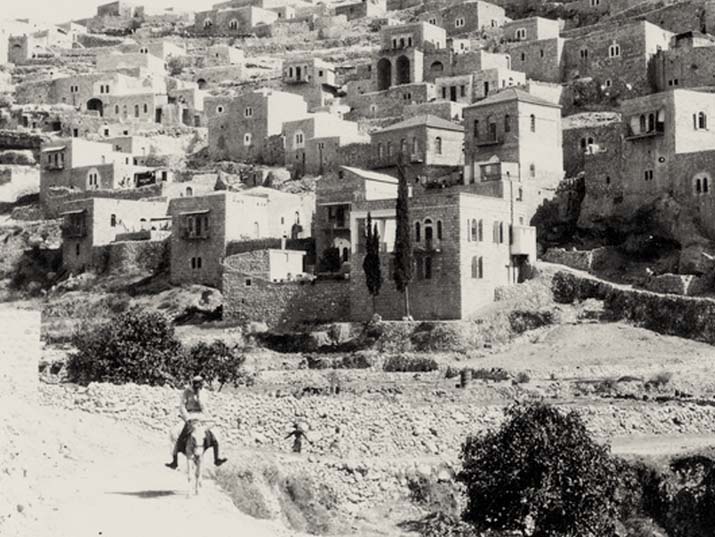 Houses in the village of Shiloah, the Haim Berger Collection, from the Bitmuna Collection, the National Library of Israel

When did “The First Aliyah” – the first major wave of Zionist immigration to the Land of Israel – begin? If you answer by recounting the pogroms in Russia in 1881 and the pioneers of the Bilu movement, you may be mistaken. There were various reasons that led historians to label this wave of immigrants from Europe as “The First Aliyah”, when in fact Jews had been immigrating to the region in a steady trickle before then, from different parts of the globe. Several months before the Eastern European Jews landed in the port of Jaffa to expand and revitalize the local Jewish community, another group of Jews had arrived, but to much less historical fanfare. These were Yemenite Jews, most of them from the city of Sana’a, who had set out on an arduous journey to the Land of Israel shortly after the festival of Shavuot, in May 1881.

What led them to take this step? The reasons are not entirely clear, but apparently, a contributing factor was the Ottoman governor of Yemen’s issuing of an immigration permit. The first few arrived in August 1881. In the following months, and throughout 1882, more immigrants arrived from Yemen, about 200 people in all. In comparison, the Bilu pioneers that landed a few months later numbered only a few dozen. The Hebrew name given to this wave of Yemenite immigrants, E’eleh BeTamar, means, “I will climb up into the palm tree”. It is taken from a verse in the Song of Songs (7:9), and also derives from an anagram of the Hebrew year 5642 – תרמ”ב (corresponding to 1881-1882 and pronounced tarmab in Hebrew).

The Jewish community in the Land of Israel at the time, the Yishuv, consisted of both new arrivals and long-time residents who had been around for generations. Immigrant newcomers had just established the farming community of Petah Tikva, another at Rosh Pina had recently been abandoned, to be re-established the following year, and studies were underway in the Jewish agricultural school at Mikveh Israel.  Yet the majority of Jews in the Land of Israel resided in the four holy cities: Jerusalem, Hebron, Tiberias and Safed. These people were known collectively as the “Old Yishuv.”

The new immigrants from Yemen had their sights set on only one place – Zion, Jerusalem. Their journey had been long and difficult, with few friendly and welcoming faces along the way. They had to pass through rough terrain, traveling through Egypt and India, until they finally reached the Holy Land. Even those who had left Yemen with means arrived in the Land of Israel with their pockets empty.

Once in the Land of Israel, they made their way to Jerusalem. But when they reached the city, these Jews from a distant land, dressed in their unique garb, or what was left of it, were met with hostility. The Yemenite Jews not only looked very different from the Sephardi and Ashkenazi Jews already living there, they followed different traditions, which made it difficult for them to integrate into the Jewish population. What’s more, some of the locals even called into question the new immigrants’ Judaism. This was somewhat ironic, considering Jews were living in Yemen well before Europe’s Sephardi and Ashkenazi communities even coalesced into existence.

The suspicion and doubt also had practical implications. The Old Yishuv in Jerusalem was organized according to community networks, called kollels, which facilitated financial support for the city’s Jewish residents. The Yemenite Jews’ incompatibility with the familiar ethnic patterns caused the community’s administrators to refuse to accept them into the existing kollels and, as a result, they did not receive their share of the charity funds that supported the city’s Jews during this period. In practical terms, this also meant that the recent Jewish arrivals from Yemen were forbidden from settling within the walls of the Old City.

Destitute and looked upon as foreigners, the Yemenite Jewish immigrants had no choice but to seek housing elsewhere. Still, they did not relinquish their dream of settling in Jerusalem. As a first step, they built simple huts outside the Old City’s walls and slept outdoors, under the open sky. Some Yemenite immigrants even slept in caves, barns, and other makeshift shelters in the vicinity of the walled city.

The immigrants did not wait for handouts or for someone else to rescue them. The young people among them immediately went to look for work among the city’s Arab contractors. They did not shy away from manual labor such as mixing mortar, portering, carrying heavy stones for building, or road paving. The older immigrants engaged in handicrafts such as carpentry or pottery repair. However, these jobs were not enough to support the entire community, and the issue of housing was still in need of a solution.

The Yemenite immigrants also continued in their attempts to join one of the kollels in the city in order to receive the distribution money to which they were entitled. Surprisingly, there were periods when the group was part of the Ashkenazi kollel. Eventually, however, they joined the Sephardi kollel, whose members spoke Hebrew and Arabic using a pronunciation that made it easier for the Yemenite Jews to communicate, as opposed to the Ashkenazi Jews whose pronunciation was significantly different. Years later, the Yemenite Jews established their own independent community, in part because of the condescending attitudes of their fellow Jews, who did not allocate them a fair share of the charity funds arriving from abroad.

Refused housing inside the city proper, the Yemenite Jews hoped to settle down as nearby as possible. Their salvation came from an unexpected source. Israel Dov Frumkin, the editor of the Havatzelet newspaper, ardently campaigned on behalf of the Yemenite immigrants. He wrote about their dismal situation in his paper, and contacted the philanthropist Boaz Ben Yonatan Mizrahi, who eventually donated half of the land he owned on the slopes of the Mount of Olives, near the Kidron River, to the immigrants from Yemen. The new tenants called it the village of Shiloah, after the famous Pool of Shiloah (or Siloam) fed by the Gihon Spring.

The proximity to the Old City and the Temple Mount—only a quarter of an hour’s walk—as well as the nearby water sources and open farmland contributed to the Yemenite Jews’ decision to settle there. But they were not alone. The village of Silwan, most of whose residents are Arab, exists to this day. Locals testified that neighborly relations were very good to begin with, and the Jewish and Arab residents would visit and take part in each other’s festivities. According to these testimonies, the Arabs even learned to sing Yemenite wedding songs.

The settlement grew slowly, reaching 150 families at its peak. The expansion stopped when the intensifying Jewish-Arab conflict in other parts of the country reached the village. During the Arab riots of 1929, traveling the roads to Shiloah became dangerous for the village’s Jewish residents, with several violent incidents taking place in the area. With tensions mounting, the village Mukhtar, Hajj Muhammad Ruslan, interceded on behalf of the Jewish residents, confronting the violent instigators. In order not to escalate the situation, the Jewish residents even refused the Haganah’s offer to send fighters to protect them. Ultimately, the Mukhtar could not fend off the rioters. The Jews of Shiloah left their belongings with their Arab neighbors and moved temporarily into the Old City, where they lived like refugees. After calm was restored, the Jews returned to the village, and the story of the Mukhtar coming to their aid became etched in their memory.

Nevertheless, neighborly relations could not survive the intensifying conflict. The Great Arab Revolt of 1936–1939 finally ended the Jewish settlement in the village of Shiloah. The Arab boycott of Jewish products and the closure of the Dung Gate by the authorities cut the village off from the city – a devastating economic blow. There was also increasing harassment by Arab gangs who came from Hebron and Nablus, in addition to looting and even cases of murder. Slowly, more and more families left until in August 1938, exactly 57 years after the first immigrants from Sana’a, Yemen, arrived in Jerusalem, the last of Shiloah’s Jewish residents was evacuated.

Thanks to Dr. Rachel Yedid, director of the “E’eleh BeTamar” association for their help in preparing this article.