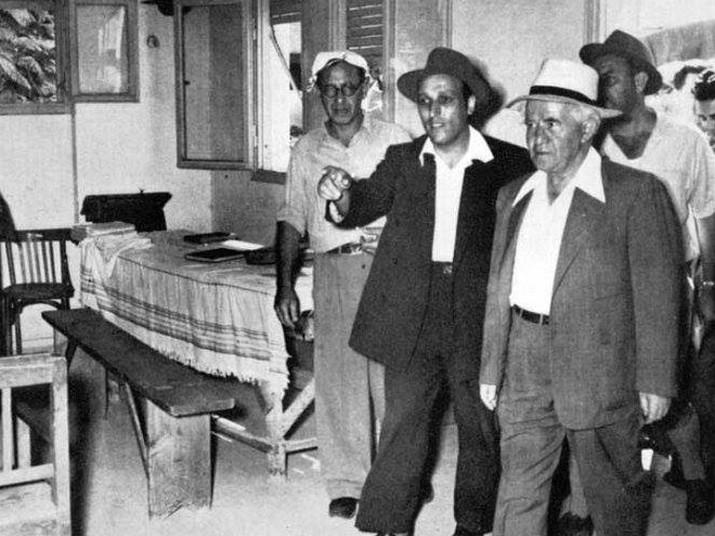 Prime Minister David Ben-Gurion at the entrance to the home of the Chazon Ish in Bnei Brak. Press photographers were not allowed to enter the meeting room.

This morning I went to Bnei Brak for a meeting with the Chazon Ish. The press thought it to be a sensational visit, and I encountered crowds along the way and around his house. A group of his followers waited outside and in the nearby rooms. Yitzhak Navon was the only one who came in with me. I asked him the question to which I have yet to receive a sufficient answer from my observant friends. We are divided in different ways; in the matter at hand we are divided by our views of religious tradition. There are Jews like you and like me, how do we live together? How will we become a unit?

There are some battles that seem to last for an eternity. Such was the meeting between two of the most prominent figures of the Jewish people in their generation. The encounter took place on October 20th, 1952, between Israel’s first prime minister, David Ben-Gurion, and one of the leaders and shapers of ultra-Orthodox Judaism in Israel, Rabbi Avraham Yeshaya Karelitz (commonly known as the Chazon Ish).

On that fateful evening in the rabbi’s humble and austere Bnei Brak apartment, the prime minister, his assistant (and future Israeli president) Yitzhak Navon and the leader of the tiny ultra-Orthodox community in Israel crowded into the living room and sat down for a discussion. The prime minister opened with the ever so pertinent question: “How will we, religious and non-religious Jews, live (together) without exploding from within? We have different views. How do we live together?”

It seemed the answer given by the Chazon Ish was prepared ahead of time. He referred to a well-known Talmudic parable about two camels travelling down a narrow path, one carrying a large burden and the other carrying nothing. According to Halacha, Jewish law, the rabbi explained, the unburdened camel was to make way for the one carrying the burden. The Chazon Ish left no room for interpretation and explained the parable himself: We, the ultra-Orthodox community, bear the burden of the Torah and its commandments. Therefore, the non-religious Zionists must defer to us and move out of our way. Ben-Gurion, not exactly the leader to cower in front of anybody, promptly replied: “And what of the absorption of immigrants? What of security? What of establishing the State? Are these not burdens?”

It soon became clear that the two men held completely different views. Though Ben-Gurion acknowledged the grave importance of studying the Bible, he wanted the ultra-Orthodox community to contribute to and become integrated with the state in the making. The Chazon Ish was appalled at what he saw as the desecration of the Sabbath and the Zionist rejection of the yoke of the commandments – the burden of the practicing religious Jew. He believed that recreating the world of the Torah that was destroyed in the Holocaust was the only thing that could save the Jewish people.

At the end of that meeting, the Prime Minister’s Office issued the following press statement:

PM D. Ben-Gurion met privately with Rabbi A. Y. Karelitz (“The Chazon Ish”) in Bnei Brak yesterday. The purpose of the visit was to exchange general views regarding the following issue: How can observant and non-observant (Jews) live together harmoniously in the State of Israel? The question of recruiting women (to the army) was not discussed and the visit had no relation to current political matters.

Contrary to the report, the meeting was much more than a “general exchange of views.” The prime minister made a gesture towards the ultra-Orthodox community by agreeing to continue the exemption of a limited number of Torah scholars from military service. As early as February 1948, before the State of Israel had even been formally established, a limited number of young ultra-Orthodox men were exempted from being drafted into the armed forces, which were already fighting in what would come to be known as Israel’s War of Independence. On January 9th, 1951, the prime minister ordered the Israeli army’s chief of staff to exempt yeshiva students from regular service. Ben-Gurion’s meeting with the Chazon Ish did not set the ground for the current ultra-Orthdox exemption from military service, but it did give the controversial early arrangement a substantial political boost, and equally significant – symbolic support.