A Farewell Letter From the Besieged Jewish Quarter

“Remember me in happiness”: The last testament of Esther Cailingold, a soldier and teacher who fell in the battle for the Jewish Quarter in Jerusalem's Old City during Israel's War of Independence 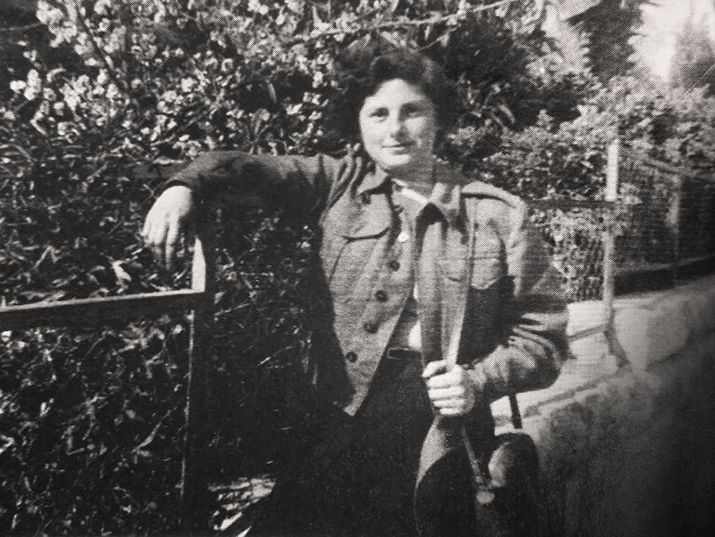 “I have lived my life fully if briefly, and I think this is the best way—’short and sweet.’ Very sweet it has been here in our own land.”

She lay on the floor, along with the rest of the wounded, in the second story of the Armenian monastery. She was burning up with a fever and in unbearable agony. There was no morphine left. Someone offered her a cigarette. She raised her hand towards it, but stopped. “No,” she whispered. “The Sabbath.” Those were her last words. She died not long after, just twenty-two years old at the time of her passing.

Knowing that her end might be near, she wrote a moving letter to her parents in London that was later found under her pillow. A final letter, from the hell that was “the besieged Jewish Quarter, 1948.” The full text is included below.

A footpath in Rehavia

A few years ago, a Jerusalem Municipality committee convened to decide on the names of streets and squares in the city. One of the names commemorated, 70 years after the fact, was that of the soldier and teacher Esther Cailingold, who took part in the defense of the Jewish Quarter in Jerusalem during the War of Independence. A small footpath in the Rehavia neighborhood, leading to the school where she was a teacher, was named after her. 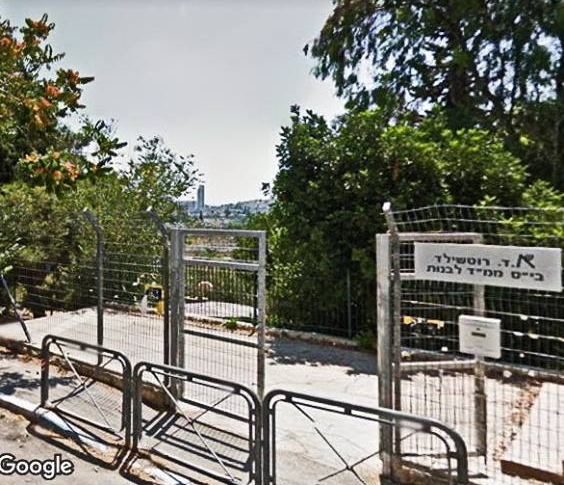 The beginning of Esther’s life does not at all reflect its dramatic end. She was born in London to religious, Zionist parents. As a young woman, Esther excelled in her studies at university.

However, her Zionist upbringing and news of the horrors of the Holocaust that was filtering through at the time caused her to change paths and immigrate to Mandatory Palestine in 1946.

She sought her future in the Land of Israel as an English teacher, and found it at the Evelina de Rothschild School in Jerusalem. In late 1947, she joined the Haganah, the largest of the Jewish military organizations in Mandatory Palestine. At first, she continued to teach, but soon enough, as what would come to be known as Israel’s War of Independence unfolded, she became a full-time soldier. A few months later, when she heard of the plight of the Jewish Quarter in the Old City, she asked to join the defenders of the besieged Quarter.

There were about 1,700 people living in the Jewish Quarter at the time, most of them without military training – ultra-Orthodox men, women, children and the elderly, whose defense was in the hands of roughly 150 fighters, armed with insufficient weapons. So long as the country was still under British control, the fighters could only enter the quarter disguised as regular civilians, and so Esther arrived under the guise of a teacher. At first, she served as a signal liaison between various Haganah positions, providing food, drink and ammunition for the fighters.

With the departure of the British in mid-May, Arab attacks on the Jewish Quarter intensified. Esther was lightly wounded, but she was bandaged up and quickly returned to her post. She often ran along the rooftops, dodging bullets that whizzed by to reach the various Haganah positions.

“It was Saturday night. The people of Jerusalem sat in their homes. They cheered and celebrated the Declaration of Independence in haste and restraint, certain in the knowledge that war was imminent, and here it was already showing its first signs. The Arab attack cut short the festivities, and continued for the rest of the week.  But now, it is the Sabbath and Jerusalem’s Jews sit in their homes, distraught. At this hour, the city’s streets have gone quiet. And its guardians do not rest.”

(A column written by Esther and published in the Hebrew newspaper Hatsofeh, 15 years after her death.)

She was given a rifle and became a fighter

On May 16, the Arab attack began on the Jewish Quarter, and within a day managed to seize about a third of it. On May 19, a Palmach (the elite fighting force of the Haganah) unit was able to breach the Quarter, but soon had to withdraw due to the exhaustion of the fighters. Their replacements, lacking any military training, were also unable to help.

That same day, Jordan’s Arab Legion force, commanded by British officers, invaded the Old City and began shelling the Jewish Quarter. The defenders of the Jewish Quarter fought Arab canons, mortars, and machine guns with pistols, rifles, and scarcely any ammunition. That day, Esther Cailingold was given a rifle and she became a fighter.

Then, on May 26, Arab forces blew up a building just as Esther was entering it, shattering her spine.  She was evacuated to the clinic in the Jewish Quarter, but with no medical supplies, and the facilities in poor condition, there was nothing they could do for her. Slowly dying, she was able to remain conscious, speaking and praying with those near her.

“It is difficult to count all of the acts of heroism… one young woman, named Esther, lay wounded in the hospital and vanished. Later it became known that she had taken up a rifle and gone out to shoot at the enemy, until she was wounded and killed by a bullet to the back.”

(A witness’ account of Esther’s bravery, published in Hebrew in the Davar newspaper, June 1, 1948, click here for the full article)

A letter found under a pillow

Meanwhile, the members of the Legion continued to blow up the houses of the Jewish Quarter, one by one, until it finally fell and the inhabitants surrendered. The wounded, including Esther, were evacuated to the nearby Armenian monastery. It was a Saturday, May 29, 1948. Esther Cailingold lay on the floor, on the second story of the monastery, along with the rest of the wounded. She was burning up with a fever and in unbearable agony. There was no morphine left. Someone offered her a cigarette. She raised her hand towards it, but then stopped.

“A year after the heroic death of my daughter Esther. May the LORD avenge her death.  His delicate and sweet daughter [who was] loved by all. She was modest in her deeds. She was deeply religious and went often to pray in the Hasidic synagogues…

Arriving in the last convoy to the Old City, she said, ‘I am happy to be near the Western Wall!’ There she was slightly wounded, but she refused to accept help and continued. On the day of the surrender, she was fatally wounded, on the eve of Shabbat Beḥukotai [“By my decrees,” the 33rd weekly Torah portion], she asked for a prayer book and with the help of her friend Shulamit, she prayed minḥa  [the afternoon prayer] and Kabbalat Shabbat [prayers welcoming the Sabbath recited on Friday evening], and at six o’clock in the morning on the holy Sabbath, she died.”

(The eulogy recited by Esther’s father a year after her death. Published in Hebrew in Hatsofeh, May 29, 1949. Click here for the full obituary in Hebrew)

“No,” she whispered. “The Sabbath.” Those were her last words. She died around five in the afternoon, just twenty-two years old at the time of her death. She was buried first in the Sheikh Bader cemetery and two years later, her remains were reinterred in the military cemetery on Mount Herzl.

Here is the text of her final letter, written in Hebrew and found under her pillow, which she had written six days earlier:

Dear Mummy and Daddy, and Everybody,

If you get this at all, it will be, I suppose, typical of all my hurried, messy letters. I am writing it to beg of you: Make an effort to accept everything that has happened to me, accept it with the meaning that I intended and understand that I have no regrets. We have had a bitter fight and we have experienced Gehenom [“hell” ed.] – but it has been worthwhile because I am completely convinced that the end will see a Jewish state and the realization of our longings.

I shall be only one of many who fell in sacrifice. I had an urge to write this because one in particular was killed today who meant a great deal to me. Because of the sorrow I felt, I want you to take it differently – to remember that we were soldiers and had the greatest and noblest cause to fight for. God is with us, I know, in His Holy City, and I am proud and ready to pay the price it may cost me.

Don’t think I have taken ‘unnecessary risks.’ There is no other choice when human resources are short. I hope you may have a chance of meeting any of my co-fighters who survive if I do not, and that you will be pleased and not sad about how they talk of me. Please, please, do not be sadder than you can help. I have lived my life fully if briefly, and I think this is the best way — ‘short and sweet.’ Very sweet it has been here in our own land. I hope you shall enjoy from Mimi [Esther’s sister] and Asher [Mimi’s husband] the satisfaction you missed in me. Let it be without regrets, and then I too shall be happy. I am thinking of you all, every single one of you in the family, and am full of pleasure at the thought that you will, one day, very soon I hope, come and enjoy the fruits of that for which we are fighting.

Much, much love, be happy and remember me in happiness.

The commander of the Jewish Quarter, Moshe Rusnak, wrote to her parents, recommending that Esther be awarded a citation of merit. This never came to pass. 74 years later, at least a small path in Rehavia is now named after her.

May her memory be a blessing.

(“From London to Jerusalem: The Story of a Female Fighter in the Haganah”)

This article is based on a Facebook post by Benny Landek, originally written in Hebrew, which you can find here.

The Story of Esther Cailingold

An Encounter with Esther Cailingold – Heroine of Jerusalem