Dr. Zvi Leshem, Director of the Gershom Scholem Collection, shares some personal memories of his own Rabbi and mentor, Prof. David Halivni, who recently passed away and whose path crossed with that of the legendary Kabbalah scholar… 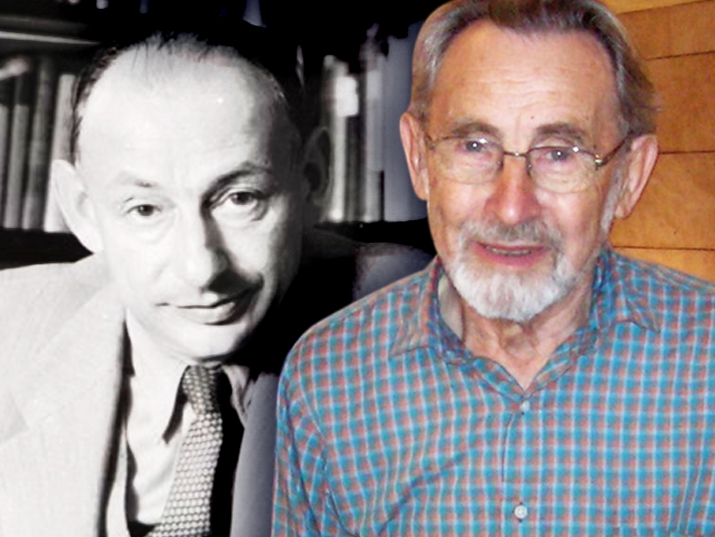 The Talmudic scholar, Rabbi Prof. David Halivni (1927-2022), who recently passed away in Jerusalem and who was a near-permanent presence at the National Library of Israel for many years, had a friendship of sorts with the scholar of Kabbalah, Prof. Gershom Scholem (1897-1982).

Scholem was 30 years older than Halivni, so it wasn’t an “even” friendship. I suspect that it was initially established via Prof. Shaul Lieberman, Halivni’s mentor and a very close friend of Scholem. I once asked Prof. Halivni what Scholem and Lieberman had in common, as they seemed to have come from such different backgrounds, lived different lifestyles and had different scholarly pursuits (there is an urban legend that the Lieberman was once in Scholem’s apartment, with a library of some 30,000 volumes, and quipped, “But there is nothing here to read!”). Prof. Halivni answered, “They were both lovers of Torah”.

When R. Halivni left the Jewish Theological Seminary in the 1980s over the issue of women’s ordination, Scholem reacted incredulously, remarking, “but you are the Wellhausen of the Talmud!”, a reference to Julius Wellhausen, the father of Higher Biblical Criticism, and seemingly comparing the German scholar’s work to Halivni’s own Source Critical approach to Talmudic analysis. Apparently Scholem was incapable of understanding how one could be simultaneously a critical text scholar as well as a conservative halachasist.

In the Scholem Collection there is one offprint of a Halivni article and a photocopy of another. The offprint is of “Contemporary Methods of the Study of the Talmud” (Journal of Jewish Studies 30:2, Autumn 1979), and is annotated with Scholem’s marginalia. It is possible that Scholem also possessed some of Halivni’s books as well. Not everything from his home collection came to the Library, but that deserves a separate discussion.

Since we mentioned R. Lieberman, I will close with a little-known anecdote that Prof. Halivni once shared with me. The first time he visited Israel (early 60s I believe) was to lecture at the World Congress of Jewish Studies. When he entered the lecture hall he saw the Israeli author S.Y. Agnon (whom he recognized from pictures) sitting in the front row. He couldn’t figure out what he was doing there. When he returned to New York he mentioned this to R. Lieberman who chuckled and said, “Agnon is always telling me that I probably don’t have any good students in the Diaspora, so I told him he should go listen to you”.

On that note, in 1963, the American Hebrew newspaper, HaDoar, printed a special edition in honor of Lieberman’s 65th birthday. In his “ad” which appeared in the edition, Agnon reflected sadly upon R. Lieberman living outside of Israel (though Lieberman did also own an apartment in Jerusalem, close to that of Scholem, were he spent a good deal of time during his later years), concluding, “As long as most of Am Yisrael is in exile it is good that this scholar, a true Gaon, is in your midst, for surely HaShem sent him as a salvation for you, to raise up a great remnant”.

Both Professors, Scholem and Halivni, participated in a program in 1973 called “The Religious Dimension of Judaism”, hosted by the Center for the Study of Democratic Institutions. In it, Scholem read a paper and Halivni was one of the responders. You can listen to a recording of the event here.

May the memory of all of these great scholars be for a blessing.