Ruth the Moabite: The Most Beautiful Woman You’ve Never Seen

The Book of Ruth is an extraordinary biblical story. At its center is the brave friendship between two women that leads to the founding of the Davidic dynasty, and a heroine whose character traits made her an everlasting symbol of beauty 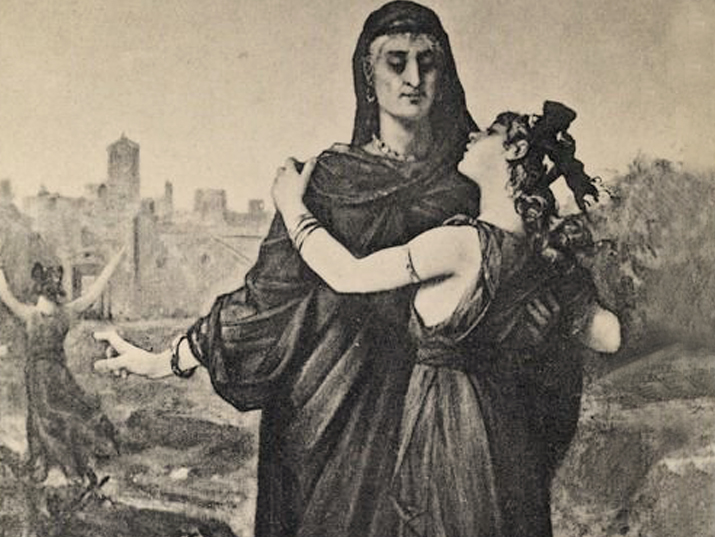 Naomi and Ruth, reproduction of a work by French artist Louis Héctor Leroux, one of the first 100 postcards printed by the Lebanon publishing firm, the Postcard Collection at the National Library of Israel

Among the hundreds of stories that appear in the Hebrew Bible, the tale that unfolds in the Book of Ruth is imbued with a unique, fresh spirit and unparalleled originality. It is a story devoid of heroic male figures or villains, no sin or punishment, war or peace. It is a story of life itself embodied in the figures of two female protagonists: Ruth and Naomi. The Bible devotes very little space to the stories of women, and few female figures receive an entire book. Some women in the Bible aren’t even mentioned by name, and those who are tend to have their outward appearance emphasized. Ruth is an exception.

Ruth is a heroine whose actions define her character—her devotion to her mother-in-law Naomi, who can offer her nothing but companionship; her willingness to leave her familiar life behind and move to a foreign land, without money, property or security; her modesty, resourcefulness, and the brave,  underestimated, friendship between the young foreign widow and her mother-in-law. All of these factors make Ruth a beautiful figure, without us knowing anything about her physical appearance.

These traits explain why Ruth captivated the imaginations of so many artists, and often served as a model of female beauty in paintings of biblical scenes, particularly during the Romantic era. It is therefore not surprising that a picture postcard series published by the “Lebanon” publishing house in the late 19th and early 20th centuries includes a number of wonderful reproductions of artworks depicting scenes from the Book of Ruth.

A Biblical Legend: Two Women against All Odds

Ruth is not a classic heroine. She is a figure on the margins of society: a foreigner, widowed and poor. But, like in a fairy tale, not only does her story end with a joyous marriage to a respectable man, a member of the chosen people, she is also rewarded: her lineage establishes the royal dynasty of King David. This success is not to be taken for granted in the patriarchal world of the Bible. In fact, such a positive story dealing with the relationship between two women -Ruth and Naomi – is unique in the literary landscape of the Bible.

In just four chapters, the biblical author of the Book of Ruth manages to create the image of a complete world for the story’s heroines,  sketching a delicate and loving relationship, which, against all odds, changes destinies—and for the better. The brief dialogue in the first chapter between Naomi and her widowed daughters-in-law, Orpah and Ruth, sets the stage for a much larger plot.

Naomi virtuously asks her daughters-in-law to return to their community so that they might rebuild their lives. However, Ruth chooses to share her mother-in-law’s fate despite the many difficulties, offering a strong declaration of love:

“Entreat me not to leave thee, and to return from following after thee; for whither thou goest, I will go; and where thou lodgest, I will lodge; thy people shall be my people, and thy God my God; where thou diest, will I die, and there will I be buried; the LORD do so to me, and more also, if aught but death part thee and me” (Book of Ruth 1: 16–17).

Readers learn about their hardships only tacitly from the story. At their most vulnerable moment, Ruth and Naomi find a clever solution that relies on their respective talents. In an effort to save her mother-in-law from starving, Ruth goes to the fields to gather stalks of wheat dropped by the reapers. Meanwhile, Naomi, who does not join Ruth in the field, uses her practical sense to devise a plan to save her brave daughter-in-law. Their mutual caring and capacity to listen to each other are the keys to their alliance. Knowing that a young and impressive woman like Ruth attracts attention, Naomi creates the conditions for a solution to her daughter-in-law’s predicament, which in the biblical world is marriage and status.

In the next part of the story, more is hidden than revealed. The biblical author leaves things seemingly innocent on the surface. Yet, in setting the scene on the threshing floor at night, and using language replete with verbs carrying a secondary sexual meaning, he constructs palpable sexual tension. We will never know what happened that night between Ruth and Boaz on the threshing room floor, but the story ends happily—Boaz redeems the poor foreigner Ruth and their marriage makes her a rich and respectable woman. With the birth of the couple’s son Obed, Naomi too is rewarded. She becomes a grandmother, a role that was almost denied her. The Davidic dynasty was established thanks to these two women and their story is enshrined in the Book of Books.

The Book of Ruth’s revolutionary feminism may not have shattered any glass ceilings, but it did make some dents. In the end, Ruth and Naomi’s fate was changed by the actions of men. Yet those actions were carefully shaped by thoughtful female instigation and guidance. One can also find in the story an ambivalence familiar from the modern era — women as the main driving force in private spaces, and men who dominate the public arena, while benefiting from greater privileges.

The first three chapters describe an enterprising and courageous sisterhood of two unique women. Ruth is assertive, independent and loyal to Naomi. She operates modestly and with complete trust in the wisdom of her elder. In reward for her loyalty and goodness, wise Naomi guides the young woman’s life to ensure her future welfare. Naomi and Ruth demonstrate an autonomy and feminine wisdom not described anywhere else in the Bible. Together they act towards their own benefit within the social conventions of the era and without compromising their reputations.

This cooperation and reciprocity gives power to the powerless. In a tough world with rigid boundaries, this partnership manages to change fates, not through physical beauty or cunning, but through courage, empathy and mutual support. Together they bring about an optimal result, which otherwise would not have materialized. This is an inspiring story about women in a man’s world and about how women’s character, friendship, and love have changed destinies over the ages, from biblical times to this very day.