Why Does Elijah Visit Us on the Eve of Passover?

Home > Deciphering Jewish Manuscripts > Why Does Elijah Visit Us on the Eve of Passover?
Judaism 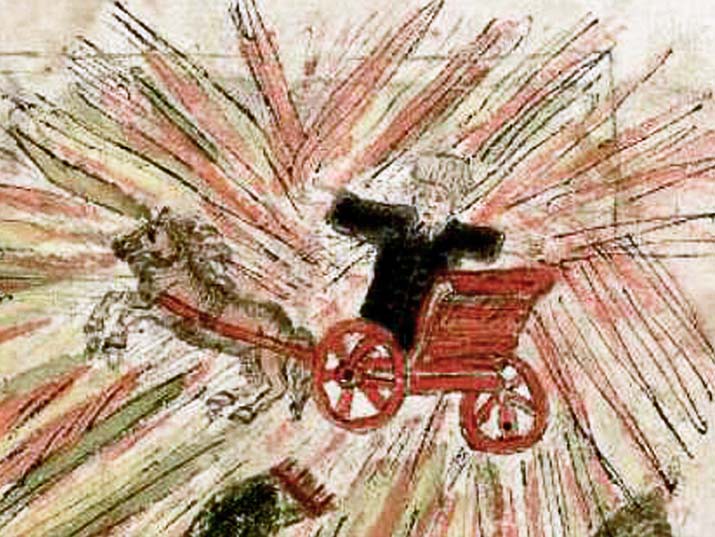 Elijah ascends to the heavens, in a chariot of fire. From a copy of Sefer Evronot, 1716, the National Library of Israel collections

Behold, I will send you Elijah the prophet before the coming of the great and terrible day of the LORD,

We know him as the secret guest of the Seder feast…

Some say that he celebrates alongside the rest of the festive meal’s participants – present, yet unseen. Others swear that he arrives in the dead of night and tastes from the remaining cup of wine when everyone is already fast asleep, after having drunk their four cups. Truly, there is none better suited for the role of guest than the prophet Elijah. The biblical book of Malachi describes the prophet as the herald of redemption. He is also one of the only biblical figures whose death is not related in the Bible. Like Enoch, he ascends to heaven before death.

Elijah’s debut on the biblical stage is as dramatic as his departure: He first appears while prophesying a drought that will cease only when he himself calls for the rains to fall. His prophesy immediately follows a listing of the sins of King Ahab. The severe drought that Elijah inflicts on Israel lasts for three years. When King Ahab attempts to undo it, Elijah challenges him, defeating and even killing the prophets of Baal, causing King Ahab at last to repent and abandon idolatry. When Ahab’s son Ahaziah succeeds him to the throne, the new king is quick to restore idol worship. Ahaziah sends two groups of soldiers to kill the aged Elijah, one after another, yet both missions end in disaster – Elijah summons fire from the heavens to consume the soldiers. The third time, the soldiers kneel before the prophet, begging him to spare them. The king dies as a result and his brother Yoram succeeds him.

After the death of the sinful king comes the denouement in the story of the prophet—his ascension to heaven in the presence of his disciple Elisha:

“And it came to pass, as they still went on, and talked, that, behold, there appeared a chariot of fire, and horses of fire, which parted them both asunder; and Elijah went up by a whirlwind into heaven.” (2 Kings 2:11)

Among the Hebrew prophets, Elijah stands out as a strict and stubborn figure who is not afraid to confront the kings of Israel or its God. He is also the only prophet who seeks a tangible and severe punishment for the sinful people of Israel. All of which makes it puzzling that this is the very same kindly old man who comes to visit us on the night of the Seder, and whose chair is reserved in the synagogue for use during the Brit Milah or Bris (circumcision) ceremony.

So why did Elijah, specifically, inherit these roles in Jewish tradition? It seems that his religious zeal for the strict adherence to God’s laws was what secured him the role of guardian and guest. Moreover, his Passover role is predicated on the special chair in the synagogue bearing his name.

The tradition of Elijah’s chair being used during the circumcision ceremony began in the Middle Ages, when a tale developed of an agreement made between God and the zealous Elijah, that a Jewish baby’s circumcision could not be held without the prophet’s presence. In Pirkei Derabi Dliezer, it is written – “By thy life! They shall not observe the covenant of circumcision until thou seest it (done) with thine eyes. Hence the sages instituted the custom that people should have a seat of honor for the Messenger of the Covenant” (chap. 29, 213-214).[1]

The most zealous of God’s prophets, who asks that the sinful people of Israel be stricken (usually, it’s the other way round, with God signaling his wrath against his sinning people through one of his prophets), is naturally also considered the strictest when it comes to following rules. That is why he was also given this role, to oversee the circumcision, to ensure that it be carried out to the letter of the law.

We’ve already mentioned that Elijah is considered the herald of redemption—who wouldn’t want a guest bearing such good tidings? Elijah, having already proved himself in his Brit Milah ceremony role, was recruited to serve as the guest of honor at the Seder feast, one of the holiest nights of the Jewish year.  Passover is also called the Festival of Redemption, and who better than the herald of redemption to be the special guest at our Seders?

Elijah is also the bringer of peace. With redemption not quite upon us yet, the peace that Elijah brings on the eve of the Seder is first and foremost for the celebrants, and is directly related to the terrible persecution experienced by the Jews of Ashkenaz in the Middle Ages. The figure of Elijah served as a shield from antisemitic persecutions which would tend to escalate before Passover due to false claims about Jews murdering Christian children and using their blood to bake matzah bread.

It’s worth noting that, despite his obvious zeal and enthusiasm, the figure of Elijah is quite separate from that of the Messiah – Elijah serves to herald redemption, he does not bring it himself. If Elijah the prophet does visit our home, this is not evidence that heaven on earth has been declared, only that we have again been granted a measure of peace and security for this year. A lower bar, certainly, but still one we are happy to accept.

Over time and with the growing sense of security among the world’s Jews, especially since the establishment of the State of Israel, the peace that Elijah brings is understood in more narrow terms; that is – between parents and children. Already in the Talmudic literature and within the framework of his role as the messenger of peace, Elijah is considered Judaism’s supreme arbiter. Hence, he was recruited to settle the great Seder controversy: the fifth cup. A heated debate took place among the sages over how many cups of wine to drink at the Seder meal. The generally agreed-upon answer is four, but some argued for five. Therefore, a compromise was reached: We pour five cups of wine, but drink only four.  And when Elijah returns he will solve the problem, once and for all!

Eventually, Elijah was called upon to settle more serious disputes, and in case you didn’t know, dear readers, there is a belief that our Elijah is the deciding vote even in soccer matches. The Hebrew term teiku (the equivalent of “tie” or “draw”), appears in Talmudic literature as a term that indicates a discussion among the sages that ends in indecision. The word is interpreted as an acronym for: Tishbi yitaretz kushiyot uba’ayot (literally, “[Elijah of] Tishbi will decide questions and problems”), meaning, the question will stand until such time when the prophet Elijah of Tishbi will arrive and decide it.

Jewish tradition loves innovations, but only those that are rooted in the Jewish sources. The prophet Elijah is the herald of redemption, bringer of peace, the prophet who escaped death, and also – and this explains his miraculous visiting abilities – a teleporter of the highest order. The term kfitzat haderekh (lit. “contraction of the road”) appears in the Talmud as a journey that is miraculously shortened. After all, Elijah of the book of Kings is already unique in his ability to launch himself from one location to another. Before ascending to heaven, he was known for his sudden appearances. One moment he is in Tsarfat, (no, not the Hebrew name for France, but the ancient Phoenician city Sarepta, Sarafan in modern-day Lebanon) and the next he is standing in front of Obadiah, a court official in charge of King Ahab’s household in the Kingdom of Israel. Even those to whom Elijah suddenly appears are not too shaken, as Obadiah says to the prophet, “And it will come to pass, as soon as I am gone from thee, that the spirit of the LORD will carry thee whither I know not” (1 Kings 18:12)

The traditions of the prophet Elijah that began in Ashkenaz in the Middle Ages are preserved to this day among all the Jewish communities of the world. Most of us still leave an empty chair and a full cup of wine for the prophet Elijah, just in case. And, if and when the time comes to announce the redemption and peace on earth, who are we to argue?

Thanks to Dr. Chana Shaham-Rozby for her help with this article.

[1] Pirkei de rabbi eliezer (“The Chapters of Rabbi Eliezer the Great, According to the Text of the Manuscript Belonging to Abraham Epstein of Vienna”), translated and annotated by Gerald Friedlander (New York: Bloch Publishing, 1916)