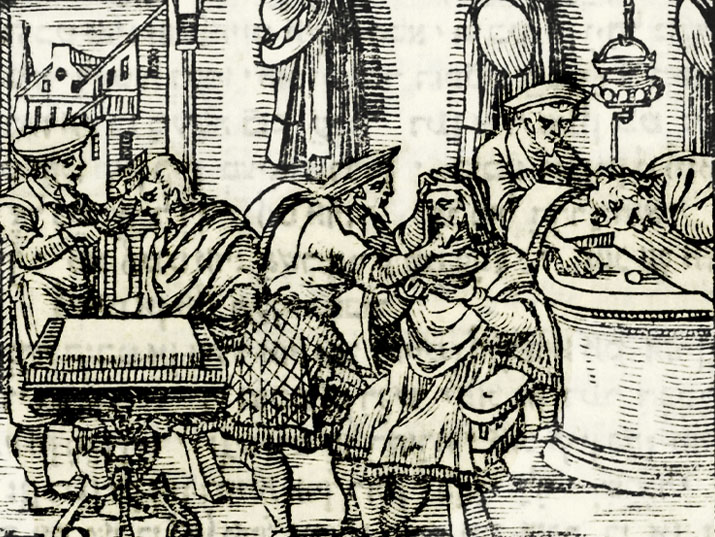 The earliest known documentation of the custom of haircutting on Lag BaOmer. From: Sefer HaMinhagim, 1601, the National Library of Israel collections

In 1601, a unique manual was printed in Venice for the benefit of members of the Jewish community, with the intended audience including adults and children alike. The Sefer HaMinhagim (“Book of Customs”) was printed in Yiddish—a language we would not necessarily associate with Italian Jewry. Although Yiddish was not widely used in the rabbinic literature of the time, Judeo-German was one of the most commonly spoken languages ​​among Italian Jews.

The book’s authors took into account the difficulty of some of its readers in deciphering the written commandments and therefore included woodcut illustrations to make the religious laws, commandments and customs more accessible. The use of illustrations that dramatized the various laws and traditions was apparently intended to allow readers of the book to clearly understand the practicalities of Jewish life and customs in simple, direct fashion.

The book contains the first known documentation of the Lag BaOmer custom of cutting one’s hair, an act that symbolizes the end of the historical period of mourning dedicated to the disciples of Rabbi Akiva. According to Jewish tradition, the Rabbi’s 24,000 disciples were stricken with disease as punishment for not treating each other with respect. Some scholars believe that the Rabbi’s followers in fact perished during the events of the Bar Kokhba Revolt.

“The more detailed the illustration in the books, the easier it was to clearly explain the religious laws relating to the haircutting custom,” explains Dr. Yoel Finkelman, Curator of the Haim and Hanna Salomon Judaica Collection at the National Library of Israel.