Abba Kovner and the Jewish Avengers

"Better to fall as free fighters than to live by the mercy of the murderers. Arise! Arise with your last breath!" 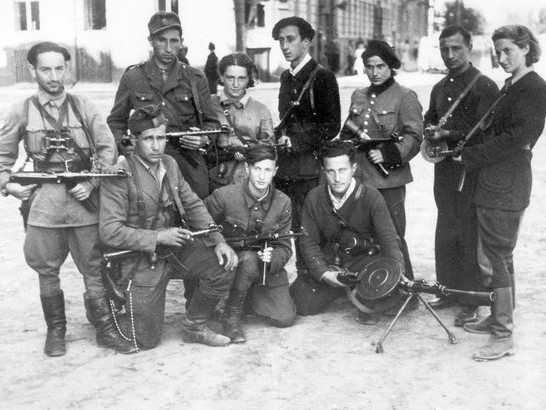 Abba Kovner (back row, center) with members of the FPO in Vilna, 1940's

When the Nazis infiltrated Poland and the rest of Eastern Europe during Operation Barbarossa in the summer of 1941, they established the Vilna Ghetto and rounded up the Jews of the city. Between June and December of 1941, the Nazis and their collaborators murdered 40,000 of Vilna’s Jews, herding them to the forest of Ponar. It was there, in the forest, that the Nazis forced the Jews to dig their own graves. Once the digging was complete, the Nazis shot the Jews and buried them in the freshly turned earth. Their bodies have remained there to this day.

On New Year’s Eve of 1942, Abba Kovner published a manifesto in the Vilna Ghetto whose message has become infamous:

“Jewish youth! Do not trust those who are trying to deceive you. Hitler plans to destroy all the Jews of Europe…We will not be led like sheep to the slaughter! True, we are weak and defenseless, but the only reply to the murderer is revolt! Brothers! Better to fall as free fighters than to live by the mercy of the murderers. Arise! Arise with your last breath!”

Practically overnight, the Vilna Ghetto partisans formed a militia under the name Fareynikte Partizaner Organizatsye (The FPO – Eng: United Partisan Organization) of which Abba Kovner was one of the leaders. Among the fighters was the poet Avraham Sutzkever and student activist Vitka Kempner.

“We will not be led like sheep to the slaughter,” the battle cry of the Vilna Ghetto partisans, spread far and wide. The organization, nicknamed Ha Nokmim (“The Avengers”), was considered a valiant group in the Jewish resistance against the Nazis.

When the Vilna Ghetto was liquidated in 1943, the Avengers fled to the woods and continued their fight against the Nazis and their collaborators until the bitter end of the Second World War.

Once the war was won and the the Nazi camps were captured and liberated, the magnitude of what the Nazis had done came to light. Kovner and his Vilna partisan compatriots traveled to the Ponar forest and, after seeing the murder perpetuated there, Kovner was stunned by the extent of the destruction. He continued traveling through the countryside that had been liberated from the Nazis and saw the cold industrialization of murder that was perpetrated at Auschwitz, Majdanek, and Treblinka.

Kovner’s desire for revenge became all-consuming and he began penning a plan for action. It was then that Kovner founded a secret organization of likeminded people called Nakam (“revenge”).

“… We have taken it upon ourselves not to let the world forget by performing the necessary act: Retribution. It will be more than revenge; it must be the law of the murdered Jewish people! Its name will therefore be DIN [the acronym of Dam Israel Noter, means “The Blood of Israel is Vengeful” – and “din” itself means “judgement”] so that posterity may know that in this merciless, uncompassionate world there are both judge and judgement.”

The ultimate plan for revenge? To kill six million Germans.

Kovner’s grand plan to poison a German reservoir never did come to pass, but in the spring of 1946, the Nakam group poisoned bread meant to feed S.S. unit prisoners in Stalag 13 in Nuremberg, which was under American authority at the time. The Nakam group infiltrated the kitchens of the POW camp and brushed 3,000 loafs of bread with arsenic.

The outcome of these events and what actually occurred as a result of the actions of Nakam is widely disputed.

In the decades following the Holocaust and the founding of Nakam, Kovner settled in Israel, married Vitka Kempner, published poetry in Yiddish and Hebrew, was a founding member of the Museum of the Jewish People, and was awarded several prizes for his work and legacy, among them the Israel Prize.

The desire for vengeance burned within Kovner’s heart for decades, and though he and the Nakam group never fulfilled their ultimate plan for revenge on six million Germans, he and the rest of the surviving partisans of the Vilna Ghetto played a crucial part in telling the story of rebellion and heroism during the Holocaust.

More Information about Nakam and Abba Kovner’s involvement can be found in Dina Porat’s “The Fall of the Sparrow: The Life and Times of Abba Kovner“.

Who Stood with the Orphans When the Nazis Came?