Though they were both among the leading scholars in their field, Gershom Scholem had some fascinating critiques of his contemporary, Harry A. Wolfson 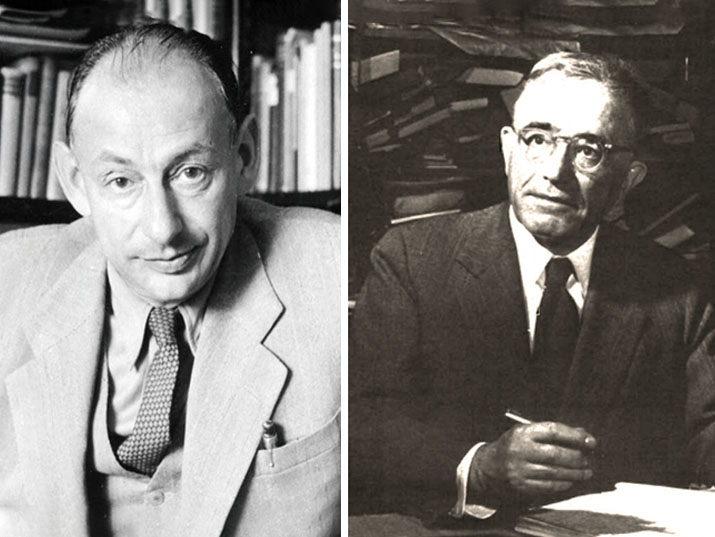 Harry Austryn Wolfson (1887-1974) is widely remembered as one of the greatest scholars of Judaic Studies in general, and of Jewish Philosophy in particular, of all times. The first full time professor of Jewish Studies in an American university (Harvard, where he also matriculated), Wolfson was a prolific author of wide ranging studies, not only in Judaica, but also in religious studies, penning major works on classic Christianity and Islam, as well.

At Harvard, where he taught for some fifty years, he trained two generations of scholars in Jewish studies, including Prof. Isadore Twersky, Prof. Arthur Hyman and many others. This is all the more remarkable considering that he grew up in a small shtetl in today’s Belarus and came to America at the age of 16 with excellent Talmudic training under Rabbi Moshe Mordechai Epstein at the famed Slabodka Yeshiva, but with no formal secular training. Despite quotas limiting Jewish students at the time, Wolfson gained admittance to Harvard, studying with a diverse range of great scholars including George Foot Moore and George Santayana. He remained there for the rest of his long life.

His major studies in the realm of Judaica include those on R. Hasdai Crescas (1929), Spinoza (1934) and Philo (1947). He also published books on the Church Fathers (1956) and two volumes on the philosophy of the Kalam (posthumously, 1976, 1979). Wolfson quipped at one point that the Kalam became “his Vietnam” in the sense that he felt bogged down in the topic and unable to extricate himself.

Although he never traveled to Israel, Wolfson had occasion to meet Prof. Gershom Scholem on the latter’s trips to the United States. Here our story begins. On a visit in 1956, Wolfson presented Scholem with what, according to Scholem, he described as “my shortest work which, one day, will be a collectors’ item”. That work, a six-page pamphlet with only a page and half of text was the Morning Chapel Talk, based on a sermon that Wolfson had delivered in Appleton Chapel at Harvard on March 17th, 1955. According to Harvard tradition, every day at noon a different faculty member delivered a brief sermon. Wolfson, who had managed to avoid giving the sermon for many decades, finally acquiesced and delivered one based upon the verse “The fool hath said in his heart, there is no God” (Psalms 14:1).  Wolfson inscribed the pamphlet, tongue in cheek:

(To my friend Professor Gershom Scholem

Preacher of the holy community of Cambridge)

This time volume, which truly pales in comparison to Wolfson’s enormous books, and of which the National Library of Israel possesses only one copy, is found in the rare book division of the Gershom Scholem Collection.

There it would perhaps have been forgotten were it not for a series of events some twenty years later, after Wolfson’s death. One of Wolfson’s students and admirers, Leo W. Schwartz, had penned a biography, Wolfson of Harvard: Portrait of a Scholar (1978), which only appeared in print after the deaths of both Schwartz and Wolfson.

As it happens, Scholem was invited by John Gross, the editor of the Times Literary Supplement, to write a review.

Scholem threw himself into the project, filling the 310-page volume with extensive marginalia and adding several additional pages of notes as well, which are preserved today in the Gershom Scholem Archive at the National Library. What comes to light in perusing these notes is that while Scholem was impressed with Wolfson’s scholarship (although he has some criticism as well; Wolfson was considered a “daring” scholar and many of his theories were considered controversial), he seems to have had a more complex view of Wolfson the individual. As we shall see, Scholem was peeved by Wolfson’s never having visited Israel. Additionally, he apparently found this somewhat reclusive life-long bachelor to be rather odd. Thus we find in the notes that Scholem scribbled, references to Wolfson’s “eccentricities”, especially in his later years.

Elsewhere, Scholem, apparently exhibiting a touch of sarcasm, even felt the need to comment on Wolfson’s favorite leisure time activity – the cinema, noting that, “he slept there!”

The result of this was Scholem’s one-page review, published in the Times Literary Supplement on November 23rd, 1979 (p. 16). The very curious title was “The Sleuth from Slobodka”. It is striking that whereas the book he was reviewing chose to describe him in the title as “Of Harvard”, Scholem instead chose to emphasize Wolfson’s yeshiva background rather than his Harvard career![1]

After describing Schwartz’s book as “a curious book about a thrice-curious man”, Scholem does admit that Wolfson was “one of the towering Jewish Scholars of his period”. However, the tone quickly changes and Scholem states, “That the first professor of Jewish studies at Harvard should be a Yeshiva Bocher…may not be so surprising, given the background of most Jewish scholars who came to America. What is surprising is that…all his life he remained essentially a Yeshiva Bocher and transplanted the mind…of this species into the august halls of Harvard and into a method…given a modernist name: in his words, the ‘hypothetico-deductive method of text interpretation’”.[2] While Scholem is not the only scholar to have noted the methodological affinity between Wolfson’s research methods and that of the Talmudic inquiry that he had learned from Rabbi Epstein,[3] his highly critical response may be unique.

Scholem goes on to take Wolfson to task for “declining – often at the last minute – invitations to Europe and Israel where the universities were eager to have him as a guest or, in the case of the Hebrew University in Jerusalem, as a full professor.” Clearly Scholem, whose life trajectory was “From Berlin to Jerusalem”, was unimpressed by the strident Americanism of the scholar who had come “from Slobodka to Cambridge”! He also stresses Wolfson’s declining to express his own opinions upon the great issues facing the Jewish People in his time and goes so far as to accuse him of hankering for Gentile praise. Thus the critique of Schwartz’s highly sympathetic book spills over into a caustic critique of the book’s subject as well. Scholem was also bothered by the fact that Schwartz chose not to discuss Wolfson’s scholarly opponents, and he singles out Leo Strauss in the context of Spinoza, and Erwin Goodenough regarding Philo. It is certainly plausible that Schwarz, in his somewhat popular biography, had chosen not to go into the academic depth that Scholem felt was lacking.

Scholem, after pointing out that Wolfson defined himself as “an unobservant orthodox” chose to end his review by discussing our very own “Morning Chapel Talk”. After presenting Scholem with the pamphlet and explaining how he had finally agreed to give the sermon, Wolfson said, “So I gave them this talk, you can read it now”.

Scholem recounted, “When I had finished he asked me, with a wily expression on his face: ‘What do you think it is that I like best about this piece?’ I must have looked helpless. He said triumphantly: ‘You see, nobody will ever know whether I believe anything or not’. Among the many characteristic and passionate sentences I have heard from Wolfson, this was certainly the most remarkable one.”

In fact, Scholem had written a draft of this concluding paragraph on one of the pages that he inserted into Schwartz’s book. There he described the booklet as a “curious bibliographical item” and characterized Wolfson’s stance regarding his successful concealing of his personal beliefs as “great pride”. In the final version, Scholem replaced “great pride” with “triumphalism”. I’m not sure which is worse but it appears that Wolfson’s seeming smugness regarding his own agnosticism also rubbed Scholem the wrong way.[4]

Thus a “curious bibliographical item” emerges as the tip of the iceberg of a complex relationship between two of the greatest Judaic scholars of the twentieth century, Wolfson of Harvard and Scholem of Jerusalem.[5]

[1] In the interest of fairness, we must admit that it is possible that the journal, and not Scholem, chose the title. Nonetheless, as we shall see, the title quite fits the content.

[2] The same personal style could have been viewed more favorably, such as in this quote from Wolfson’s student Prof. Isadore Twersky, “He was reminiscent of an old-fashioned gaon, transposed into a modern university setting, studying day and night, resisting presumptive attractions and distractions, honors and chores”. “Harry Austryn Wolfson, 1887–1974”, Journal of the American Oriental Society, 95 (2), pp. 181–183.

[4] Scholem’s caustic review did not go unanswered. Prof. Judah Goldin, in a long rebuttal, entitled “On the Sleuth of Slobodka and the Cortez of Kabbalah” (The American Scholar, vol. 49, Summer 1980, pp. 391-404) took Scholem to task for what he believed to be unreasonable criticisms of both Wolfson and Schwartz. To the best of my knowledge, Scholem did not respond. This debate is mentioned briefly by Yaacob Dweck in his article “Gershom Scholem and America”, New German Critique, 132, (2017), pp. 61-81.

[5] Scholem did contribute an article to the Hebrew section of Wolfson’s Jubilee Volume, which appeared in Jerusalem in 1965, pp. 225-241.

The Gershom Scholem Archive has been reviewed and described thanks to the generous support of The Leir Foundation.