Introducing Naamah, the “Mother of All Demons” 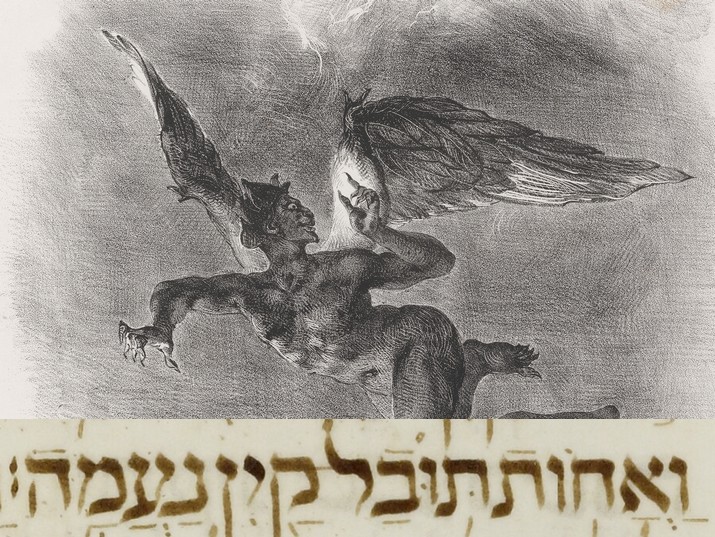 Four demonic mothers are mentioned in Jewish magical and Kabbalistic texts: Lilith, Naamah, Igrat and Machalat.  Only one of these, however, is dubbed the “mother of all demons,” and described as the mother of Ashmedai, the prince of demons. This would be the figure named Naamah—which happens to be a fairly common name among women in modern Israel.

Unlike the more famous Lilith, little has been written about Naamah. In this short article, we will try to review what we know of her and the beliefs and traditions surrounding her character.

Her name first appears in the fourth chapter of the book of Genesis. The text describes her as the daughter of Lamech and sister of Tubal-Cain, a member of a dynasty that originated with the infamous Cain, who murdered his brother, and continued with Enoch, himself a fascinating figure who “was no more, for God took him”, and who is sometimes associated with the angel Metatron. Like Enoch and the rest of his family, not much is written about Naamah in the Bible, a fact that has enhanced the sense of mystery surrounding her figure,  and which led storytellers through the ages to embellish her character with various biographical details. According to one midrash, Naamah was the wife of Noah. Another interpretation has her as the wife of one of his sons. Yet other traditions identify Naamah with another woman altogether. We will return to those a bit later.

In the same midrash that mentions the marriage of Naamah, sister of Tubal-Cain, to Noah, the sages also give two seemingly contradictory origins of Naamah’s name. Some believed that the name was given to her because “all her deeds were pleasant [ne‘imim]” while the other interprets her name as “she would beat [min‘emet] on a drum to draw people to idol worship” (Bereishit Rabbah, 23). Another midrash states that Naamah was so beautiful that she was responsible for the incident mentioned in Genesis 6: “The sons of God saw that the daughters of humans were beautiful, and they took wives for themselves, whomever they chose.” In other words, claims the midrash, Naamah was one of the daughters of humans that caused the angels to descend to earth and to fornicate with them.

Her demonic character appears more clearly in the Zohar Hadash.

Yitshak said “Why is it written And the sister of Tubal-Cain was Na’amah?”

Well, Rabbi Yitzkak said , “She was a righteous woman and pleasing [ne’imah], in her deeds.”

Rabbi Bo said, “She was the mother of demons; she bore them. For look, the mother of Ashmedai, king of the demons, is named Na’amah“

Evidently, there were two different traditions concerning the character of the biblical figure Naamah. The difficulty here is clear; it is, after all, impossible that Noah, “a righteous man, blameless among the people of his time,” would marry a woman who became the mother of demons. Adding to the difficulty is the fact that in chapters 4 and 5 of the book of Genesis are two different lineages in which the names of Enoch and Lamech appear. Noah himself, according to the book of Genesis, is the son of Lamech—which, as we recall from the verses mentioned above, is the name of Naamah’s father. Apparently, it was difficult to reconcile the traditions, hence in later versions the characters split, and so Noah married another Naamah – Naamah the daughter of Enoch – a much more logical relationship, given the sacred nature attributed to Enoch over time. She is said to be the only woman in the generation of the flood who maintained her purity. If so, are these really two sides of the same Naamah, or are these two different women called Naamah—one “pleasant” and one an idolater? One a righteous woman and one a beautiful temptress? We have no definitive answer for now, so we will continue to examine the demonic version.

As we mentioned above, the demonic Naamah is called the mother of demons, and she is identified in particular as the mother of Ashmedai. Other stories give other genealogical details: sometimes Naamah is the wife of a demon king named Shamdon, and sometimes of other demons. Sometimes she is the mother of Ashmedai and sometimes of demons with different names. In any case, her name appears in quite a few genealogies of demons, such as: “Hanad begat little Hanad and took as his wife Naamah and she gave birth to Bilad and Bilad ruled from the seed of Ashmedai in the year four thousand eight hundred and forty to [the] Creation . . .” (Gershom Scholem in “New Contributions to the Discussion of  Ashmedai and Lilith” [Hebrew]).

Rabbi Bahya ben Asher wrote the following about the four demon mothers, among them Naamah, in his commentary on the Torah (Genesis 4):

The gathering on the mountain is perhaps reminiscent of stories from European folklore about witches who would gather for communal celebrations at certain times of the year. Interestingly, the sages did divide the year into four periods, beginning in the months Tishrei, Tevet, Nissan and Tammuz. However, I have not been able to determine which demon is responsible for which period.

Naamah and Lilith appear quite often side by side in various writings. Like Lilith, Naamah’s main task was to seduce men in their dreams. In addition, she was Lilith’s accomplice in strangling babies. It is said that Naamah’s abode was in the depths of the sea. For example, in his Book of Mirrors (Sefer Mar’ot Hatsov’ot), David Ben Yehuda Hahasid (grandson of Nahmanides) writes: “And Naamah exists to this day, and dwells in the depths of the great sea and emerges and trifles with humans and seduces them in their dreams . . .” From there she would set off on her night journeys in the minds of human beings.

In the Zohar, it is written:

Rav Shimon: She [Naamah] was the mother of demons, having issued from the Side of Cain and was appointed together with Lilith over children’s diphtheria.

The demons Lilith and Naamah are considered so evil and frightening that they  are commonly identified as the two harlots (in other versions they are Lilith and Igrat) who seek a judgement before King Solomon in their quarrel over the child they each claim as their own, as described in 1 Kings 3.

The Jewish sages have not been able to reconcile the various traditions about Naamah’s character, and we will certainly not pretend to do so. Whether it was one Naamah or two, it’s always better to be on the alert…

Prof. Gideon Bohek and Prof. Yuval Harari assisted in the writing of this article. Special thanks to Prof. Elhanan Reiner for his help with research and writing.