Though England's royal coronations are traditionally held at Westminster Abbey, over the years the Jews of the British Empire have celebrated the ascensions of new monarchs in their synagogues, with special prayers tailored for the occasion… This year (2022) the United Kingdom and much of the world is celebrating Queen Elizabeth II’s Platinum Jubilee, marking her 70th year on the royal throne. Though she became Queen in 1952, her official coronation was held more than a year later, to allow the nation to mourn the death of her father, King George VI, as well as to allow time to prepare a magnificent ceremony.

To mark the momentous jubilee, the UK’s Chief Rabbi composed a special prayer for the occasion.

This, however, was certainly not the first time the Jews of England have prayed for the well-being of their respective kings and queens. Ahead of royal coronations held over the years, special prayers were prepared for Jewish congregations and read in synagogues across the British Empire. These prayers and rituals were published by the Chief Rabbinate as well as other Jewish organizations. Many of the resulting prayer books are preserved today in the collections of the National Library of Israel.

The obligation to pray for the safety and well-being of kings is rooted in a verse from the Mishnah – Pirkei Avot, 3:2:

Rabbi Chanina, the deputy Cohen Gadol, says “Pray for the welfare of the government, because if people did not fear it, a person would swallow their fellow alive.”

(The above translation is taken from here)

The hope conveyed in the words above is that a proper and effective monarchy, meaning one that is not preoccupied with wars and infighting, is more likely to invest its resources and time in good governance, legislation and public order, for the benefit of its subjects, including Jews.

To this day, in Jewish congregations in Britain and the Commonwealth countries, a prayer for the blessing and health of the Queen and the Royal Family is recited before the Musaf Shabbat prayer.

Victoria’s coronation was held in 1838, a year after she acceded to the throne. 50 years on, the Chief Rabbinate and the kingdom’s Sephardic community published prayers giving thanks for the protection afforded to the Queen “during a long and prosperous reign”.

A decade later, Queen Victoria celebrated her 60th year on the throne. Prayers were renewed and even the Jews of Jerusalem published a Hebrew song of prayer, citing “the children of Israel who dwell in Zion and who appreciate your feelings and take part in your joy and in the happiness of your peoples”.

Victoria’s son and heir, Edward VII, was crowned along with his wife Queen Alexandra in 1902. Once again, in England, Australia and other countries, prayer books containing psalms, hymns such as Adon Olam, special prayers for the protection of the new king and queen as well a general prayer for the safety of the Royal Family were printed. One of the books included the last-minute addition of a thanksgiving prayer in Hebrew on its final page, noting that “the sword hath been put into the scabbard, and the covenant of peace and brotherhood hath been established”.

The coronation was held about a month after the conclusion of the Second Boer War in South Africa. The Chief Rabbinate felt it was fitting to address the issue during the coronation celebrations.

A Hebrew “Ode on the Coronation of His Most Gracious Majesty Edward VII” was also composed and translated into English and Yiddish. The author, Joseph Massel, had immigrated to Britain from Russia in 1895. He settled in Manchester, where he worked in printing and translation while writing poetry as well. A passionate Zionist, he took part in the Zionist congresses and even hosted Chaim Weizmann in his home.

The next coronation was that of King George V, alongside his wife Queen Mary in 1911. Aside from the more common prayers printed in London, here we have examples of prayers published in distant parts of the British Empire, such as the cities of Bombay and Calcutta in India.

George V was eventually followed by his son King George VI and his wife Queen Elizabeth in 1937 (Edward VIII was George V’s immediate successor but abdicated before his coronation could be held). Yitzhak Ben Zvi and Rachel Yanait represented the Jewish Yishuv of Mandatory Palestine at the ceremony.

In this case as well, a variety of brief prayer books were printed. One of these hailed from Tianjin (Tientsin) in northern China, where a community of some 2000 Jews, mostly refugees from Russia, had settled. 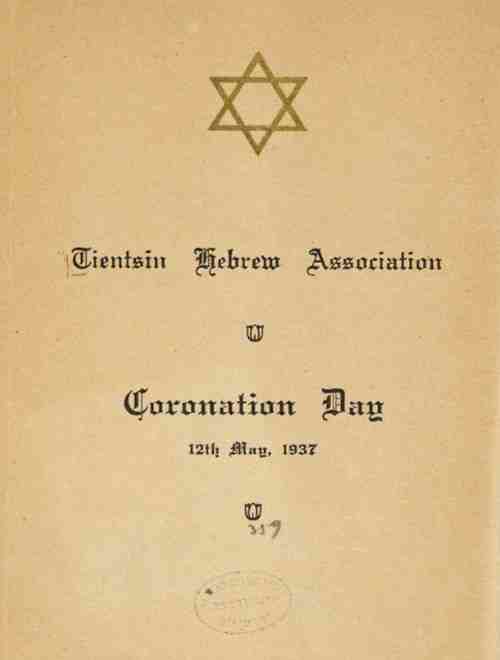 This was the first appearance of Elizabeth II in the coronation prayers, though here she was still a princess. Elizabeth was 11 years old when her parents were crowned, and the prayers made reference to her as well. She also appeared alongside her sister Margaret in official photos of the event.

In the Land of Israel, a “Grand Coronation Ball” was organized to celebrate the event. According to the official programme, primarily filled with advertisements, the ball featured three orchestras, and participants were able to enjoy dances, catering and a fireworks display.

With the passing of George VI in 1952, Elizabeth II was made Queen. Her mother, also named Elizabeth, now became “The Queen Mother”. The official prayer published by the Chief Rabbinate for the 1953 coronation ceremony features a minor, understandable, mistake. The booklet was printed while Elizabeth’s grandmother, Queen Mary, was still alive and her name appears among those of the other Royal Family members. Mary passed away little more than two months before the official coronation and there was no time to reprint the booklets.

That same year, the Jewish National Fund planted a forest near the town of Nazareth in honor of the Queen with funds donated from around the world. To mark this occasion, an elegant book was produced, featuring a poem dedicated to Queen Elizabeth II, as well as an article on the subject of the Royal Family and the Jewish people and another article on the topic of forestation and agriculture in the Holy Land. The book also included several photographs of yet another forest planted in honor of George V in 1935.

To mark Elizabeth II’s Silver Jubilee, celebrating 25 years on the throne, a special prayer service was held at the central synagogue of the United Synagogue organization, with the Chief Rabbi in attendance along with other dignitaries. After the Rabbi’s sermon, the Holy Ark was opened and the cantor recited:

Five and twenty years have passed since our Gracious Queen ascended the throne. In common with our fellow citizens we pray humbly that Her Majesty will be granted many more years of fruitful and felicitous reign that will continue to shed lustre and glory upon our Sovereign and her people.

Our Father Who art in Heaven,

Bestow Thy bountiful blessings upon Her Majesty the Queen and Prince Philip, upon the Queen Mother and the Prince of Wales. Wonderful in their splendor, may they be richly blessed together with all the Royal Family. Prolong their years in health, well-being and strength…

In this year of joyful remebrance and exultation we are filled with the deepest sentiments of loyalty, esteem and gratitude. We pray for the peace and prosperity of Great Britain, for the security and salvation of Israel and for the redemption of mankind under the sovereignty of God.

May our prayers and supplications find speedy and abiding fulfillment.

And with that, all that is left is to wish Her Majesty health and happiness.

God save the Queen.