Harry Graf Kessler and the Biography of Walther Rathenau

The writing of a biography of this Jewish statesman, by a Christian, no less, cannot be taken for granted 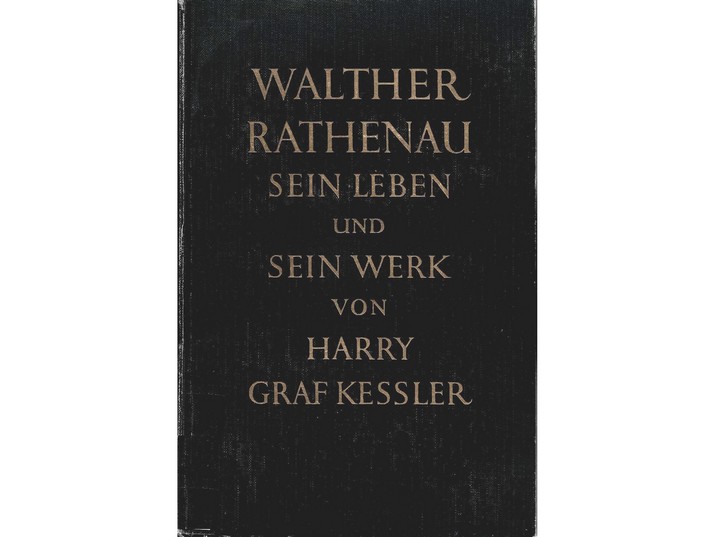 The cover of Walther Rathenau's biography by Harry Graf Kessler, 1928

The year 1928 saw the publication of a comprehensive biography of Walther Rathenau, a Jewish industrialist who served as Foreign Minister of the Weimar Republic until his murder in June 1922. Although Rathenau was a key figure in the last days of the German Empire and during the first years of the Weimar Republic, the writing of a biography of this Jewish statesman, by a Christian, no less, cannot be taken for granted. The biographer was Harry Graf Kessler (1868-1937), and the book sold well. Within a short time, two editions were printed in German, as well as translations into Dutch, English and French. The picture of Rathenau’s life as presented in the biography is today considered reliable and important, in part because the author knew the Jewish politician and was in direct and ongoing contact with him during the first years of the Weimar Republic. Who was Harry Graf Kessler? What caused him to delve into Rathenau’s life story in such an intensive manner?

Harry Kessler was born in Paris to a German banker and his Irish wife. During his early years, he lived in the city of his birth, where he attended a French school. Later, he studied for several years in England, and ultimately, took his matriculation exams in Germany. Thus, from a young age, Kessler had a good command of several languages and had the benefit of a diverse education. Following his matriculation exams, Kessler enrolled in law school. Shortly afterwards, he served in the German military. Due to his noble lineage, he was assigned the job of officer in an elite battalion, and naturally, he encountered no difficulties in his path to a career as a senior clerk in the German government. In addition, the Kessler family’s personal acquaintance with the imperial family and Chancellor Otto von Bismarck was certainly helpful in the advancement of the ambitious nobleman. And yet, this young jurist was not satisfied with a career in public administration, but developed a clear proclivity for culture and the arts

In the last years of the 19th century, the art journal, Pan began publication in Germany. Among the editors were well known and influential artists; Count Kessler also played a role. The journal stood out for its attractive design, high-quality printing standard, and innovative content. To this day, Pan is considered to have been a trailblazer in the Art Nouveau style. Kessler’s close acquaintance with the world of art and his refined aesthetic sensibilities lead him to establish a private artistic press known as Cranach-Presse in the city of Weimar. During the first decade of the 20th century, Harry Kessler was appointed director of the Museum of Arts and Crafts in Weimar. During this period, he was also close with several important poets in Germany, such as Rainer Maria Rilke and Hugo von Hofmannsthal. Together with von Hofmannsthal, he composed the libretto for the well known opera Der Rosenkavalier by Richard Strauss.

During the early years of the Weimar Republic, Harry Kessler was active in politics and diplomacy, advanced Germany’s membership in the League of Nations (precursor to the UN) and even was a member of the German-Democratic Party (DDP). Both as a member of this party and as a diplomat, Kessler maintained contact with Walther Rathenau, who, for his part, beyond his activity as an industrialist and politician, was also interested in cultural and artistic matters. At the same time, other items in Kessler’s detailed diaries reveal that while the relationship between the two was one of respect, they did not share a feeling of mutual appreciation. Despite this, Rathenau’s murder in June 1922 shocked Kessler deeply, and also undermined his belief in the possibility for the development of a true democracy in Germany. A number of years later – after Kessler tried (to no avail) to run for the German national parliament, the Count abandoned his political aspirations and devoted most of his time to artistic activities at the press and to writing, among other things, the biography of Walther Rathenau.

During the preparatory research, Kessler interviewed acquaintances of the murdered man as well as many of his family members, and even corresponded with a number of individuals who knew the Jewish politician. One of his correspondents on the matter was the philosopher Martin Buber. Buber’s archive at the National Library includes a file containing handwritten and typed letters from Kessler. Kessler wanted to know to what extent Rathenau had been interested in Hasidic ideas. During the late 1920s, Buber was already considered an expert in the mystical-Hasidic tradition, and therefore, Kessler approached the scholar, who also had been in personal contact with Rathenau. After reading some of Rathenau’s early compositions, Kessler ascertained that he had been influenced by Hasidic ideas, and Buber indeed confirmed this in a letter to Kessler, and even agreed that the latter quote from the letter in its entirety in Rathenau’s biography.

Rathenau’s personal connections with Count Kessler on the one hand, and with Buber on the other, were not Rathenau’s only ties with well known Jews of his time. Albert Einstein was also among Kessler’s acquaintances, together with many other figures. His fascinating diaries contain no fewer than 12,000 names of individuals from the period, which makes them a first-rate historical-cultural resource on the history of Central Europe from 1880-1937. Count Kessler left Germany with the Nazi rise to power and lived out his days in France and Spain.

Dear Herr Doktor,
Your “Hasidic books” are of great benefit to me. They illuminate Rathenau’s world view on a particular point in a very interesting manner. Might you allow me, without transgressing the boundaries of privacy, to ask if you ever had direct contact with Rathenau, and if you spoke with him about Hasidism, or if you are aware that he took an interest in Hasidism? His character was such that he did not easily accept outside influence, but I have almost no doubt that he was familiar with Hasidism and that its teaching influenced his world view. However, it is of utmost importance to me to base this assumption on facts of some kind.