Rathenau was a classic example of a German Jew who tried to become integrated into society-at-large, and even contributed to the strengthening of nationalist views 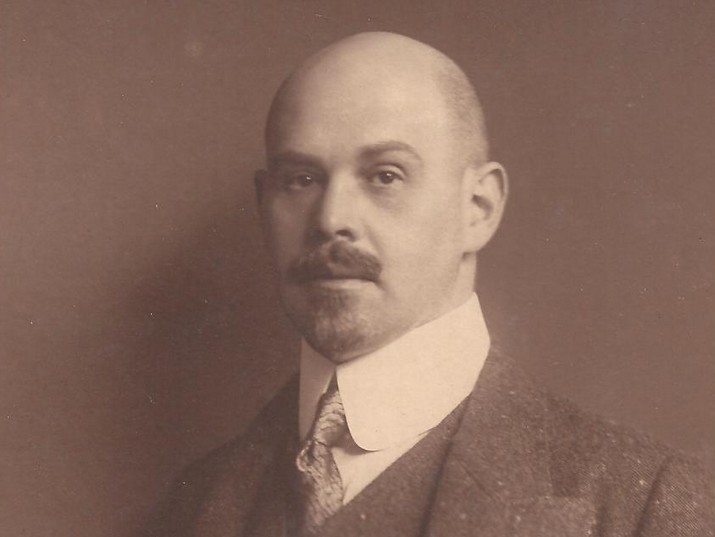 Walter Rathenau (1867-1922) was born in Berlin to a prominent Jewish family. His father was the well-known industrialist Emil Rathenau, the founder of AEG. Walter studied physics, chemistry, philosophy and engineering, and after completing his studies he was integrated into the management of his family’s business affairs. In 1912, Rathenau was appointed Chairman of the Board of AEG, and was on many other boards of leading industrial companies. Due to AEG’s specialization in electrical appliances and technical equipment, Rathenau played an important role in logistical planning, supply of raw material, and industrial contributions to the German war effort. Rathenau was officially appointed by the German War Ministry to be responsible for supplying raw materials to the country’s military industry.

During the war, Rathenau’s open support of Germany grew stronger, and he even demanded that harsh actions be taken against Germany’s enemies. After the war, Rathenau was appointed Minister of Reconstruction and then, in the end of January 1922, he was appointed Foreign Minister of the Weimar Republic. To this day, this is the highest position that a Jew has ever filled in a German government. Just six months later, while on his way to the office, Rathenau was assassinated by extremist right-wing activists.

The earliest documentation of the relationship between Rathenau and the Austrian author Stefan Zweig held in the National Library’s collections is from 1907. Rathenau greatly appreciated literature and art, and even tried his hand at writing. The two men were known to have met a number of times and exchanged views about art and politics.

Therefore, the background to the letter presented here from October 24, 1914 is not surprising. The French author Romain Rolland, a pacifist and activist against the war and supporter of aid projects for prisoners of war, had approached Zweig a number of days earlier with the idea of assembling a forum of European public figures from all fields and disciplines in order to work together against the “war madness”. Rolland asked Zweig to recruit additional people from among his acquaintances.

Zweig approached Walther Rathenau, among others, but in October 1914 the latter was no longer interested in preserving the peace, as illustrated in Rathenau’s reply. Rathenau was fully invested in his new post at the German War Ministry and did not want to relate to efforts to stop the war or discuss the activities of the German army in Belgium (the bombing of the city of Louvain) or in France (the bombing of the city of Reims), which had already horrified the world in the first months of the war.

Zweig’s and Rathenau’s positions aptly illustrate a few of the possibilities from which German Jews, in their outstanding position, could choose. Zweig was never enamored of war, and certainly not of the nationalist phenomena that were very common in almost every country that fought in World War I. He saw himself as a citizen of the world, and fervently believed in the capabilities of European culture.

In contrast, Rathenau was a classic example of a German Jew who tried to become integrated into society-at-large, and even contributed to the strengthening of nationalist views. Like his father, as well as the tradesman and collector James Simon and the shipping magnate Albert Ballin (all Jews), Walter Rathenau was friendly with Kaiser Wilhelm II. Like the others, Rathenau even served as an informal advisor to the Kaiser. Nonetheless, this role as well as his political positions during the first years of the Weimar Republic did not ultimately protect him from extremists and anti-Semitism. Herein lies the tragedy of Walter Rathenau and other figures from this period, who, in the eyes of Germany’s extreme right, would always remain first and foremost Jews and as such, the enemy of the German people. 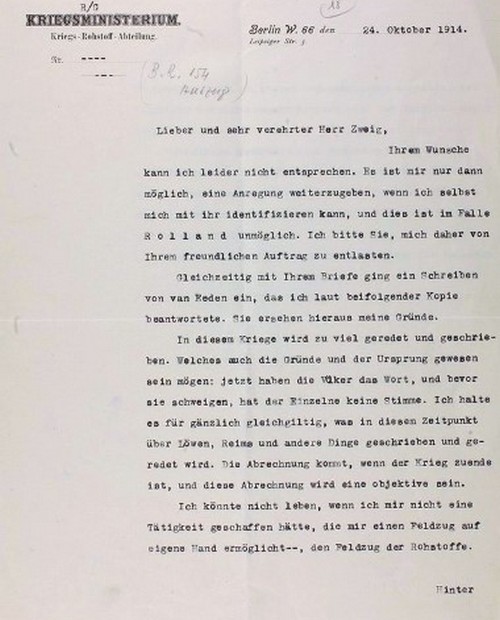 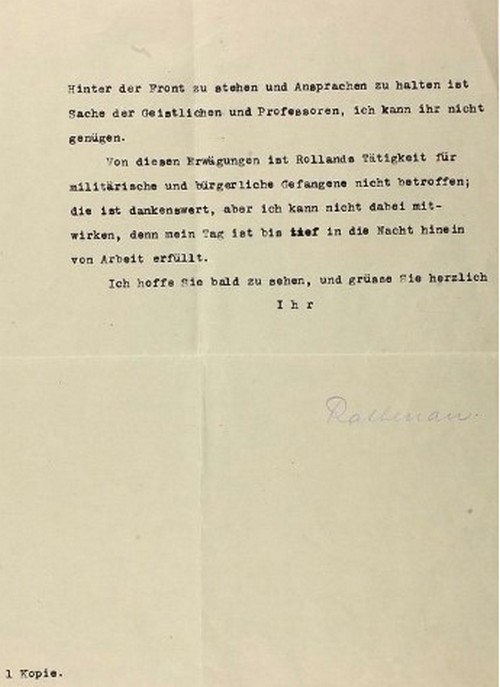 To the Honorable Mr. Zweig,
Unfortunately, I am unable to fulfill your request. I am able to convey an idea only to the extent that I identify with it, and this is not the case regarding Rolland’s matter. I therefore request that you absolve me of the burden of carrying out your endearing request.

Together with the letter, I received a letter from Von Aiden*, to which I have replied, as you will see in the attached. In it, you will see my arguments.

In this war, people speak and write too much. Be the reasons as they may: now the nations need to speak, and until they become silent – the individual has no word. In my view, what is written and spoken now of Louvain , Rheims and other matters is not important. The bill will be submitted when the war is over, and this bill will be objective.
I would not be able to live had I not created for myself a job that enables me [to wage] an independent battle – a battle that relates to resources. To stand behind the front and to give speeches, this is a matter for clergy and professors – I am unable to act thus.

Rolland’s activity on behalf of military and civilian prisoners is not tainted by these considerations. It is respectable but I am unable to join it, since my day is full of work that extends halfway into the night.

I hope to see you soon and bless you.