Mawlid al-Nabi: The Birth of the Prophet of Islam

Home > Islam > Mawlid al-Nabi: The Birth of the Prophet of Islam
Middle East

A look at the miraculous tales and sacred biographies of Muhammad, in honor of "Mawlid" 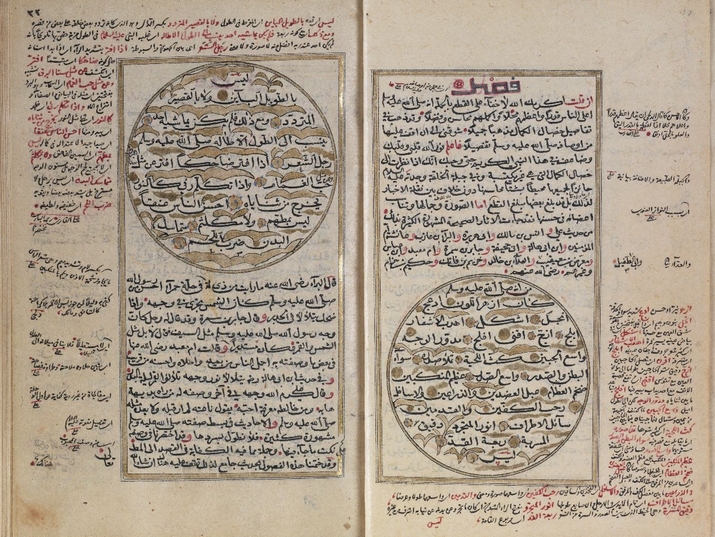 A 1746 Ottoman copy of Qadi Iyad’s Kitab al-Shifa, one of the most popular handbooks on the life of the Prophet Muhammad, with marginal glosses in Turkish, the National Library of Israel collections

The Quran tells us very little about the Prophet Muhammad’s life. Although the sacred text describes his revelation, his mission, and his relation to the long history of prophecy that preceded him, the events that make up Muhammad’s own biography appear at most as hints and allusions, passing references that follow no clear chronology; the Quran’s concerns, after all, lie elsewhere.

It was up to later generations of scholars to piece together the relevant Quranic passages and oral hadith traditions to reconstruct the Prophet’s biography. A critical question, among others, concerns Muhammad’s birth. When, where, and under what circumstances did that world-changing event in human history take place?

Today, Muslims celebrate the birthday of the Prophet Muhammad, Mawlid al-Nabi, on the 12th of the Islamic month of Rabi al-Awwal, which corresponds this year to October 29th. The holiday originated hundreds of years after Muhammad’s own birth in the sixth century; some of the earliest Mawlid accounts describe the state-sponsored celebrations held by the Ismaili Fatamid dynasty, which ruled Egypt and surrounding territories from 969 to 1171. Nonetheless, Mawlid observances, whether with family at home or with large public festivities, are now common throughout the world.

One of the central elements of many Mawlids, historically and today, is the recitation of narratives describing the ancestry, birth, and early life of the Prophet. The earliest biographies of Muhammad, such as Ibn Hisham’s (d. 833) recension of a work, now lost, by Ibn Ishaq, already describe the birth as a miraculous event. For instance, Ibn Hisham includes a tradition that the Prophet’s mother Amina had a visionary experience during her pregnancy. However, the early biographers are much more interested in describing Muhammad’s military victories than his birth, and birth narratives play a minor role in their accounts overall.

True Mawlid texts have a far different orientation. Abu al-Hasan al-Bakri’s Kitab al-Anwar (the Book of Lights), one of the earliest and most influential of such works, is a representative example. Almost nothing is known of the author himself, though he must have lived sometime before the end of the ninth century CE. Al-Bakri’s entertaining and dramatic work recounts gripping scenes and extensive dialogue even when such descriptions have no basis in earlier sources. The work’s main subjects are the preexistence of Muhammad’s divine light before creation and its passage through the generations, as well as his birth and infancy. Kitab al-Anwar concludes with Muhammad’s marriage to his wife Khadija; his revelation, prophetic mission, victories, and leadership are not mentioned at all. Kitab al-Anwar, like later works written in its model, “reflects the devotional reframing of the Prophet’s life,” as Marion Holmes Katz has written, “in which priority is accorded to his major life-cycle crises, rather than to his public career as the Messenger of God.”

Al-Bakri’s account of the birth itself, for instance, is narrated from Amina’s own perspective. A white bird rubs against her heart, removing all the pains of labor, and she drinks a miraculously-appearing white liquid that causes light to shine from her. Women bearing perfume and angels appear. Then, after the birth, clouds descend twice to take the infant: once he returns having traveled across the entire world, and the second time he is presented to all earlier prophets and blessed with a quality of each. Finally, Ridwan, the guardian of paradise, arrives and stamps his shoulder with the seal of prophecy.

Kitab al-Anwar was quite popular; reports abound of the book circulating widely in medieval book markets. However, al-Bakri also attracted the ire of scholarly authorities. Among others, the important historian and Quran commentator Ibn Kathir (c. 1300-1373) denounced him saying “the lies produced in al-Bakri’s sira are an offence and a grave sin; their fabricator has fallen into the category of those warned by the prophet: ‘He who reports lies about me deliberately shall be condemned to Hell.’” Today as well, Mawlid narratives, and the celebration of the Prophet’s birthday overall, are condemned as unlawful innovation in certain corners of the Islamic world.

The Islam and Middle East collection of the National Library of Israel is home to over a dozen manuscript copies of and commentaries on another of the most popular works on the life and birth of the Prophet Muhammad. This is the Kitab al-Shifa bi Ta’rif Huquq al-Mustafa (“The Remedy by the Recognition of the Rights of the Chosen One”), written by the scholar and jurist Iyad ibn Musa al-Yahsubi, known as Qadi Iyad. The son of a prominent scholarly family, he was born in the North African city of Ceuta in 1083 and pursued his studies there and in Muslim Spain. Iyad served as a judge (qadi), and authored numerous works on Hadith, law, biography, and history.

The Kitab al-Shifa is arranged by topic, collecting sources from the Quran and Hadith on the Prophet Muhammad, along with the author’s commentary, on various themes. For example, different sections are dedicated to God’s kindness and gentleness toward Muhammad; the Prophet’s matchless character, intellect, and physique, as well as his ability to predict the future. Rather than a traditional biography, the Kitab al-Shifa is more of a handbook of traditions and remains a popular devotional text.

This is true of the chapter devoted to Muhammad’s birth as well, in which Qadi Iyad collects stories stretching back to al-Bakri and other sources. Iyad recounts how a light that outshined the stars in its brilliance issued from the Prophet when he was born; how because of his presence, his wet-nurse Halima always had abundant milk for him, and her animals were fertile and abundant as well; and how those who ate with him were never left unsatisfied. As befits a man who would change the course of history, all of nature and the works of man convulsed at his arrival. As the translation of Aisha Abdurrahman Bewley puts it:

These are the wonders that took place on the night he was born: the arcade of [the Persian emperor] Khusrow shook and its balconies fell down, the waters of Lake Tiberias ebbed, and the flame of Persia, which had not been put out for a thousand years, was extinguished.