About a year after the renowned scholar's Talmud set finally found its way home, his Mishna has too... 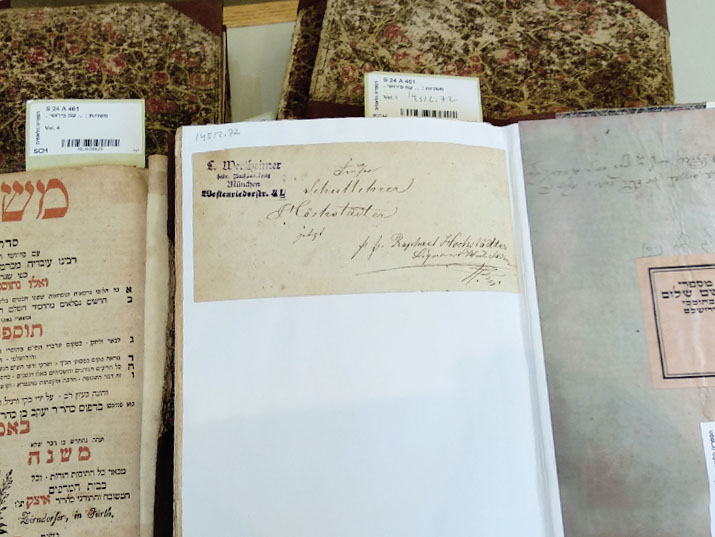 A few years ago, after a number of unexpected wanderings, Gershom Scholem’s Talmud set finally came home to the National Library of Israel in Jerusalem. Now, following a somewhat less dramatic though still interesting saga, his set of the Mishna has come home, as well.

When Scholem came to the Land of Israel from Berlin in 1923, he typed up a list of all of the books that he brought with him (more than 1,700!). The list can be found in his archive at the National Library.

His Mishna set appears as numbers 10 and 11 in the category of “Hebraische Literatur” (“Hebrew Literature”). Numbers 2-6 indicate that the Babylonian Talmud he brought was not a complete set from a single publisher, and it seems that he did the same with his Mishna, bringing three volumes (though he didn’t indicate which) from an edition published in Amsterdam in 1685 and one volume, Seder Kedoshim, printed in Fürth in 1814.

He came with only four of the six total Orders of the Mishna.

From there the story becomes less clear.

Shortly after he passed away in 1982, most of his personal library came to the National Library, where it remains largely in the same order as it was in his apartment.

Yet, for years, his Mishna was not to be found in the Gershom Scholem Collection at the National Library. In its place stood another set from the Library’s collections.

It seems that after he passed away, his Mishna – along with other books – remained with his wife Fania in their home.

A few months ago, I was contacted by someone at Midreshet Beer, a women’s seminary in Yerucham, who asked an intriguing question.

She told me that the seminary had recently received a number of donated books and among them was a Mishna set with the ex libris of Gershom Scholem. She asked if we would we like to have it.

Of course I said, “Yes,” and inquired further.

It turned out that the set had belonged to a couple who had lived on Kibbutz Saad in the Western Negev. After they passed away, their children decided to donate many of the books they found in their home to the seminary.

I spoke with the couple’s daughter who had no idea how her parents had gotten the set. She didn’t think that they had had any connection to the Scholems, though it certainly seems possible that perhaps they knew Fania and received the books from her.

Or maybe the volumes had other stops along the way…

In any case, the set, published in Fürth in 1814, is complete (six volumes) and in outstanding condition, though it is clear that not all of the volumes were used by the same people…

I believe that when Scholem got to Jerusalem he sold the three older, more valuable Amsterdam volumes that he had brought with him and purchased the volumes he needed to complete his Fürth set.