A Dragon from the Land of Israel?

Stories about dragons usually lead us to dark caves in Europe, but one classic dragon-tale may have its ancient roots right here, in the Land of Israel 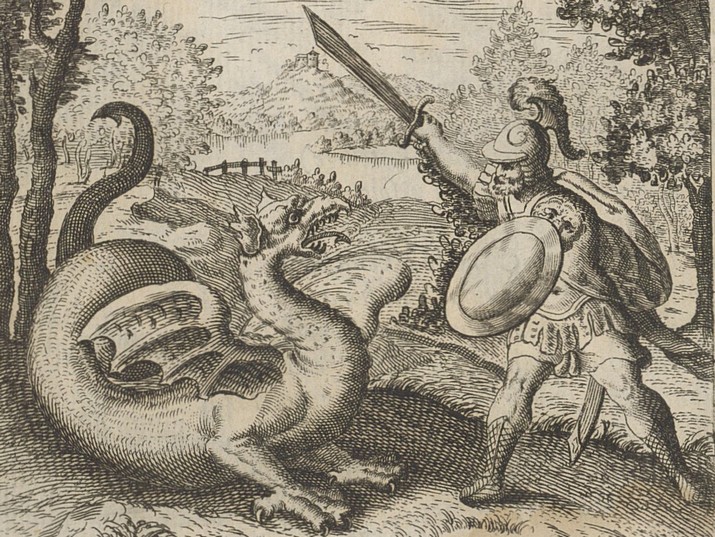 Did you know that at least one dragon can be linked to the ancient Land of Israel? Usually, the mention of dragons evokes scenes of knights in armor and towering castles; in short: European folktales set in European landscapes. The tales generally feature a maiden in distress, a dragon threatening the locals, and a brave knight who comes to the rescue, slays the dragon and saves the maiden as well as the town and its grateful residents. Occasionally, the knight is also rewarded with a great treasure along the way. While there are many such stories in world folklore, one of the most famous in Christian mythology and Western culture is associated with the Land of Israel. Or more precisely, with the city of Lod (Lydda).

There are many versions of the story of Saint George and the Dragon, a classic dragon tale, with some even contradicting each other. It begins with a man named Geórgios (George), born to a Christian family of Greek descent. His father was from the Cappadocia region of modern-day Turkey, and his mother was born in Lod in the Land of Israel, then known as the Roman province of Syria Palaestina. George’s father died when his son was still in his teens, and so the youth and his mother returned to Lod, where he grew up, until he joined the Roman army. Saint George met his end, as did many Christian saints, when he was beheaded by the Romans, who persecuted him for his Christian faith.

The legend of Saint George and the Dragon first appeared much later, in the 11th century. Various versions of the story situate the battle with the dragon in Libya or Turkey. But we don’t mind believing that version that places the events in Lod, which is traditionally Saint George’s final resting place. According to the tale, a fearsome dragon terrorizing the region demanded gifts and offerings from the locals as appeasement. According to some accounts, the dragon lived in a lake or swamp, and had the power to poison the water sources. Its hunger was insatiable, and every day the villagers provided it with two sheep. When they had exhausted the supply of farm animals, they turned to human offerings. This continued until one day, the beloved local princess was chosen as the dragon’s next victim. Although her father the king offered all his riches and gold, no one agreed to take her place, quite understandably.

Here is where our hero George enters the story, passing by on his white horse by chance, and armed with his trusty lance which he named “Ascalon”, after the city known as Ashkelon in modern-day Israel. The doomed princess tried to persuade him to flee, but George vowed to stay by her side. When the dragon appeared, he stabbed it with the lance, mortally wounding the great beast. George asked the princess for her sash, which he then used to loop around the dragon’s neck. The dragon was tamed as soon as the sash touched its scales. The princess and the gallant knight then proceeded to march it through the city streets.

At this point in the story, the various versions cast George’s character in slightly different lights. According to one version he agreed to kill the dragon on condition that the city’s inhabitants convert to Christianity, which they did. Another tells that he killed the dragon, and then distributed the money he received from the king to the poor. The stunned peasants converted to Christianity. In any case, the miraculous story, alongside George’s military career, made him a very popular figure in Christendom as well as a patron saint of soldiers, archers and cavalry, and an ideal exemplar of the myth of the Christian knight.

He is also the patron saint of England (whose flag bears “The Cross of Saint George”), Georgia, Ethiopia, Lithuania, Greece, the Palestinian Authority, the provinces of Catalonia and Aragon in Spain, the cities of Moscow and Istanbul and many other places. The city of Lod has also commemorated his name, naturally. According to tradition, George’s decapitated head was brought to the city, where it is buried in the Church of St. George the Dragon Slayer. Every year on November 16 (according to the Gregorian calendar), a feast is held in the city of Lod to commemorate the transfer and burial of his head there.

And if, on your next visit to Lod, you fail to find any dragons, do not despair! You can find some here at the National Library of Israel in Jerusalem. We have included a few different specimens from the Library’s holdings throughout this article: dragons that appear on antique maps, dragons in old scientific texts, in illustrated manuscripts and even a three-headed dragon from a book of alchemical secrets. And this is just a small sampling of the many dragons hiding here among the stacks and shelves. Browse through the National Library catalog to find more!