When Ice Cream Was Forbidden in the Land of Israel

Why were the residents of Mandatory Palestine banned from eating ice cream for three whole years? 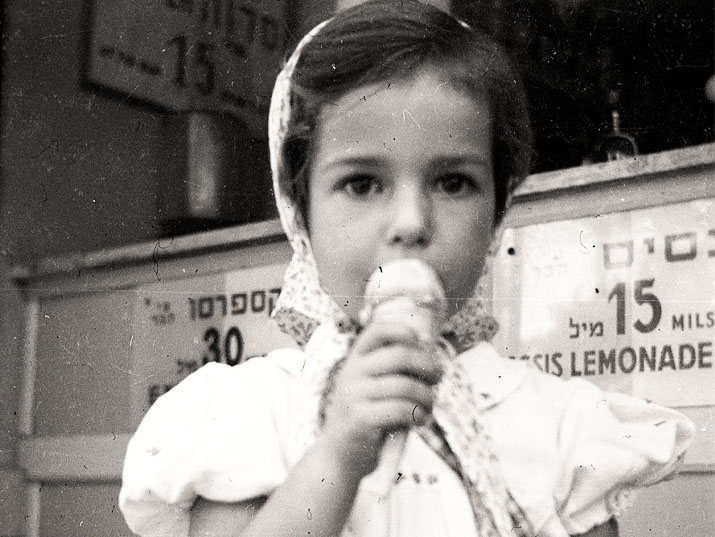 In the spring of 1942, headlines in all the English, Hebrew and Arabic daily newspapers in Mandatory Palestine announced the local banning of all production, sale and distribution of ice cream beginning on May 1. Residents would no longer be able to enjoy an ice cream cone by the beach or a scoop next to a warm piece of chocolate cake in the local café. They would have to make do with the various “inferior” products – fruit popsicles and sorbets. No more chocolate, vanilla and pistachio. From now on there was to be only lemon, grape and pineapple.

The reasons for this harsh decree were related to World War II, then at its height, with the fighting fast approaching the borders of the Land of Israel. German forces under Field Marshal Erwin Rommel, the “Desert Fox,” were rushing across the sands of North Africa, threatening to occupy Egypt, where British forces were stationed. In Mandatory Palestine, preparations were underway for the possibility of a Nazi invasion. In the event of such a disaster, the Jewish community even planned to hold a last stand defense on Mount Carmel.

But what does all of this have to do with a frozen dessert? Hadn’t the Jewish people suffered enough? Why did the Nazi threat prevent people in the Land of Israel from enjoying a bit of ice cream? The answer lies in the global shortage of raw materials. In fact, behind the ban was the British Mandate supply department. The large quantities of milk and sugar needed to make ice cream had more basic and pressing uses—at least in the eyes of the authorities. The ban on ice cream production was to remain in place until the end of the war. Bear in mind, in mid-1942 no one knew how long the war would last.

What about the public? It did not take easily to this ban. Despite the media’s attempts to convince citizens that non-dairy substitutes were just as tasty, not everyone agreed. It is true that other food products were also rationed, their production restricted and supervised during the war years, but the ban on ice cream may have just been the final straw. The restriction even caused a stir among the country’s foreign correspondents and journalists who reported on it to their readers back home. One of the reporters wrote of the disaster: “This is one of the worst adversities that the Holy Land has yet to experience.”

Others understood the need for belt-tightening in such difficult times. The Yiddish writer Zusman Segalowitch published a column in the newspaper Haboker the morning the ban went into effect. He wrote: “As of today it is forbidden to produce and eat ice cream.  This is an order. A law that we must obey, and especially at a time when such a struggle is being waged in the world. This is not a disaster, one can make do temporarily without ice cream . . . I am personally not a big fan even though I do not shy away from a sweet treat now and then. But in theory I think that ice cream is a very necessary thing, a good, sweet and useful thing, it is also an international thing, the only internationale [a play on The Internationale, the left wing anthem, as the ban took effect on May 1, International Worker’s Day], that has sweetness and peace.” Zusman continued with reminiscences about a café he had known in Poland that served fine ice cream, and about how people happily gather around a serving of ice cream. He tried to end his column on a hopeful note:

It is not a disaster that ice cream has been banned for now. It is just temporary. It is only because of the war, and the war is being waged precisely so that people can eat ice cream peacefully. The war will end and then people will once again find for themselves things that are comfortable and useful, and isn’t that the logic of life? People will have to find the true path of life, each person for himself, the way to beauty and the way to even tastier ice cream.

The earth’s bounty is full of goodness, fruits good to eat and beautiful to behold. Apples, pears, cherries, plums, bananas, grapes, almonds, apricots, and oranges. After all, the best and finest ice cream can be made from all these. And chocolate and cocoa, milk and cream—plenty of delicious ingredients for ice cream. And the wise will finally have to acknowledge, that the good things in the world belong to all, and with good will everything can be shared honestly. Everything for everyone!

The miser will wither like a dry stalk atop the pile of gold he has accumulated. But trees will bloom and blossom, the earth will provide food, the sun warmth. And people will once more taste ice cream… all will be good again.

The ice cream shortage evoked not only philosophical reflections but also more practical matters. April 30th, 1942, the last day before the ice cream ban went into effect was a very busy one in cafés and ice cream parlors. “Unusual traffic in cafés,” the newspaper Hamashkif reported, referring to the “lickers” who took advantage of the last chance to bid farewell to ice cream.

Naturally, a measure such as this required a period of adjustment. Various merchants attempted to continue producing ice cream with the meager means at their disposal, in addition to the fruit sorbets, whose production continued as usual. Others apparently engaged in unlawfully profiting from the raw materials used to make ice cream, and some were tried for it in court. Added to these complexities was the fact that the British Army and the other armies that fought alongside were still allowed a constant supply of all types of ice cream.

It is worth noting that the prohibition justified itself. According to reports, the authorities predicted that already in the first week of the ban, 400 tons of sugar and about 600 tons of milk would be saved. The amount of sugar was approximately equal to the amount supplied to all of Tel Aviv for five full months.

Eventually, as everyone knows, World War II came to an end with the Allied victory over the Nazis and their accomplices. The final stages of the war saw the lifting of the draconian ban on the production and sale of ice cream in Mandatory Palestine. Contrary to what one might expect, the return of ice cream was not met with spontaneous dancing in the streets. As early as February 1945, newspaper editors made do with brief reports, consisting of 2 or 3 lines of text, to notify their readers that ice cream could again be consumed in the Land of Israel. A few months later, when Nazi Germany was finally defeated, the Kfar Saba municipal council decided on a fitting celebration, distributing 1,000 free ice creams to local schoolchildren. With peace restored, people could enjoy the taste of real ice cream once more.

Nati Gabbay took part in the preparation of this article.