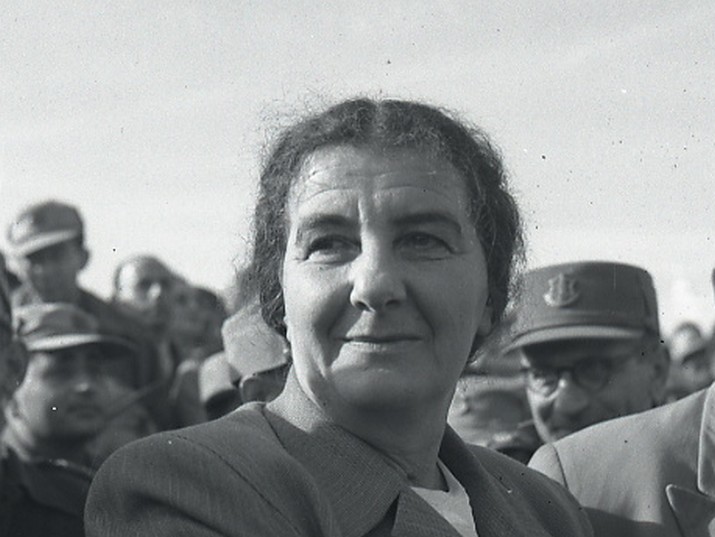 On March 17, 1969, something momentous happened in Israel: Golda Meir was appointed Prime Minister. She became the first woman in Israeli history to lead the country and only the third in woman to head a national government in the 20th century, preceded by Sirimavo Bandaranaike (Sri Lanka) and Indira Gandhi (India). The appointment of a woman as Prime Minister of Israel, a young, embattled country, only two years after the Six-Day War, was not self-evident; however, the chain of political events following the death of her predecessor Levi Eshkol led to Meir’s appointment, who was preferred over such figures as Yigal Alon, Moshe Dayan and Pinchas Sapir.

Only the ultra-Orthodox Agudat Israel party officially opposed Golda’s appointment, with the head of the faction, Yitzhak-Meir Levin, expressing concern that the appointment of a woman as Prime Minister would harm Israeli deterrence. Other than this, there was no other official or public grievance against Golda’s appointment. Meir, despite her image and role, was herself critical of the feminist movement, though she often spoke out as a woman. Nevertheless, the fact of her being the Prime Minister of the State of Israel was a subject of great interest, drawing both outright and hinted criticism.

Separation of Religion and State?

Golda Meir had a complex relationship with religion, dating back to long before her term as Prime Minister. During an official visit to Moscow in 1949 as Israel’s ambassador to the Soviet Union, Golda visited the famous Moscow Choral Synagogue. Photos of the visit were published in Israel and around the world, and upon her return to Israel, Member of Knesset Benjamin Mintz challenged her to pay a similar visit to a synagogue in Tel Aviv, saying “I invite you to the Great Synagogue for a prayer of thanksgiving. Or do you only visit synagogues in Moscow?” Without skipping a beat, Meir clarified that she had entered the synagogue in Moscow and agreed to sit in the women’s section because she wanted to meet the local Jews. But that as far as Tel Aviv was concerned, she would be happy to attend synagogue as soon as equality was achieved and she was allowed to sit in the main hall alongside the male members of the congregation.

Already in the early 1950s, Golda was seen as a possible candidate for the role of mayor of Tel Aviv, which sparked a discussion over a woman’s ability to serve in such a senior position; a widespread, lively debate on the subject was conducted in the media. Miriam Shir wrote in her column titled “What Say You, Woman?” in the Hebrew daily Davar: “We all need you, Golda Myerson, as “the ‘Head Homemaker’ for the city of Tel Aviv.”

After taking office as Prime Minister, senior rabbis in the country expressed differing views on her appointment. The Ashkenazi Chief Rabbi of Israel, Isser Yehuda Unterman, when asked his opinion on the subject, refused to comment, explaining that as long as officials did not seek his opinion on the matter, there was no reason for him to offer one. Israel Prize winner and head of the Chabad religious court, Rabbi Shlomo Yosef Zevin, chose to publicly declare his negative opinion, basing his opposition on Maimonides’ Hilkhot Melakhim. The Sephardic Chief Rabbi of Israel Yitzhak Nissim stated that there was no problem with the appointment, while Rabbi Ovadia Yosef, then the chief Sephardic rabbi of Tel Aviv, was in no hurry to give his opinion, saying only that the matter needed to be studied in detail first.

The Case of the Hat

On Israeli Independence Day in 1973, in honor of the 25th anniversary of the State of Israel, the IDF held its last military parade. It was decided to permanently cancel the custom due to high costs, and this was to be the last hurrah, held in the presence of the Prime Minister who sat on the dais. Shortly after the parade, the Israeli Hatmakers’ Union (it turns out there was such a thing) published an official letter of grievance in a somewhat tongue-in-cheek Maariv article dedicated to the Prime Minister’s sloppy appearance, and the fact that she chose not to wear a hat during the parade. “Mrs. Meir’s bear head, exposed to the sun, served as a negative example to all Israeli women,” the union members wrote, demanding that Meir become a fashion leader and help promote the fashion of hats among Israeli women. The union members even offered to create a special hat model named for Golda, whose sale would compensate for the economic fallout they predicted would be caused by her appearance, which they feared would lead Israeli women to forego hats altogether.

Would a male prime minister also have been criticized for his lack of fashion sense?

After the national trauma caused by the Yom Kippur War which broke out later that year, and despite the fact that the Agranat Commission did not find her directly guilty, Golda was blamed for the outcome. She eventually resigned from her role as Prime Minister in 1974.

Golda Meir became famous in Israel and around the world for shattering a glass ceiling as well as for her lengthy political career. In Israel, her legacy and image, while very well known, are sometimes the subject of controversy, linked mainly to the outcome of the Yom Kippur War and the complacency that had preceded it. Outside of Israel, however, Golda was the subject of great admiration and respect, even during her lifetime. She was named “Most Admired Woman” by a Gallup poll in both 1973 (when she received twice as many votes as First Lady Pat Nixon) and 1974. After her death, New York City named a square after her and a Hollywood movie, A Woman Called Golda, starring Ingrid Bergman, was made about her life.

Recently, it seems that the historical figure of Golda Meir is experiencing something of a revival. Last month it was announced that the Oscar-winning Israeli director Guy Nativ is working on a new film about Meir, who will be played by award-winning actress Helen Mirren. Another project currently taking shape is a television series about the Israeli leader produced by Barbara Streisand and starring actress Shira Haas. The series, titled Lioness and based on Francine Klagsbrun’s biography of Golda Meir, will focus on the former Israeli Prime Minister’s role during the Yom Kippur War.

On the National Library of Israel’s various online platforms, Golda Meir is more frequently searched in English than in Hebrew. It is clear that her past in Israel is perceived differently than in the rest of the world, but as she herself said, “One cannot and must not try to erase the past merely because it does not fit the present.”