From Russian Villagers to Galilean Farmers: The Story of the Dubrovins

Home > History of Israel > From Russian Villagers to Galilean Farmers: The Story of the Dubrovins
Land of Israel

Yoav Dubrovin, a farmer from Russia, immigrated to Ottoman Palestine with his family in the early 20th century | The Dubrovins were among a group of Russian converts to Judaism who settled in the Land of Israel, in hopes of leading a Jewish life | Eighty years later, the family farm is now a museum and visitor’s center commemorating the lives of the area’s early pioneers 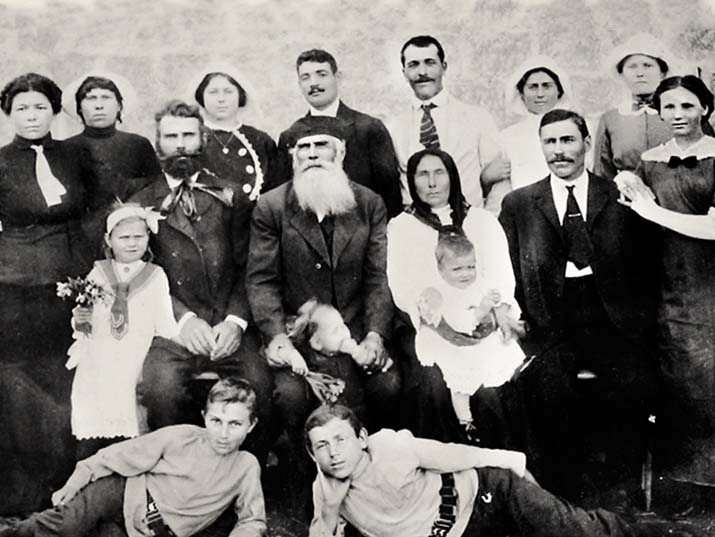 One day, towards the end of the 19th century, in a small village near the Russian city of Saratov, the following strange scene unfolded: a band of Cossacks was making its way towards the village, looking to raid the local families of Russian “Judaizers,” when suddenly they stopped dead in their tracks. Before them, they saw something unexpected – a procession of villagers, locals who were known as “Subbotniks,” were walking towards them, reverently singing verses from Psalms and led by an older man carrying a large Torah scroll.  The Cossacks, the most fearsome of Russian soldiers, were dumbfounded. Finally, the commander called on his men to retreat, and the band turned around and galloped away, leaving the Jews unharmed.

The story of how a group of Russian converts to Judaism managed to evade a Cossack attack, thanks to the intervention of the God of Israel, was retold for many years after. The Dubrovins, the family that led that procession, would settle in the Land of Israel in 1909, in Yesud HaMa’ala in the Hula Valley. They were led there by the family patriarch, Yoav (formerly Andrey) Dubrovin. A solemn and serious brood, the Dubrovins arrived on the land they had purchased bringing with them agricultural equipment as well as knowledge and expertise. They also brought  the very Torah scroll Yoav had carried during his legendary stand-off with the Cossaks, and which can be found to this day in the synagogue at Yesud HaMa’ala. Whether the legend is true or not, it has become part of the folklore surrounding the arrival of those Russian Jewish families in the Holy Land.

The Dubrovin family was one of the most prominent examples of Russian gerei tzedek (lit. “righteous converts” to Judaism) who immigrated to the settlements of the Galilee in the northern Land of Israel. These converts were in fact part of a diverse group of Russian-Christian peasants, who were drawn to Judaism and who began to observe various Jewish customs. Popularly referred to as “Subbotniks,” the origin of the term is the Russian word subbota, meaning “Sabbath”. The nickname was given to groups of Christians who began observing various Jewish commandments, chief among them – the marking of the Sabbath. However, most of these families of converts who arrived in the Land of Israel underwent a “reverse” process: They began by keeping certain Jewish commandments and observing various customs, and only after a period of gradual adoption of a Jewish way of life, to one degree or another, did they undergo a full halakhic conversion.

Yoav Orni, the great grandson of Yoav Dubrovin (who is also named after him), says that his family’s immigration to the Land of Israel had been for purely religious reasons, though it coincided with the parallel activities of the Zionist movement and its emissaries, who were busy promoting Jewish immigration to Ottoman Palestine at the time. Yoav Dubrovin underwent religious conversion even before he immigrated, and during their final years in Russia, he and his family had lived as Jews. The process of conversion to Judaism was a complicated matter for all parties involved: the decision of a Russian Orthodox Christian to convert to the religion of the persecuted Jews was a difficult and courageous one. Meanwhile, the local Jews feared the wrath of the authorities, which could easily suspect them of proselytizing and respond with violence and harsh restrictions. This was one of the reasons that Subbotniks of all kinds, including righteous converts like the Dubrovin family, began to observe Jewish commandments even before they converted.

“Yitzhak, Yoav Dubrovin’s second son, was drafted into the Tsarist army. There was a grave fear that Yitzhak would not be able to keep kosher in the army. This was the last straw for Yoav Dubrovin, who decided to immigrate to the Land of Israel with his whole family to live a Jewish life,” says great-grandson Yoav Orni. Orni recounts how Yoav Dubrovin arrived at the military barracks where his son was serving, bribed the commander, took his son with him and continued on to the Land of Israel. “On the way, the Dubrovins met some Jews who had immigrated there and returned, warning them about the harsh conditions. In response, Yoav said to his family, “Forget these Jews, we are going to the Land of Israel and that is where we will build our home.” They were experienced farmers, with substantial resources, who arrived in the Holy Land to continue living a Jewish life at all costs.

Tough Farmers on Their Way to the Land of Israel

The story of the Dubrovin family’s immigration was typical of their general attitude: they did not come seeking comfort or an easy life, they simply wished to build a safe home for themselves, and nothing was going to stand in the way of that goal. At that time, the days of the First Aliyah, Zionist immigrants and pioneers were finding it extremely difficult to cope with the harsh conditions in the country as well as the demands of an agricultural livelihood, not to mention the competition and occasional conflict with the local Arabs. “Most of them are incapable of being simple peasants, of hard physical labor and making do with little,” wrote Ahad Ha’am at the time about the people of the First Aliyah. Moshe Leib Lilienblum held similar views, pointing out that these immigrants did not possess sufficient knowledge of farming skills —plowing, sowing, tillage and so forth. The righteous converts who had arrived from Russia managed to fill this knowledge gap, and even if they had not come as part of the Zionist enterprise, their presence was a godsend for the early Zionist farmers. At first, the local Jews were suspicious and even acted condescendingly towards the former Christians, who sometimes prayed in Russian alongside Hebrew, and who had their own customs which initially set them apart in the Holy Land. Eventually, however, these differences blurred or gradually gained acceptance.

A few years after his arrival, Yoav Dubrovin went back to Russia for a visit, and returned with agricultural equipment that supplemented his already extensive farming knowledge. Unlike most of the people of the First Aliyah, Dubrovin was an experienced farmer, accustomed to hard work and scarcity. In 1909, after several years of farming in various settlements, Dubrovin purchased land near Yesud HaMa’ala (the land was offered to him free of charge at first, yet he refused to accept it as a gift) and established the Dubrovin farm, one of the best examples of local agriculture during this period. The estate is built in a European style, resembling a fortress; its buildings are built around an inner courtyard and connected to each other, creating a structural wall which provides protection from any outside invasion. Inside, the Dubrovins built one of the grandest and most prosperous farms in the Land of Israel at the time. On it, they raised bulls, cows, geese, horses and chickens while cultivating grain and wheat as well as other agricultural crops and fruit orchards. The extended family lived on the Dubrovin estate, alongside workers who joined the farm and lived in subsidized housing nearby.

Yoav Dubrovin, who was already 70 years old when he immigrated, was largely able to realize his dream. The estate he built was a model of local farming and was recognized by the local authorities for its achievements. Dubrovin himself lived to the ripe old age of 104, but many of his family succumbed to disease after immigrating. During this period, the last days of Ottoman rule in Palestine, most of the land’s inhabitants lived far from malaria-stricken areas, but the Zionist settlers and the gerei tzedek had no choice but to establish their settlements in less-desirable disease-ridden areas. Thus, in addition to their alienation from local Jewish-Hebrew society due to their religious roots, the righteous converts also had to struggle with health-related issues.

Malaria, transmitted by the Anopheles mosquitoes that multiplied in the Galilee swamps, devastated the Dubrovin family. Near their estate was a small swamp the malaria researchers in the area called “Dubrovin Swamp,” from where the mosquitos reached the family farm. The first to fall victim was Yoav’s son, Yaakov, followed by his eldest son Avraham. Three of Yoav Dubrovin’s grandchildren also fell ill and died at a young age. Dubrovin, who dealt courageously with this as well as with repeated attempts at theft and burglary on his farm, was finally forced to give up. Having no choice, he moved to nearby Rosh Pina, leaving his son Yitzhak to maintain the farm. Yoav Dubrovin and his wife were deeded a new plot of land and established another small farm. However, malaria struck again, killing Yoav’s youngest son Ephraim, his son’s wife and finally Yoav’s wife Rachel. Dubrovin finally died in 1935, at the age of 104.

The Dubrovin family, like the other families of righteous converts who immigrated to the Land of Israel in the early 20th century, merged into the country’s Jewish society. Yitzhak Dubrovin, Yoav’s son who remained on the farm after his father left, continued living there well into the 1960s. He finally left as well in 1968 and bequeathed parts of the farm to the Jewish National Fund. Twenty years later, a special association dedicated to the farm’s restoration was established, along with a museum that recreated the Dubrovin family’s pioneer settlement living conditions and agricultural work. The buildings, orchard, furniture and agricultural equipment were restored and farm animals were brought in. The site has become the documentation and conservation center for the nearby Yesud HaMa’ala settlement. The visitor’s center, opened in1986, is considered one of the most developed and successful conservation sites in the country.