A new cinematic adaptation of Frank Herbert's science fiction classic was a great opportunity to speak with Emanuel Lottem, who translated Dune into Hebrew. The result was a fascinating conversation about fantasy literature in Israel and how Lottem came to translate the book while enlisting the help of his colleagues at the Foreign Ministry… 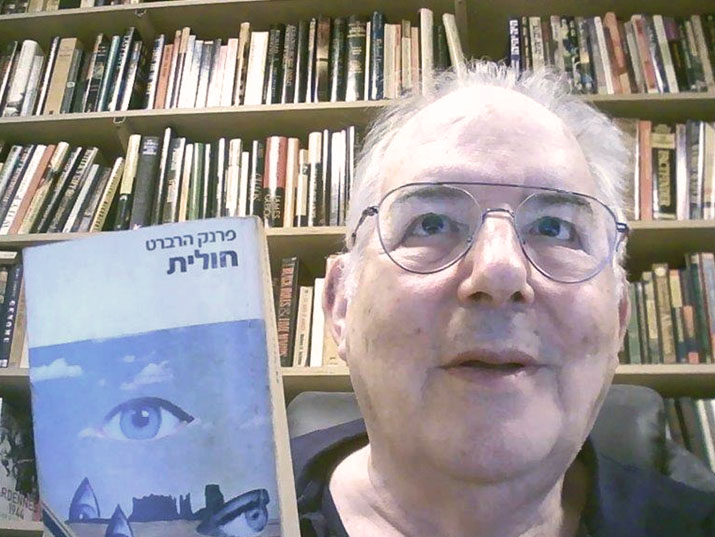 The name Emanuel Lottem is familiar to all Hebrew-reading fans of the fantasy and science fiction genre. Lottem, who began his career as a translator in the 1970s, has translated dozens of genre books—from the greatest classics in the field to the most recent titles. Along with being one of the most prolific Hebrew translators in the realms of popular science, science fiction and fantasy, Lottem is also a founding member of the Israeli Society for Science Fiction and Fantasy, serving as its chair from 1996 to 2001.

On the occasion of the release of the new Dune film, we spoke with the Hebrew translator of Frank Herbert’s classic, the Hebrew edition of which has remained in print for over 40 years, consistently connecting with new audiences over multiple generations.

How did you get started as a translator, and why science fiction?

I had just started working at Tel Aviv University and the salary wasn’t that great, so I was looking for some extra income on the side. Through a family friend at Am Oved Publishers, I started getting offers to translate books. When Am Oved began publishing its “White Series” of science fiction books [named for the white paperback covers – Ed.], I told the publishers that I wanted to translate books for this series. Their answer was: “You’re a serious person. What’s a serious person like you doing with this nonsense?” But, one day, the editorial secretary called me and told me that they were interested in translating a book called Dune. Naturally, I agreed at once. I was familiar with it since it was a book I really liked. That was in 1976.

How do you approach the work of translation?

When the opportunity arose to translate Dune, I was already working at the Center for Political Research and Planning at the Ministry of Foreign Affairs. It was a civilian intelligence analysis body within the Foreign Ministry, set up following the Agranat report [commissioned by the Israeli government to assess failings during the Yom Kippur War – Ed.]. We worked from an off-site campus where there were lots of young and lively people. The atmosphere was one you would associate more with university student life than with the usual image of the Israeli Foreign Ministry. I discovered that many of my coworkers were science fiction fans. After I’d got the call from Am Oved, during the morning coffee break in the cafeteria, I told them about the book I was going to translate. They were very excited, immediately offering to help. So I delegated a few of the tasks involved in the translation.  The late Meron Gordon, who eventually became ambassador to Warsaw and Moscow, took it upon himself to find the verses from the Bible that appeared in the book, so that we wouldn’t end up translating the Bible into Hebrew. Erella Hadar, who later became ambassador to Prague, undertook to translate concepts from the feudal period that also appeared in the book. David Matnai, later ambassador to several countries in Southeast Asia and an expert in classical Arabic, agreed to correct some phrases in Arabic that were inaccurate in the original version.

I typed out the translation of the book by hand, and then the secretaries at the Center happily typed  a clean copy—on a typewriter; back then, there were no computers or word processors. The order of work went like this: I translated, my colleagues commented and corrected, and then a final copy was made, which I submitted to Am Oved. Not only do I thank them on the first page of the Hebrew version, but the sharp-eyed reader will notice that in one of the appendices at the end of the book, which describes the establishment of a certain religious council, I used for it the acronym of the organization we were working for at the time.

In an interview with Haaretz, you mentioned that this is one of your three favorite science fiction books. What is it about this book that you like so much?

The book’s psychological depth, the breadth of the plot, and the character development. Science fiction from the 1940s and 1950s is still my favorite, but the characters are usually two-dimensional and lacking in depth and development. In Dune, the reader follows the development of the characters, and as the book progresses, you discover more and more layers to them. This is some true artistry from Frank Herbert. I especially like the idea of ​​what foresight means. Let me explain: there is a character who can see the future, but what he sees it in a similar way to Borges’ The Garden of Forking Paths. He sees the paths and wants to choose one path or avoid the other—and without giving away too much, because I don’t like spoilers—his dilemma is about choosing the right path, when in the middle there is an abyss, and he can’t see where the paths split. It’s not a self-fulfilling prophecy; foresight is a much more complicated and deep phenomenon.

Can the person who “sees the futures” choose the right future? That’s the book’s big question.

What were the challenges you faced in translating? I understand you had a difficult task adapting the book into Hebrew.

In today’s computer age, I can correspond with authors and ask them questions. Back then, we never met. What were the challenges? To replicate the book’s depth. It’s easy to do a superficial, literal translation, but if you want to do it well and capture the book’s psychological depth, you need to put in more effort. On the other hand, the mysticism in the book translates well from one language to another. It’s often challenging to translate Hindu or even Christian mysticism, and you need to think about how to convey the spirit of the text without getting into Jewish mysticism, because that’s not the author’s intention. In this case, the mysticism is Muslim-Jewish. There’s a character who is described as the   “Kwisatz Haderach” [kfitzat haderekh is a Kabbalistic concept in Hebrew meaning a miraculous leap from one place to another – CM], so in this respect, I was on solid footing.

How is the original different from the Hebrew translation? Obviously, you didn’t touch the plot.

The Arabic in the original book was not very accurate, and as I mentioned before, David Matnai helped me a lot with this. For example, pretty much in the beginning of the book, the main character Paul arouses the admiration of another character who comes to investigate and discover who he is, and she utters a cry of wonder and admiration—kul wahad! Kul wahad is not an exclamation of admiration in Arabic. Matnai gave me a better word expressing admiration in Arabic—aj’aib—which means  “wonder of wonders!” There are a number of little examples like that throughout the book.

Can one translate a book one doesn’t necessarily like?

I try not to. The choice is a little more limited today. I used to be able to pass on something like that if it came up. In principle, one can translate a book one doesn’t like, because the work of translating is, at its core, technical. Art comes on top of the technique. With Frank Herbert, I went to great lengths to ensure that if there were mistakes, they would be corrected in the Hebrew. There were books where I didn’t do that.

What do you read in your spare time?

I read mostly science fiction, but also fantasy. I have a problem with the fantasy genre, though. For me, everything written after Tolkien—it’s just not the same. Here and there, you find a pearl.

To this day one hears things like “If it’s fantasy or science fiction, I’m not reading it.” Do you feel that even today the perception is that these are inferior genres, and that perhaps the boundaries of the fantasy  “ghetto” have not yet been breached?

The fantastic genres emerged from the literary ghetto largely thanks to Ursula K. Le Guin. The older generation in Israel, the generation that believed that books had a mission—Zionism first and foremost, of course—that generation saw science fiction as a waste of time. They didn’t consider, for example, that Altneuland [a utopian novel written by Theodor Herzl in 1902 – Ed.] is a science fiction story. And when asked what about 1984, and Brave New World—they would say that it was  “fine literature”, not science fiction.

This feeling has slowly been fading in recent years. If it could be said about Ursula K. Le Guin in the 1980s, then in Israel it could only be said in the 2000s, now that original and respected writers like Shimon Adaf are writing fantasy. Perhaps Adaf is our Le Guin.

Science fiction is no longer ridiculed in Israel. This, by the way, is why science fiction enthusiasts tend to organize and meet at conferences—to spend time with like-minded people a few days a year, who love what they love and who don’t look down on them. When I was still chair of the science fiction society, I would hear things like “ninety percent of science fiction is garbage.” It really made me angry, and I felt that because of my position I had to respond. Then I thought to myself, if it’s only ninety percent, then we’re in pretty good shape compared to general literature.

What translation are you most proud of?

No question at all, The Lord of the Rings and its various sequels—including most other J. R. R. Tolkien books that appeared in Hebrew. Some of these works were originally published in English only recently, not just the Hebrew translations. We have yet to see another writer of Tolkien’s stature. There hasn’t been another and I hope there will be, but I cannot see where they might come from. He was a singular, unique writer in his generation, in every sense. For me, he was everything.  It was an honor to translate his work into Hebrew.